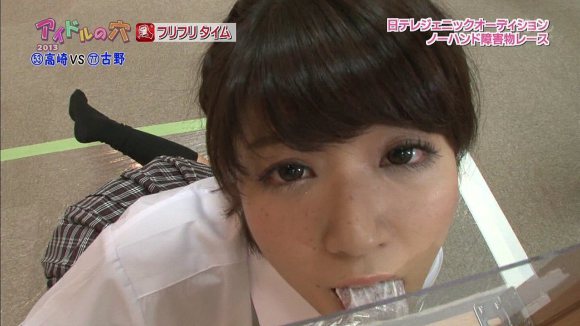 Girls fight off for a chance to become next year’s biggest idol, and they are subjected to many allusive tests among which the aforementioned lickings, sucking stuff from tubes, disrobing mannequins without using their hands and openly changing into cosplay costumes – freezing mid-gesture whenever they are told to, to allow a lecherous cameraman to better expose them.

Japan has many unusual customs to westerners’ eyes, that’s true. But equally true is that it isn’t half as crazy as our media paint it – especially when it comes to sex. It’s just a matter of context. To understand three quarters of it you just have to remember that it is a Shintoist and Buddhist country, blissfully free of the absurd sense of guilt and shame the Christian, Jew and Islamic religions impose on sex and sexuality. As soon as genitals are just another body part and sex is just a common, everyday activity, approaching it playfully and publicly appears much more reasonable. Shows like Idol no ana do receive some flak by moralists, but most people see them as nothing more than one variation among many – on the same plane with cooking, fitness or music shows.

The second important aspect to consider is how Japan remains a very formal society. Just look at the beginning of the Orgasm wars clip: a differently-oriented stranger comes up to forcibly suck you off before cameras, and the normal reaction is to politely exchange business cards, bow and very quietly state that you won’t succumb to his techniques. Most American males would have run away shouting insults, terrorized they had “turned gay” just because they were in the same room as one. Most game shows are not about skill, but about not losing face – that is, keep your honor and your family’s high even in the face of adversity. Accepting any challenge, no matter how weird, is a big part of it.

Knowing all of this, eastern kinky shows take on a very different meaning. They can be shocking, controversial and ridiculous, but not as alien as they look at a first glance. After all, it is just a matter of remembering that everybody lives sex in a different way – and until they remain safe, sane and consensual, no interpretation is “better” than the others.

Featured image courtesy of Rocketnews24
Have an amazing experience or tips you like to share on SimplySxy? Drop us an email at editorial@SimplySxy.com!

What’s your training style to keep your Subs obedient?
The Single Male’s ‘P’s and Q’s’ to Swinging
Advertisement

The Secret Life Of A Hotwife (Chapter 1) – Introduction To Hotwives