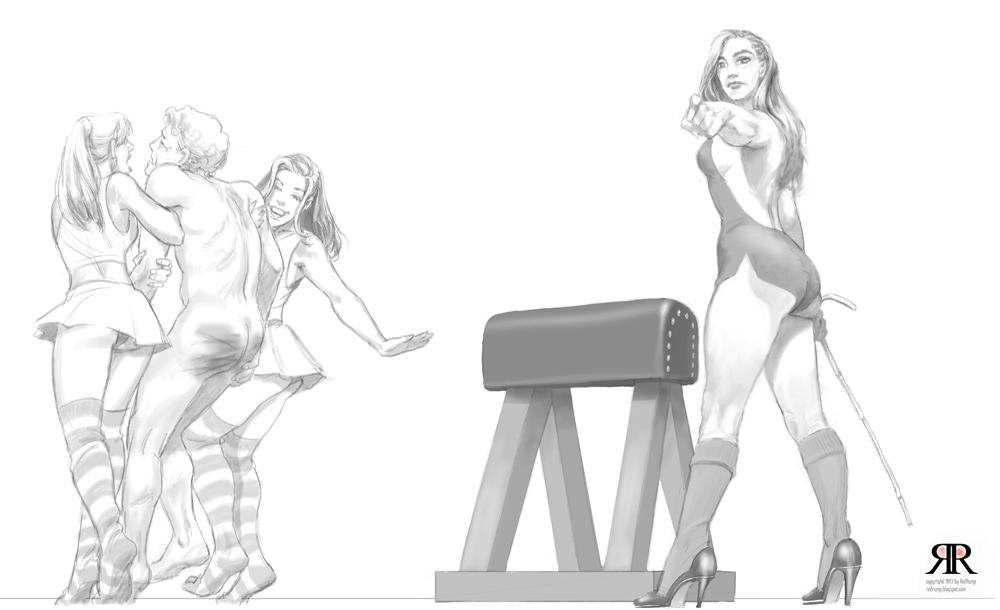 For spanking enthusiasts, even the mention of the ‘S’ word can trigger switches in the libido. Spanking fetishes go han 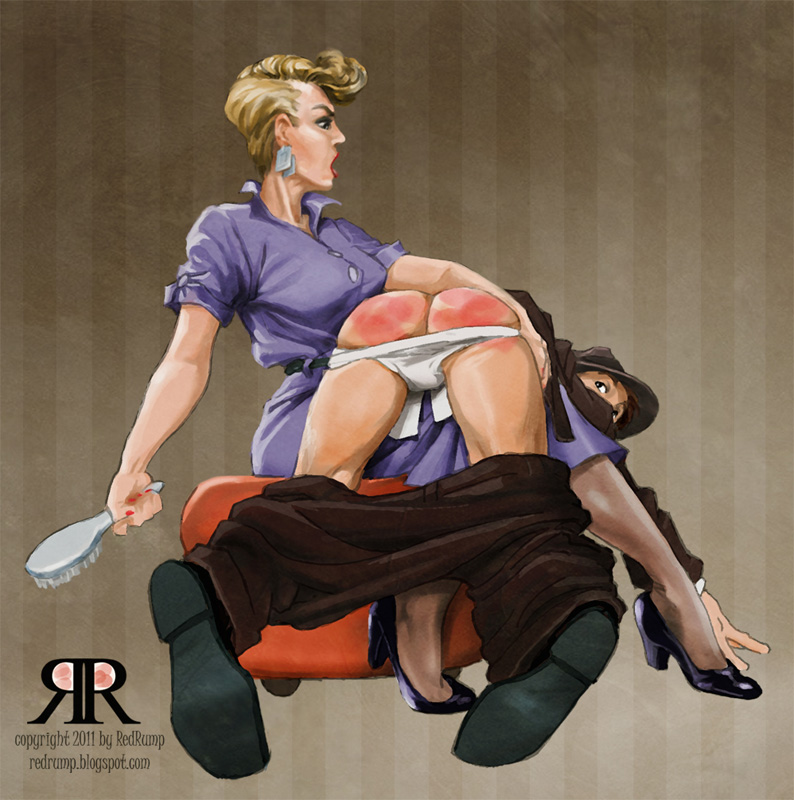 d in hand with active imaginations and as an artist, I believe that art is one of the most potent sparks to human imagination. Put art and spanking into the same mix, and pow! It’s an ideal coupling, and spanking/corporal punishment artwork abounds in huge volumes, as even a casual search of Tumblr will demonstrate.

Why is there such a proliferation of spanking and C/P art out there? I suppose the question should really be—what is it about spanking and ritualized corporal punishment that appeals to some people on a sexual level? And I don’t believe that has a simple answer. It is often not a purely masochistic impulse. The pain is essential, since without it, there is no incentive for the anticipatory suspense, the adrenaline rush of fear, or the release of endorphins as a countermeasure. For some, it is the thrill of finding pleasure in acts which are not meant to be pleasurable, a sort of forbidden fruit; for others, it may be a role reversal that helps offset power hierarchies we are forced to deal with in everyday life; for some, it is a release of the inner child; still others just enjoy the jolt that a smack on the buttocks sends through the body’s nervous system directly to the genitalia. (studies have actually been made that prove this to be true).

I am not a psychologist and won’t pretend to sound like one. There are plenty of qualified opinions out there worth more than mine. Yet, in spite of clinical analysis, there remains a strong air of mystery over the appeal of spanking, and the many varied role-playing scenarios that surround it. Mystery itself has an irresistible and universal appeal, and the most enduring mysteries are those which invite exploration, but forever elude exacting, scientific conclusions. Spanking and C/P meet those criteria like a glove.

As an artist, that makes the subject irresistible – not just as an exploration into human sexual psychology, but on a 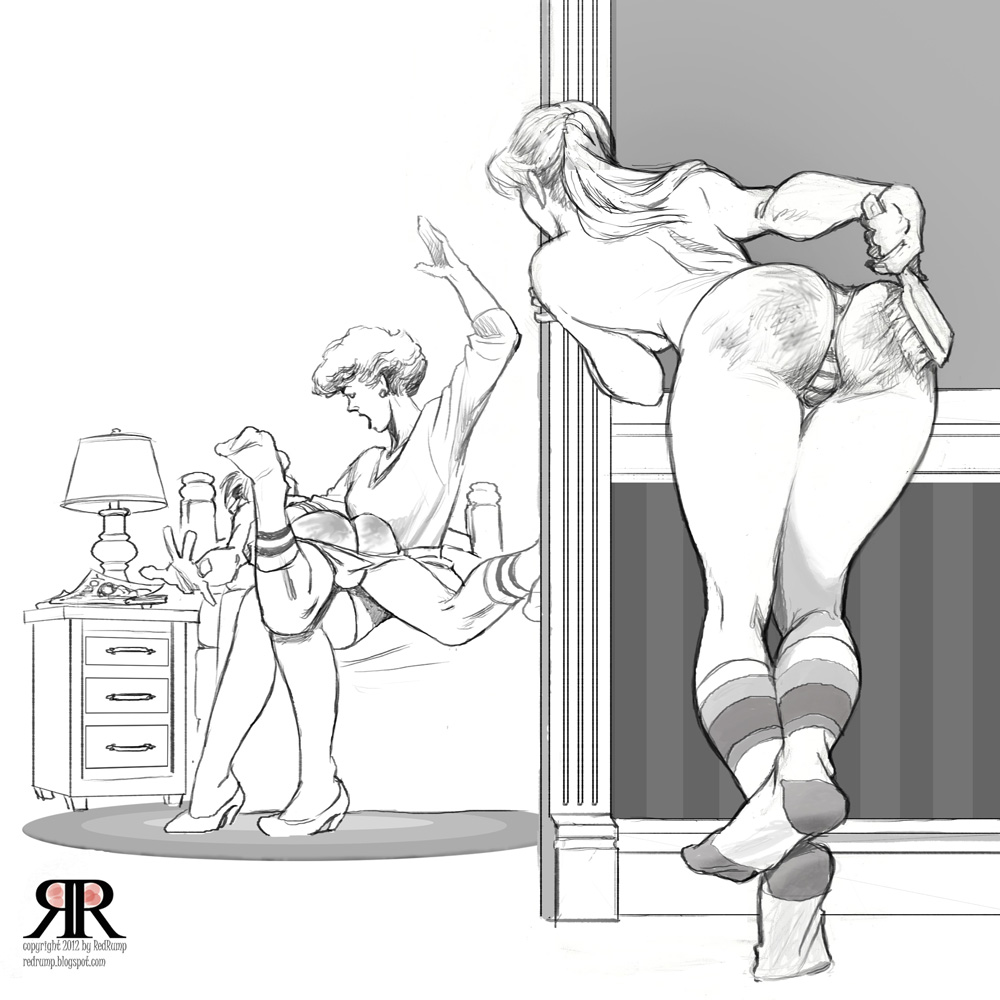 personal level as one with a lifelong fascination for spanking. Illustrating the fantasies that a spanking fetish evokes is both a challenge and a cathartic release. I enjoy attempting to capture a particular moment, or suggest a story with a single image. It might be the husband who came home drunk at 3 am to find his wife waiting with a hairbrush in hand, or a still defiant spankee being sent to fetch a more formidable weapon, or a young lady who planted a Playboy magazine in her brother’s room so she could spy on Mom spanking him for it. To be sincere about art, I think one ought only do what appeals to oneself, and not attempt to cater to the viewer. Those of a similar mindset will respond, and the heck with the rest.

That is why I only illustrate female dominant situations. Male dominant scenarios are far more popular, and I could reach a much broader audience through that approach, but reaching that wide audience is not why I do art. I would rather engage with a smaller, kindred audience. Whether it’s an angry 1950’s housewife, an outraged babysitter, a stern teacher, a professional disciplinarian, or a vixenish girlfriend, those are the iconic female images that never cease to awe, and perpetually wield sovereign power over whatever corner of the male psyche that resists the inevitable progress of ageing. Illustrating boyhood fantasies about womanly laps and deliciously stinging backsides keeps the inner child alive and the imagination active and healthy.

Nobody has ever said it better than Jean-Luc Godard:

“Art attracts us only by what it reveals about our most secret self.”

All images courtesy of RedRump
Have an amazing experience or tips you like to share on SimplySxy?
Drop us an email at editorial@SimplySxy.com!

I am a commercial artist and art lover who combines his love of art with a lifelong fascination for spanking and female authority figures, especially those of a 50’s retro appeal. Over the years, my tastes in art have matured, but my enthusiasm for the sight of an inviting lap and the thrill of being hauled over it has been one of the few constants in life.