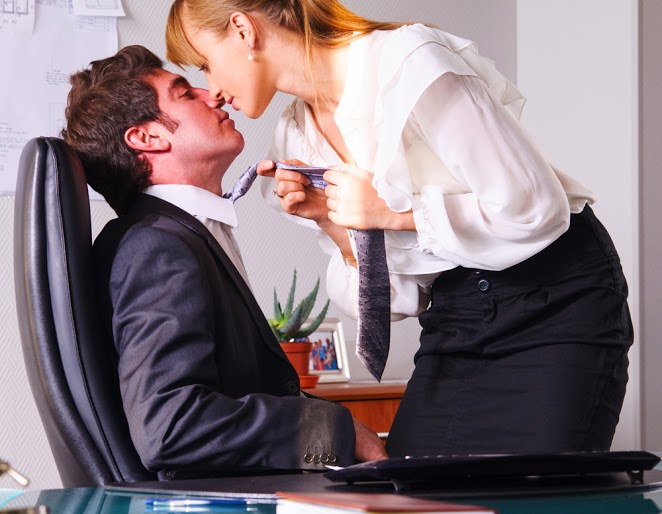 Have things been steaming up at work lately? Been thinking about taking it one step passed the flirting game with a certain coworker who makes your knees weak? Here are a few things you should consider before getting down and dirty in the stockroom.

Romantic/sexual relationships in the workplace have existed, well…since there were workplaces. It usually starts with an innocent smile,a soft compliment, and then the “accidental” brush-up. This of course, often leads to acts of a more explicit nature— like boardroom table bang bang. But just how much sex is really going on at work?  According to a survey conducted by Workopolis.com–Canada’s biggest job site—63 per cent of workers say they’ve been involved in a romantic relationship with a coworker; however, only 57 per cent of them feel that romance in the workplace is acceptable. Should this be surprising?

“This is not surprising at all. In fact, these numbers may be somewhat low because of response bias,” says Marilee Zaharia, Ph.D., and Clinical Psychology Intern with the Dept. of Clinical Heath Psychology at the Royal University Hospital in Saskatoon, Saskatchewan. “The reasons for this high percentage could simply be the easy access (and availability) of a partner, and the fact that we are working longer hours than previous generations,” she adds.

And what about plain old boredom; could the monotony of daily routines and repetitive tasks act as an accelerant for our natural, sexual impulses? “Yes, particularly when a person is looking for ways of putting extra stimulation in their life,” agrees Dr. Zaharia.

“Dating coworkers can be lots of fun, especially between peers; and when you know all the little hiding places,” said Julia, an Information Management Analyst for a high-tech company in Kanata, Ontario.Interestingly, hiding seems to be the norm here; she adds that most of her coworkers/friends who are involved in relationships try to keep them low key, and sometimes even covert. “Even though the company doesn’t enforce a dating ban,” she says, “the social pressure not to date coworkers is still present.” While professional workplace environments—such as high-tech companies, government office buildings, law firms, etc. —do offer some insights concerning workplace romantic/sexual relations, they represent but one side of the social workforce.

When I told Mike Wodicka, a server with 10 years of experience, about the Workopolis survey, he said, “Take one of those at any restaurants I’ve worked at, and the results will be close to a hundred per cent!”Although a statement like this might lead some of you more depraved individuals to run out the door to drop off your resume at every Denny’s in town, you’re better off taking a cold shower. However, from my own personal experience in the service industry, Mike’s statement rang pretty true.

Several years ago, I was working as a server at a well known chicken and ribs franchise. I spent two years there. While the majority of employees were college students,some were still in high school. At times, there was ten to fifteen servers working, plus take-out girls, cooks, dishwashers, bartenders, hosts, delivery drivers, and managers. It wasn’t long before I realized that this little self contained society, like many others (high school comes to mind), had its hierarchies, gossip, and scandals. However, it wasn’t until I started going out for a beer after work that I really grasped how much sex was going on. The manager was sleeping with the take-out girl, one bartender had a hostess and waitress fighting over him, the owner was having an affair with a 21 year old waitress (and everyone knew it except his wife – or did she!?), and chicken wasn’t the only thing the cooks were choking … I mean cooking. Out of over twenty servers, only three were men; and one was gay. Paradise?!

The restaurant was more like pagan site of sexual worship than a workplace. As Dr. Zaharia says, “…the opportunity for sexual relationships to occur may be increased within the workplace, particularly when workers actively socialize within their work environment.” The high amount of overt, romantic/sexual relationships between coworkers in workplace environments such as restaurants, retail stores, shopping center boutiques among others, appears to be due to the social groups who make up the majority of these work forces: high school and college students who work part-time; many of whom are single and live at home.Unlike many other professionals with spouses/families, careers, and financial responsibilities to think about, these young people feel less inhibited to engage in overt work place relationships. Dr. Zaharia agrees and adds that, “The penalties/complications of relationships amongst coworkers are much greater than those in non-professional workplaces.This lack of inhibition leads to a complex, tangled network of promiscuous relationships; and unlike computer networks, the inevitable crashes are not of an electronic nature but of an emotional one.

Several months after I had started working at the restaurant I came to realize that our little, licentious tribe was not immune to spite and jealousy. I myself did not suffer much, but I did see many employees, usually young women, being harassed by the managers. There was also a case of sexual harassment pending against a dishwasher when I resigned; although I later heard that it had been dismissed, the reality is: sexual harassment is a serious byproduct of romance in the workplace. “I’ve known of a couple coworkers who’ve been fired, transferred, or that simply quit because of constant harassment after a romance with a superior went bad,” says Julia.

Most, if not all companies have in one form or another, sexual harassment policies. Such policies exist to protect the employees’ rights, and to deter anyone from carrying out any act of this kind. But to what degree are these policies effective in preventing incidents? Dr. Zaharia says, “The policies are likely more effective in preventing incidents if both (or more) parties involved have been reviewed the policies and they engage in behaviors consistent with the policies.” Finally, she adds, “The degree of whether sexual harassment policies work will likely related to the social atmosphere of the workplace and the ratio of male to female coworkers.”

While there are men who do sexually harass women—and they should suffer the consequences—there are also women who abuse these policies by making false claims out of spite.It happens. So gentlemen, beware, and exercise good judgment before taking out, the take-out girl. False accusations of this nature can wreck havoc and dent futures. Be it overt or covert, most employers would likely agree that a romantic/sexual relationship amongst coworkers is a double-edged sword. While some employees surly become more productive when engaged in a romantic relationship with a coworker, others do just the opposite. Dr. Zaharia somewhat disagrees and says that overall, there is a decrease in productivity—depending upon how much the work product/service is related to participation of both parties.

Many companies enforce interoffice dating bans. Are these bans a waste of time? I think so. And the reason is self-evident: if two coworkers—who are infatuated with one another—cannot safely date overtly, then they will do so covertly. Most of us spend a third of our adult lives at work; we spend another third sleeping; and after running trivial errands, there isn’t much time left for our most primal instinct: sex.When opportunity knocks, genetics always answer.

Dating coworkers definitely involves risk; but if one keeps one’s wits about him/her, work can feel like a five-star vacation. As the philosopher/poet William Blake put it “To deny our own impulses, is to deny the very essence that makes us human.”

Marty Masterson is a Canadian freelance writer that’s been living and traveling in Asia since 2003. He currently resides in Phuket, Thailand with his wife.

Have a story or opinion you wish to share on SimplySxy? Submit it here at https://simplysxy.com/submissions/

You may also like...
Related Topics:Office Sex, Sex Education, Submissions