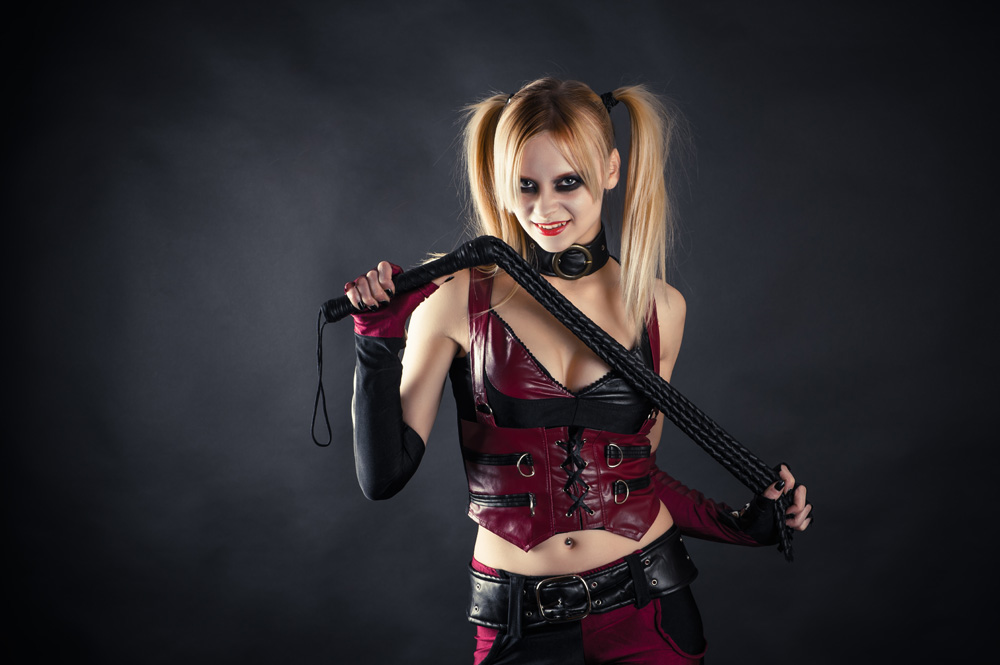 Hi, I’m Julie (not my real name), and I write a blog concerning the kinky play that my husband and I get up to (that we call “Scening FLR”). The blog is “Strict Julie Spanks!” Please visit!

FLR stands for “Female Led Relationship” where the woman takes the lead and the man obeys. In the kitchen, in the laundry room

, and especially in the bedroom. The woman has full rights to punish her man for misdeeds, for poor attitude, or just to periodically remind him who wears the pants in the family.

I understand that many times the FLR is full-time and for real; however, my husband and I practice a different type of kinky FLR that we call a “Scening FLR”. Most of the time we are a completely normal couple in all regards, with equal division of duties and responsibilities, and always mutual love and respect. However, while neither of us want to live full-time in an FLR, both of us enjoy pretending to from time-to-time!

You see, my man gets off on being dominated by a woman in a domestic setting. Not by a leather-clad woman in a dungeon wielding a whip; but by his jeans-clad wife, in the home, wielding a hairbrush, ideally while his wife’s sister or friend looks on with a “tsk-tsk” expression on her face. My husband admitted this aspect of himself to me only several years after we were married. I was angry when he told me so, not because he’s a total perv, but rather because he took so long to tell me! I was only too happy to pull down his pants, put him across my knee, and blister his buns with the back of my stout wooden hairbrush.

While it was nice of me to do that for him, I found that I really enjoyed it at the same time. I enjoyed the power of making him suffer across my knee. Especially as he was so grateful afterwards, despite (or because of?) the state of his poor little bum, and would literally get down on his hands and knees and kiss my feet for doing it. Power trip! And it’s the sort of power trip that makes me tingle “down there”. So much so, in fact, that it made perfect sense to me to drag him to the bedroom, force his face squarely between my legs, and make him lick me until I was very well satisfied.

After that pivotal event, I started quizzing my man on his little kink. Turn ons, turn offs, and that sort of thing. I learned of his deep excitement over being dominated in a domestic setting, and of being humiliated to a certain extent (in a “loving” way, for “his own good”), and especially how the thought of involving other women in our play greatly excited him. I started surfing the web and finding all sorts of material out there, and learning that my husband falls into a certain “class” of kinky guy, all of whom display remarkably similar characteristics. I also found that all of it just plain turned me on as well, and offered us the chance to really turn up the heat in the bedroom.

We started putting time aside for “scening”. This is where we discuss what we want to do, get into character and go to town. It’s just role playing, really; although, we don’t role play as nurse and patient, or teacher and student; rather, we “role play” as wife and husband (albeit engaged in a kinky FLR).

We evolved from putting time aside and discussing in advance to where we are now: I “turn it on” at any time, at any place, entirely at my discretion. He has no say in the matter and does not want any.  After a scene we always debrief so I can learn what he liked and what he didn’t, and out of that comes variations that I might reserve for next time. I also get ideas from the web and spring it on him. If I cross any boundaries, he’s to let me know and I will desist. However, it seems that he wants to encourage me further and has been pushing his own limits so as not to disappoint me.

So what is a typical scene?

“David! This kitchen is a mess! I want you to go upstairs, get into your schoolgirl outfit, and then get back down here and scrub this kitchen clean. After that, we’ll have a nice long session across my knee with the hairbrush for neglecting your chores!”

Cleaning the kitchen is not really “his job”. We are both responsible adults sharing

a home, and we naturally take turns at it. If the kitchen is not clean, it is equally my fault as it is his. But if I notice it needs cleaning, and if we both seem to have the time and inclination for a scene (he ALWAYS does!), I may as well use that as an excuse. Bonus: I get to sit on the couch and surf my iPad while he is cleaning up the kitchen, and doing a really thorough job to boot!

Let’s analyze it some more. “Schoolgirl outfit?” Yup. My man is not at all a cross-dresser. But he does crave humiliation at the hands of a dominant woman. What’s more humiliating for a macho man than to be made to dress the part of a schoolgirl? Oh, and it’s a “sexy schoolgirl”: stockings

, garter belt, lacy panties, lacy bra with breast forms, white blouse tied so as to bare his midriff, and a short plaid skirt. None of that outfit is his doing. He blushes three shades of red while wearing it. And did I mention our inclination to involve other women in our scenes? Yup! He’s been witnessed like that! Ha Ha!

And on that point, where do I get that stuff in his size, you may ask? Why, we go out shopping together. Several very memorable trips to the lingerie stores where the sales girls are told who it’s for. For example, we bought bra and breast forms at Victoria’s Secret. The sales ladies were extremely accommodating

. We had three in fact. He was measured, and he had to try the bra on over his T-shirt. It was the shop lady who suggested the breast forms (good salesperson!). David blushed, stammered, and looked at the floor so much during that scene that I thought he would die from humiliation. We had a changing room

, but the three sales ladies kept going in an out, and seemed quite careless regarding leaving the door open so that multiple women shoppers got an eyeful of my husband trying on his pink bra. It was hot! (you can read all about that on my blog at “Bra Fitting at Victoria’s Secret!“) I also learned that I enjoy putting my husband through his paces in front of other women: “He’s mine! Look what I can make him do!”

But I digress. Let’s get back to the scene.

After the cleaning he stands at attention while I inspect. It better pass muster or he’ll get a belt whipping to his sorry little ass after I’m done with the hairbrush! I’ll then drag him by the ear to the living room where I have set up a straight-backed wooden chair with my hairbrush lying across the seat. He gets scared when he sees that hairbrush and with good cause! I pick up the hairbrush, sit down, and pull my naughty little “girl” across my knees. Then it’s skirt up, panties down, for a nice long hard hairbrush spanking that has him howling (he is perfectly capable of staying silent, but I told him I like it when he “lets it all out” like a baby). Then it’s over to the wall where he must stay, holding up a coin with his nose, for fifteen to thirty minutes. During this time, his skirt is up above his waist and his panties are down around his ankles. I’ll typically sit there and surf, from time to time looking up and enjoying the shades of red I painted onto his posterior.

And if the coin were to drop? Well there’s a rule for that and it must always be consistently applied. In that way, the woman in an FLR is much like a parent to their child. If they are going to make a rule and set out a consequence for breaking it, they better be prepared to follow through with consistency. If the coin drops, it’s back across my knee for a repeat of the hair brushing, and then he must re-start his time out RIGHT FROM THE VERY START.

How about spanko boy, you ask? Sometimes after a session like that, I’ll allow him to jerk himself off while I watch, whispering in his ear how much fun it would be if I invite my sister over next time he fails in his kitchen duties … 🙂

I'm Julie, a married woman in my thirties, no kids. I am adventurous and outgoing, and I think my man might have created a monster when he first asked me to spank him!