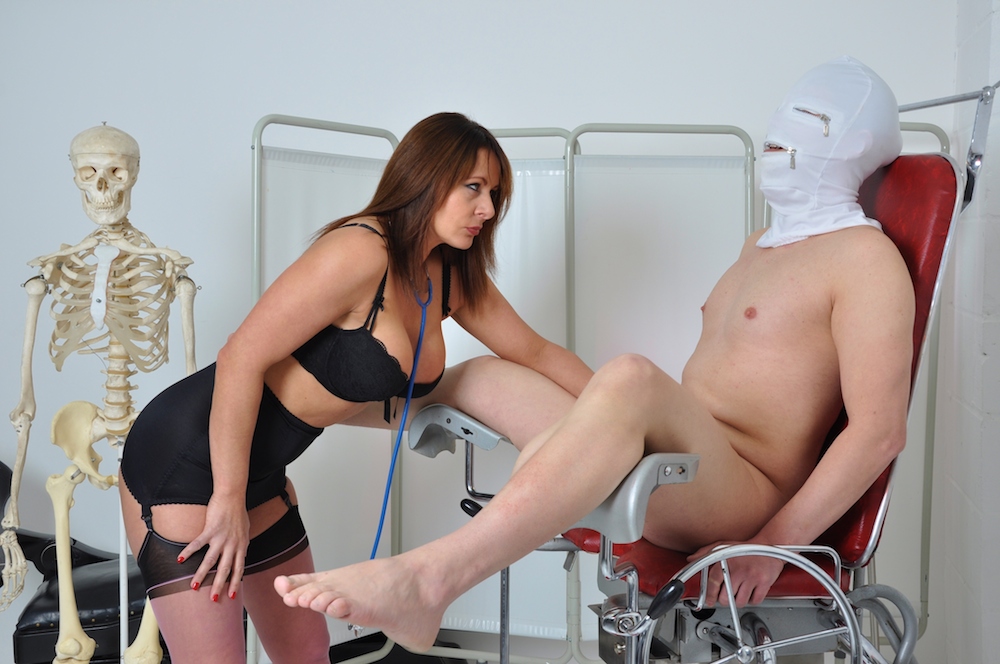 My chosen profession would obviously indicate that I am of a broadminded disposition and there’s little that fazes Me when it comes to sexual kinks – plus I have always been adventurous and willing to experiment and try new things.

As a result, I have enjoyed an extremely full and eclectic sex-life since My late teens and there’s little that I haven’t tried, as I always say, “don’t knock it until you’ve tried it” (well with a few exceptions that just don’t appeal to Me as a personal preference).

I am of the opinion that indulging our sexual kinks and fetishes is the perfect way for us to spice-up our sex-lives as, let’s face it, just indulging in ‘vanilla’ sex all the time could become a little tedious.

It basically involves coaxing a sub’ male to produce a particularly copious quantity of semen to prove his devotion to me (his Mistress) using various techniques and/or specialist equipment – possibly multiple times during a session if I so demand.

I have invested in equipment designed specifically for this purpose – My favourite device being a Venus2000 ‘Milking’ machine which I had shipped specially from the USA at considerable cost some years ago.

This machine produces a powerful pulsating suction action within the receiving tube – a clear cylinder into which the slave’s erection is inserted – and I am then able to adjust both the suction power and speed intensity of the device using a remote-control unit.

This device produces a similar action to the heavy-duty apparatus designed to milk cows, rhythmically sucking at the slave’s penis and building up pressure so as to literally suck every last drop of spunk from his balls!
With practice, I have discovered that I can also employ the use of electrics (such as a shock delivered to a steel butt-plug inserted into the stave’s anus, just at the moment of ejaculation) will stimulate the prostate gland and induce an intensely powerful orgasm.

So, by the time I have finished ‘milking’ a slave during a session in My playroom, he can be sure that his balls will have been totally drained of every last drop of sperm (indeed, slaves leaving barely able to walk after the experience, is not uncommon!).

Well, of course it is an act of total submission To Me, for a slave to surrender himself to Me, and offer his most intimate parts purely for Me to do whatever I wish to!

My favoured way to ‘milk’ a slave is to secure him naked to My St Andrews cross or on My punishment table, which is complete with gynaecological stirrups to secure his legs in position to allow Me free and unfettered access to his genitals.

To then have a powerful suction device attached to his erect penis and lay there knowing that I have total control over how high and will choose to crank-up the machine must be terrifying for the naked slave strapped into position – LOL!

The end result is to see how much semen I can extract from a slave’s balls and he will therefore hope to impress Me with the amount of ‘cream’ he produces – although if he fails to do so, he will expect to receive a suitable punishment for disappointing Me!

I pride myself in having taken the practice to a somewhat more sophisticated level by honing My expertise through repeated practice on (un)willing subjects to attain a level of skill in extracting sometimes HUGE loads of spunk from my subjects.

What Does A Session Of Milking Play Typically Involve?

Prior to attending an appointment with Me, I instruct all slaves to abstain from ejaculation for a period of at least 72 hours (or even sometimes up to a week!) to ensure that their balls are fully charged ready for Me to drain.

There’s little that amuses Me more than watching a slave’s body jerk uncontrollably whilst My Venus 2000 is at full power, seeing the clear perspex receiving tube being filled with thick white fluid as his balls are literally sucked dry!

How To Ensure Safe Milking Play

Well, the Venus 2000 has to be utilised carefully, with the power and intensity being built-up gradually, as simply cranking it straight up to maximum would likely result in a less than  enjoyable experience for the slave.

High levels of suction are built-up and this, combined with skilful ‘edging’ techniques, means that when a slave is finally ‘milked’, the orgasm he experiences will be extremely intensive – even more so if I am also using electro-stimulation to his prostate at the point of ejaculation!

So, I have to be mindful of not over-stimulating a slave and causing them to pass-out before I have finished with them – although I must confess that this has happened on a couple of occasions (hence I always keep some smelling-salts handy!)

I sometimes amuse myself by wondering whether it would be possible to actually suck a slave’s balls out through his dick with My apparatus at full power?  Probably not, but it might be fun to find out!

I am Mistress Carly and as you will no doubt have realised, I am indeed a MILFstress (a Mistress you’d like to ****)  Well, I am fully aware that men find Me to be highly sexually desirable and I enjoy wielding the power My sexuality affords Me over those lucky sub’ males who are privileged enough to be allowed to serve Me.

Intrigued?  Then you have My permission to enter My world and discover a whole new world of exquisitely sensual, sexual Domination.

I am Mistress Carly and as you will no doubt have realised, I am indeed a MILFstress (a Mistress you’d like to ****) Well, I am fully aware that men find Me to be highly sexually desirable and I enjoy wielding the power My sexuality affords Me over those lucky sub’ males who are privileged enough to be allowed to serve Me. So, if you yearn to be owned by a highly skilled beautiful Dominatrix with a body worthy of your absolute adoration and a wickedly inventive mind that will delight in teasing & tormenting you to your absolute limits, then you are invited to delve further into My world of sensual Domination and devote yourself entirely to Me. I am quite different to most Dominatrix in that in addition to practicing the generally accepted activities that would be included within a Fem-Dom scenario, I actively enjoy using My slaves as My own personal sex-toys, utilising every part of their bodies for My own personal amusement & pleasure! The act of inflicting pain on a slave is something I find to be highly arousing and when I’m turned-on I want to be satisfied sexually, so I reserve the absolute right to put a slave’s tongue and/or erect penis to full use to achieve My own personal satisfaction. Intrigued? Then you have My permission to enter My world and discover a whole new world of exquisitely sensual, sexual Domination.