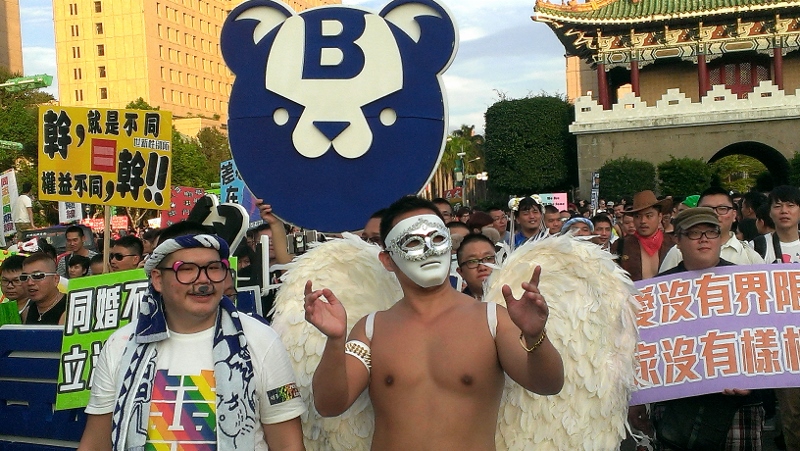 What comes to your mind when you think of gay pride parades? Topless guys with six pack abs and guys in speedo with strong torsos waving at you with a perfect smile. Over the years, public body exposure seems to have become a trademark in every gay pride parade. From promotional posters to official websites, images of guys confidently showcasing their body occupy most of the spaces. While it may not be a big deal in western countries, it has stirred some fierce debates in more conservative societies like Taiwan.

Although Taiwan Gay Pride has entered its 12th year, the general public still seems to have trouble getting used to having a massive crowd of topless guys in colorful Speedos marching through the streets. Many of them choose to bear with it because it is the once a year’s carnival occasion to them. However, every society has a group of moral defenders whose mission is to safeguard the traditional social values from the challenges posed by new cultural practices. Taiwan is no exception from that. Its group of moral fighters have been working hard to prevent Taiwanese society from falling to the invasion of foreign cultural practices.

It all started with the proposal of Taiwan’s civil partnership bill, which is aiming to grant marriage rights to LGBT couples. While this idea immediately received popular supports from Taiwan’s younger generation, a group called Taiwan Family Preservation Union decided to take up the task of preserving traditional marriages in Taiwan. They started to publicized biased beliefs about the LGBT community and Taiwan Gay Pride became one of their prime targets. The Pride’s scantily clad participants became their scapegoat. Accusing the Pride for attempting to loosen sexual morality in Taiwan by encouraging participants to publicly expose their bodies. To them, these acts of mass body exposure have reached a level of obscenity. However, the organizers of the Taiwan Gay Pride emphasize that the parade’s goal is to encourage self-expression through the showcasing personal body image. The Pride organizers that suggest conservatives rationalize the situation based on facts. A simple act of self-expression should have never been distorted into an act of intentional obscenity.

In the end, it all comes down to personal interpretation of public body exposure. For the younger generation including myself, it is the occasion that defines the act. In the case of gay pride parades, marchers expose their body parts in public to proudly celebrate LGBT culture and their queer identity. To them, it is a rare occasion where they can completely speak up about themselves without worrying about malice backlash from society rather than intentionally provoking the society at large. These LGBT individuals merely hope to attract the general public’s attention and share their ideas, culture and lifestyles with them. While conservatives may keep emphasizing the negative influence stemming from public body exposure, the LGBT community should not compromise this tradition so easily. After all, it is one of the more effective ways to get people’s attention and let them hear what we have to say. As long as the act does not go overboard, it should continue to be the widely practiced tradition in gay pride parades.