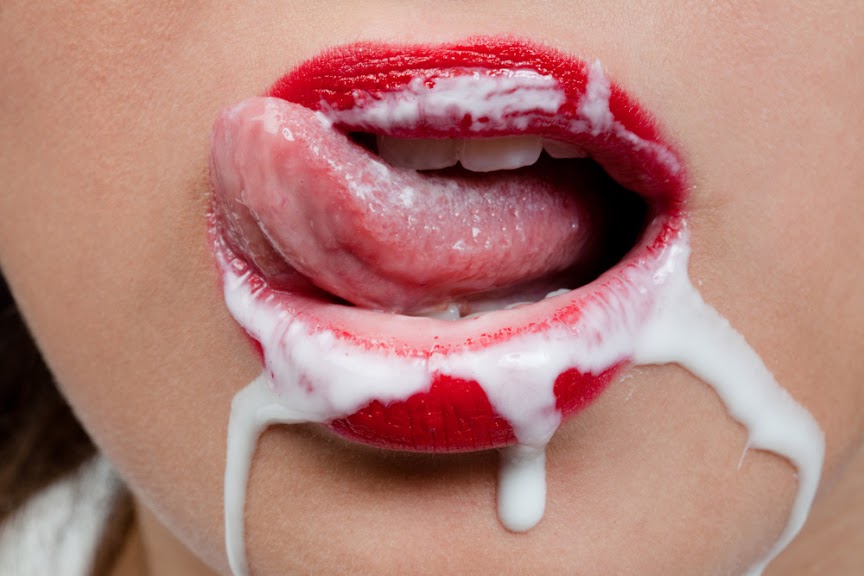 Having plucked up the courage to buy a DVD—I mean, they were just THERE, for Christ’s sake, IN PLAIN SIGHT, for everyone to purchase!—I took it back to my flat and popped it into my player. It was all pretty arousing stuff, of course, to a young man discovering some fresh illicit material, naked women, bums and breasts bouncing about, blowjobs (photographic stills were one thing, but, boy, do moving pictures bring out the most in a recorded blowie!) and then … it happened! A woman got down on her knees after a powerful bout of shagging, looked up at her male counterpart and said the words that would forever burn themselves onto the lust centers of my brain, “Come on my face!” And damn, if the guy didn’t do exactly that, and then some. He actually seemed to explode all over the woman’s seemingly joyful face. I mean it went everywhere! Thick white yoghurt-y streaks traced diagonal lines across the entirety of her face, dripping slowly between her lips and into her mouth, welling under her nose and the corner of one of her eyes … It was, without doubt, the hottest thing I had ever seen and from that moment, I was hooked. It became the thing I looked for in porn.

I began to search out the ‘facial’ and found, much to my happiness, that there was a pretty big subculture for it. And, to my surprise, I quickly found that even within the niche itself, there were things I liked and things I didn’t, that I had developed predilections for certain facials and distaste for others. For example, I enjoy the skin/semen contrast, meaning I like the jizz to be full-bodied, white and sticky, so it clings to the cheeks and actually looks like it’s there; this meant, for example, that for me a lot of the Euro-porn that was coming out of places like France and Italy at the time were out, because for some reason or other—possibly the food— the men seemed only able to ejaculate a thin, watery fluid that slid straight off and made the woman look like a messy drinker and nothing else.

But talking of my wife leads me to the next part of the facial journey and the one I get the biggest joy from. Eventually, as happens, what once existed only in the realm of the pornographic entered reality; the time came to ask an actual lover if coming on a face was something that could happen for real. It’s a hell of a thing to ask, the first time, because, there’s something so deliciously dirty about coming on someone’s face, something so illicit, it’s hard to know what the reaction will be. A slap on your own face, perhaps, followed by the slamming of a door? A look of utter revulsion or downright suspicion maybe?

Well, I guess I got lucky. The first girl I ever asked, hardly daring to hope, while fully expecting a black eye, was a bemused smile that quickly became a lascivious grin. The look became even more bemused when I asked if she would actually say the words—the words are really important to me— “Come on my face.” She shook her head, as if amused by the precociousness of a naughty child, and then took me by the hand to the bedroom, where she proceeded to take me in her mouth. The anticipation of what I knew was about to happen was almost so much I came right there and then, but I managed to hold back and enjoy the blowjob. Eventually, my partner felt my growing excitement, the tension in my body, and began saying the words, “Come on my face… please… please come on my face.” To be honest, the “please”—which I wasn’t expecting—almost killed me, but not quite, and it was with utter, joyful abandon that I emptied by balls over that grinning face … and in doing so putting my feet on a path I would never want to leave.

Knowing that it can actually happen doesn’t make it any less difficult to broach the subject with new partners, but for the most part I have been fortunate and have found myself in happy, open-minded relationships where I am able to ask for these things. I am especially fortunate that my wife loves to oblige me in what she considers to be my only sexual oddity (she shares my love for role play and dressing up, so that doesn’t count), and the sly pleasure she gets from how, even now, I can still feel quite shy about wanting to do it. For my own part I prefer to save the facial for certain moments. Coming on my partner’s face all the time would take the pleasure out of it, would make it mundane—and I want to always feel the thrill when, in the heat of the moment, I can whisper in my wife’s ear, “Say the words,” and she will squeeze me tight and whisper into mine, “Please…” and the world around me begins to glow. It is, in essence, a moment of connection for us, a moment of trust, where my, let’s say, weirder proclivities are embraced and accepted, and that is something deeply special.

There are those who think it’s nasty. Coming on your partner’s face is demeaning to her and to women in general, they think. But, here’s the thing; even though I will admit that, yes, there is a certain amount of ‘dominance play’ in coming on your partner’s face—after all, they have to kneel down for it, which in no uncertain terms adds a further frisson of illicit pleasure—the fact of the matter is, that whenever a man goes down on a woman, if your face doesn’t come up from between her legs absolutely soaking in her juices, then you’re doing it wrong. Cunnilingus, if you know what you’re about, basically means having a woman come all over your face. So, to some extent, we could call fair’s fair. But who wants to make it about that? Coming on my partner’s face is my own personal playful perversion—I don’t care how many other people in the world are into it—it is part of who I am, and she accepts it, as I accept the things that she likes that make her who she is.

And now I really need to go and hear those words …

Handicapable People Have Sex Too!
One Night Stand Etiquettes
Advertisement