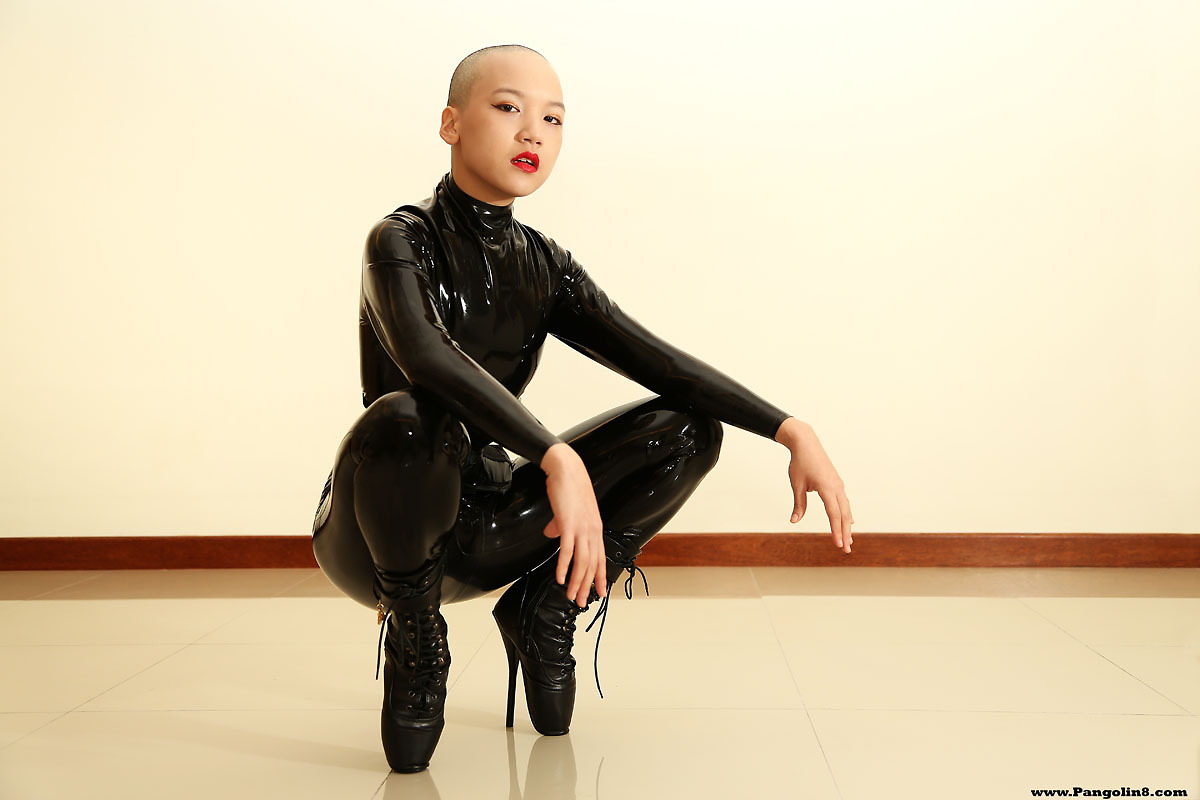 KathTea Katastrophy is a cosplay, fetish and corsetry model from Malaysia.  With her expertise as her corsetiere, KathTea creates numerous amazing custom made corsets and designs which look out of this world.  Read on to find out more about KathTea as she talks to SimplySxy on her interests and misconceptions about cosplay and fetish modelling.

SimplySxy: Hi KathTea it’s a great pleasure to interview you on SimplySxy. Please tell us a little about yourself and where you’re from.

KathTea: I go by KathTea Katastrophy but most people know me as KathTea. I am a full-time model as well as the corsetiere for Katastrophy Korsets. Born and bred in Melaka, Malaysia. 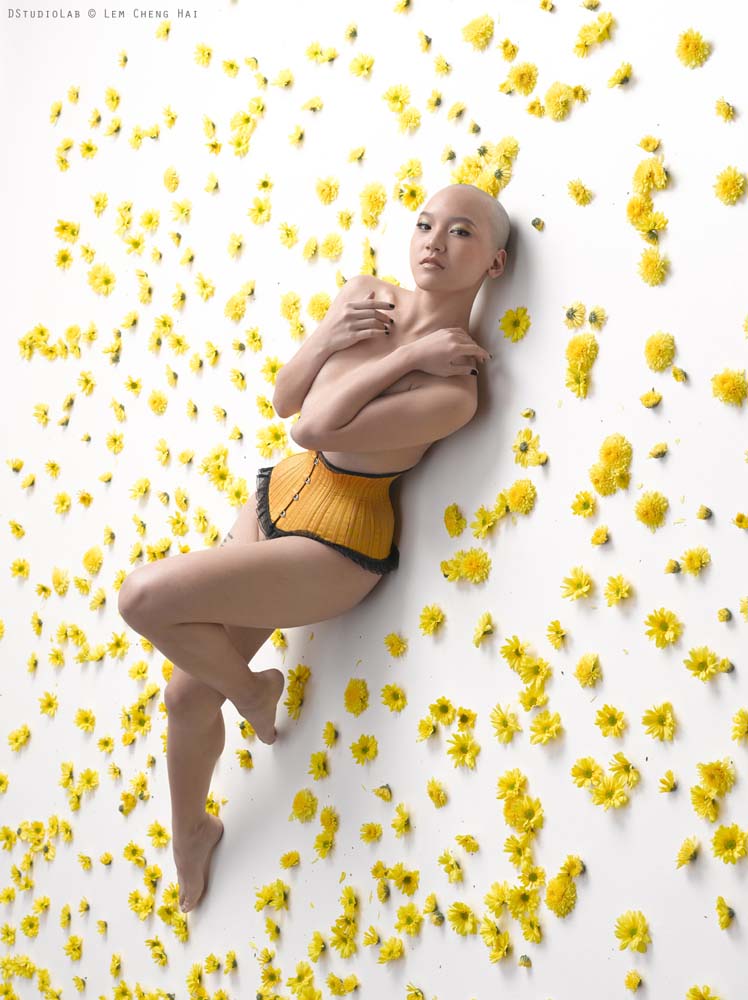 SimplySxy: How did your interest in fetish, cosplay and corsetry modelling begin?

KathTea: I’m only 5’2” (157cm) with a natural 28” waist, by mainstream modelling standards, I’m considered too short and fat, absurd, isn’t it? Even in Asia, the minimum height is 5’5” (165cm)! I had posted in model forums online, the only “advice” I was given is “you’re too short, you cannot model” which was incredibly disheartening.

When I was 16, I discovered a popular alternative softcore site on a TV show and was determined to become an alternative model. Soon, I started reading up on alt modelling and learned of Roswell Ivory. She told me not all alt models are heavily pierced and tattooed. A few years later, I started modelling while I was still a journalism intern and soon heard of another model named Anita De Bauch. She’s been my mentor ever since!

Both Roswell and Anita were (and still are) well-known fetish and art nude models. They were my initial inspirations and introduction in fetish modelling.

However, I personally found that a large majority of Malaysian photographers don’t seem to have as much of an interest in latexwear and I found it quite impractical to invest in them as I had little use for them on the daily. Around the same time, I read about how genuine corsetry can shape your waistline semi-permanently. So instead of being a heavily modded latex-clad alt model, I chose corsetry as a focus and I feel that it has since quite paid off. Lastly, cosplay is still relatively new to me, I had always wanted to try it but I never had the funds. Cosplay Deviants really opened the opportunity for me with their reimbursement program. I’ve only been seriously cosplaying almost 2 years ago now. 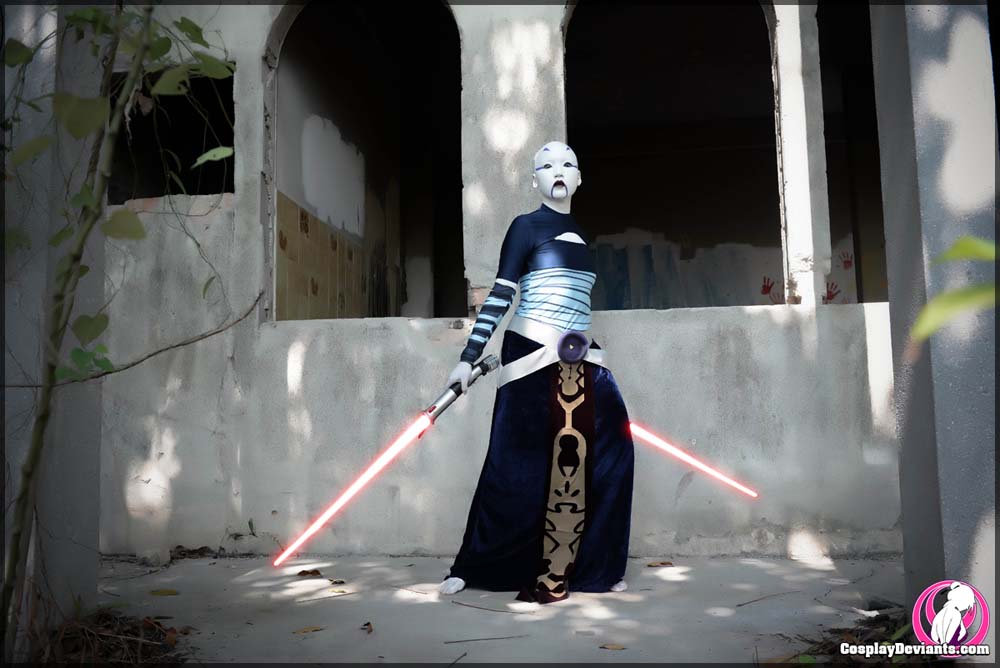 SimplySxy: There is a very strong interest in cosplay Asia with many events held in various cities around the region. How often do you participate and which are your favourite characters you like to go as?

KathTea: I admit, I am more of a cosplay model than a competitive or event cosplayer. Not that the latter is bad but early on I had some sour experiences with the clique behaviour among some in the community. Without naming names, I was in a Malaysian Lolita group online and WOW, they were extremely snobbish, snooty and brand-obsessed. As a result, I was never really close with the Malaysian cosplay community.

I’ve always gone to Comic Fiesta with my sister (DragonReine Art) just as a hobbyist. I cosplayed Deadpool in 2013 and Alice Lidell Late But Lucky in 2014 (Day 1), it’s a shame neither of these two were recognized and as a result were largely ignored. The only times I didn’t get ignored were in 2012 and 2014 (Day 2) as Bettie Page and Misa Amane respectively.

This year, things will be a bit different. From mutual friend to mutual friend, I got to know some much nicer cosplayers in the community and for the first time ever, I will be going to Nijikai! It’s a yaoi/yuri con so this will be quite a change compared to Comic Fiesta.

SimplySxy: You have your own corset line called Katastrophy Korsets. Where do you get your inspiration from to create such intricate and beautiful designs?

KathTea: Actually, a majority of the corsets you see displayed were custom made-to-order to my clients’ specifications. I guess I am lucky that a my clients and I have equally kooky and quirky tastes as myself. This year I am launching my ready-to-wear line and would finally be able to show off some samples I have been planning to make in a while. If there’s anything I’d like to claim as a trademark or specialty, it’s my use of fabric dyes and bent flat steels. 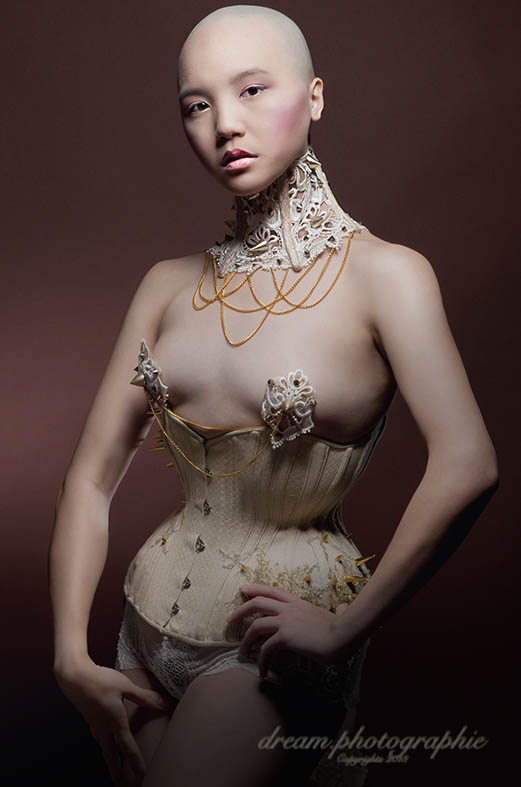 SimplySxy: What are some corsets you can recommend for those interested to tight lace?

KathTea: My ready-to-wear waspies and waist cinchers are the most affordable corsets in my collection. They’re cut pretty low under the bust and higher at the hip, thus, would suit beginners who want a little more room for movement. Those who require a bit of lower tummy control with flexibility of the previous two, they can opt for the longline cincher instead. Intermediate corset wearers can go for either the high hip, basic or longline underbusts, all 3 styles come right under the bust. The high hip allows for less restriction in the lower body while the longline has a fuller coverage, tummy and all. The basic underbust is the midpoint between these two styles.

The materials I use in my corsetry include steel boning and a cotton drill or coutil strength layer.

People interested in tight lacing should be very wary of unscrupulous brands claiming to be corsets. Most of the time those that cost under $45 are bustiers, basques or fajas, all of which are made of weak materials and plastic bones. There are also some “budget brands” that may use steel bones and cotton drill but have little to no shape whatsover. There are many more others that use either stolen designs or patterning (shaping) belonging to other brands or independent businesses.

Tightlacing is something I find that it’s very crucial to do as much research as you can on the subject as possible. You wouldn’t stretch your lobes with acrylic nor get a tattoo from a scratcher, so why should you waste your money on corset without knowing their background beforehand?

I highly suggest those interested to visit the following websites.
http://lucycorsetry.com

SimplySxy: How will you describe your fashion style?

KathTea: I’d like to say it’s “No Hair, Don’t Care” because I am actually incredibly low maintenance. I am also androgynous, which is funny because people think I “identify” as andro but that’s not it, I AM androgynous and I can’t really change that. I like to wear camouflage, leopard print, yellow and gold. But most of the time I wear whatever is comfortable and available. I have a small collection of genuine vintage dresses from VintageBiriBiri as well as some comfy leggings from various brands. Sometimes I go out in a tee and cargo pants, then get mistaken as a guy! Oh and I almost always wear this beret that I’ve owned since I was 13. That way, I stop freaking people out with my fabulously bald head. 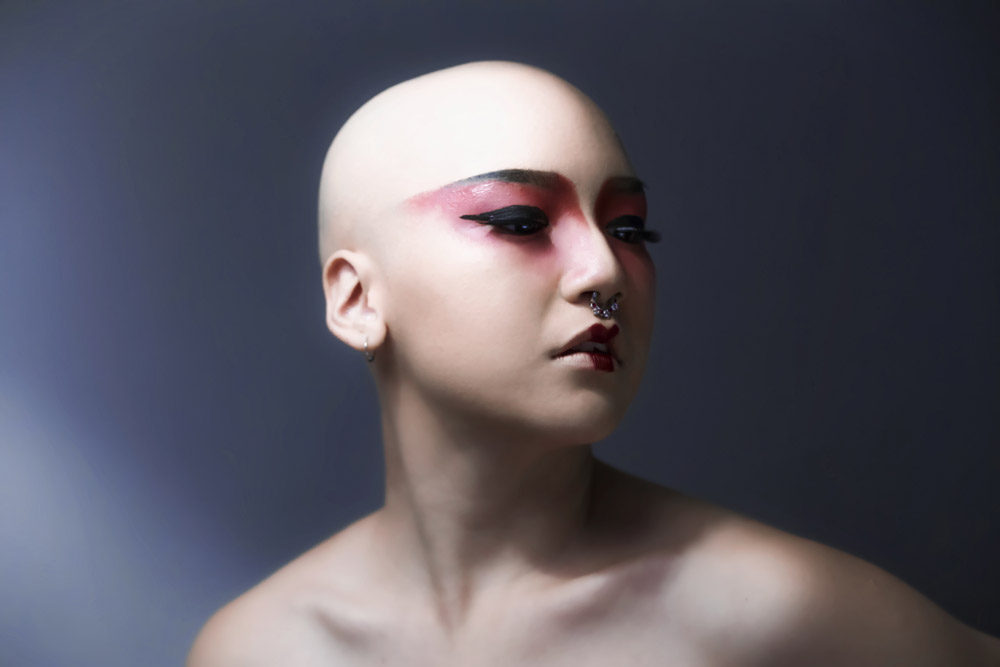 SimplySxy: What are some of the common misconceptions people have about fetish and cosplay modelling?

As for Cosplay modelling, I guess some people think I am rich when in reality the site I work for reimburses me. Another issue is the snooty bunch who believes “you’re only cosplaying if you make your own cosplay”. I believe ANYONE can cosplay, you don’t need to craft your own things to have fun with dress-up! Some people take it way too seriously.

KathTea: I collect troll messages to post on my wall. I have a 5.5mm (3 gauge) septum. And I am an aspiring faux drag queen.

SimplySxy: Thank you for the interview KathTea. One last question, how do you define “sexy”?

KathTea: Sexy is whatever you want it to be. 😉 You can have implants or a small chest, you can be tall or short, tattooed or not, you’re sexy if you say you are.

MelRose is one outrageously hot babe
Babe of the day: Hannah Lee
Advertisement