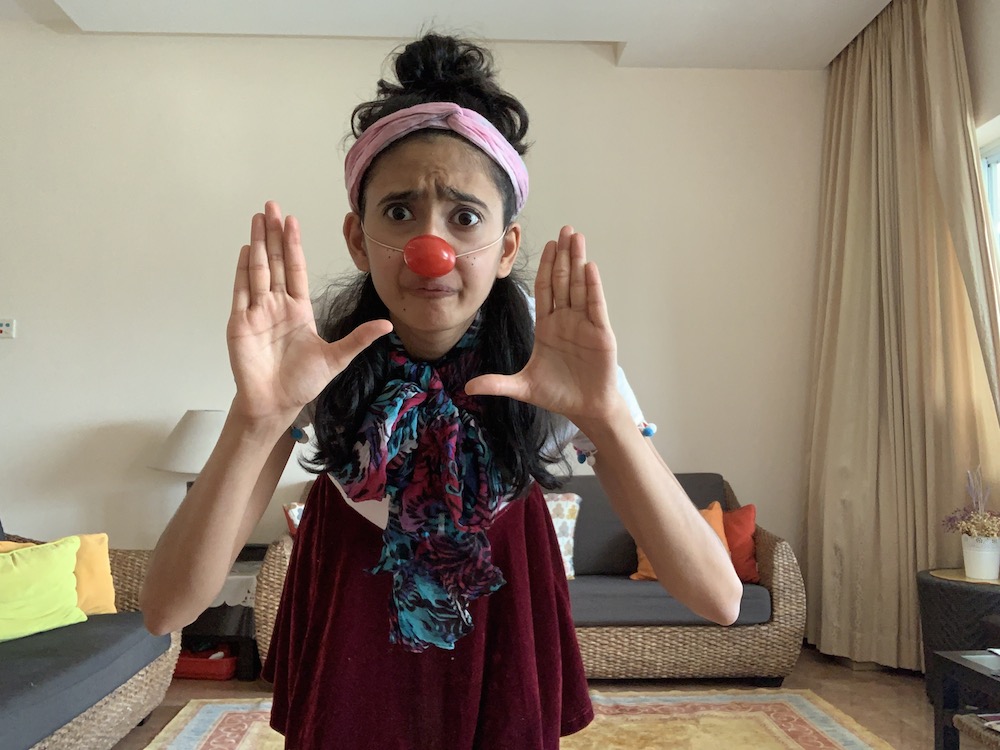 I’m a Singaporean based multi-disciplinary performing artist with a focus on dance, theatre and clown. I started in the live theatre industry in Singapore but have since gone on to bring my work internationally and to the genre of film. When I am not performing. I like to take on other creative roles such as directing, producing and arts education. I also have my own creative arts company, Creatives Inspirit where I bring arts to communities that experience illness, disabilities and poverty.

Was being a performer something you’ve always wanted to be since you were a child?

Yes! I didn’t realize it then but now when I look back, as a young child, I used to dance along to songs, play make believe with my toys and my friends from the playground. I was always finding a reason to act and dance. I remember family gatherings  where my aunties would always ask my cousins and I what we wanted to be when we grew up. They all would answer ‘I want to be a doctor’ and I would lie and say the same thing because I felt the pressure to say the right thing but in my head I was always saying to myself, ‘I’m going to be an actress!’.

What has been a memorable acting or modeling or performance you have had before that is unforgettable?

In 2016, I had the opportunity to work for a dance creation center called La Caldera in Barcelona. I remember taking a class with a renowned choreographer and director, Alberto Velasco. I was just an intern then for the company, trying to learn as much as I can by taking classes. He had seen me in the class and asked my boss if I could join his show for a large international festival, El Festival Del Grec.

I was extremely honored to be randomly talent spotted and to do the show. I was the only Singaporean in an amazing company of mainly Spanish based dancers and actors. It was a big learning curve for me because it was a fully Spanish show so I had to step up my Spanish language game for the show. Alberto Velasco was such a phenomenal director and the show itself was innovative.

The show was a dance theatre show built on the idea of a competition so as the performers we all were competing every night of the show. This experience was memorable because I won two nights out of three of the festival run and I felt quite on top of the world doing that show!

A renowned choreographer from LA, Brinn Nicole, she’s one of my teachers, she once looked at me over ZOOM and said to me (along the lines of, not verbatim)

What inspired you to start your company Creatives Inspirit and can you share more about what you do?

The inspiration behind Creatives Inspirit came from my final year capstone project in my university, ‘The Drunken Butterfly’.  ‘The Drunken Butterfly’ was a clown and dance theatre performance that was created to enable audiences to better understand the struggles of illness and caregiving. Creating that work was inspired by many stories of students on my campus who were dealing with similar experiences. The performance was a hit and it was restaged a second time in Singapore. That experience made me and a few of my collaborators realize we wanted to use art to help communities in need and so we came together and Creatives Inspirit was birthed.

Over the past five years, Creatives Inspirit has created many impactful projects, such as the ‘AnyBody Can Dance’, ‘Play through Movement’, the ‘Why Should I Care’ programme series and many more. These are inclusive programmes for diverse communities including those who experience illness, caregiving or disabilities. In these programs, we use various artistic mediums like dance, theatre, visual arts and clown as tools of respite and empowerment to individuals from all walks of life.

Before I started Creatives Inspirit, I ran a dance program in Cambodia for many years where I brought dance and Zumba to poverty ridden communities and taught a special program to help youths use dance as a way of empowerment for artistic expression and learn the tools they need to potentially build their own artistic career. I’ve always been interested in bringing and sharing the arts with people who have no access to them and I’m glad I get to continue to do that through Creatives Inspirit.

Which are your favorite quotes or mottos you like to use for inspiration?

Everything is always working out for you, best case scenario.

It helps me through the bad days for sure.

I would love to learn where my ancestors come from. I literally can’t trace back my lineage very far because of various things in my family like world war two and adoptions. I would really love to know if there were artists like me in my lineage or personalities like mine. I come from a mixed race family and I have always been curious about the people in my ancestral history.

Do you have any exciting projects lined up for 2022?

I am currently in Canada right now getting ready to perform my first solo comedy show. I’m one of the featured acts in an international artists festival in Calgary and being the only Singaporean act in this lineup has been very exciting! This project definitely has been a milestone in my performing career!

Thank you for taking the time to answer our questions Shanice. One question before we end, how do you define “sexy”?

Sexy is you not being afraid to clown around and be your true self even if that means your favourite song plays in the mall and you aren’t too shy and dance it out!

Upcoming Works: My Canadian premiere of my comedy show: https://cadyyc.com/show-item/mail-ordered/