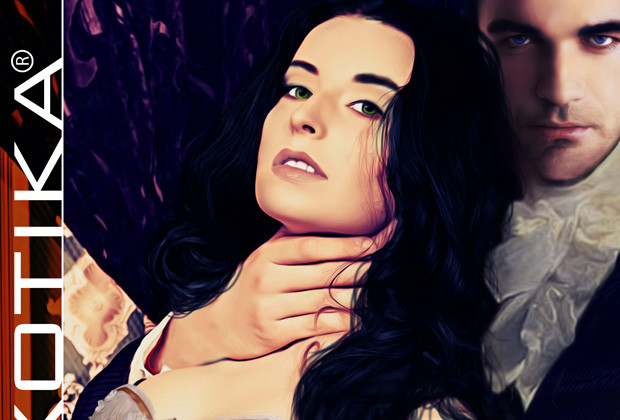 Eve was still bathing when he came for her. A man whose presence she’d frequently felt. A stranger she’d often seen riding past this cottage, his steed magnificent, a sorrel with a startling white mane and tail.

At those times, she’d noted the man’s well-defined features, noble bearing, the way his attention had focused on her alone. How his gaze had lingered and possessed, warming her skin, calling to everything female within her, demanding her submission. She’d given it, not moving, scarcely drawing a breath, her work forgotten.

Nothing except him had mattered.

Not once had he spoken or made a demand. During his increasingly prolonged observations of her he’d been content—or obliged—to do no more than look.

Now she saw the rope he held in one gloved hand. 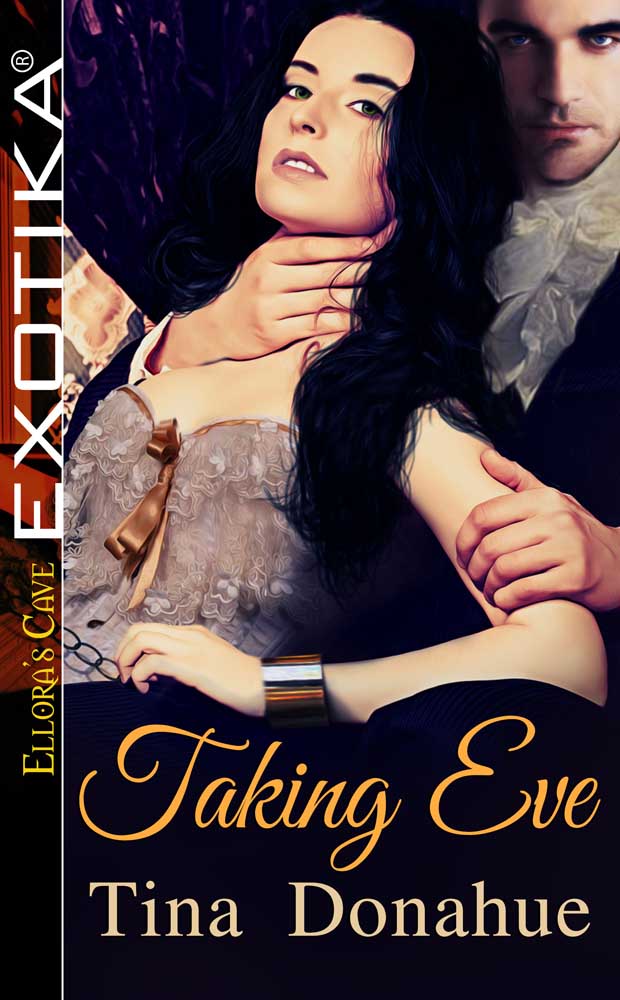 The ends of the rope jumped as he moved past the doorway, his height requiring him to stoop to avoid striking his head. He wore no top hat. Snow dusted his dark hair and shoulders. His ankle-length cloak was of fine black wool, lined with fur, his eveningwear consisted of a dark coat cinched at the waist and trousers of the same color. Fresh milk couldn’t compete with the flawless white of his vest and cravat, tied perfectly about his throat.

He closed the door, bolting it against interruption of what he was about to do.

The thought of it—and the metal’s sharp clack—caused Eve to start. Her pulse pounded fiercely. The candles Mrs. Trumble had lit stopped flickering at the wind’s departure. A few stray snowflakes floated in the air.

Eve felt none of the chill he’d brought inside, only intense heat spreading from her chest to her belly and cunt, then to her neck. Her throat tightened, not allowing her to make any sound as he stopped just short of the tub. Close enough for her to see his lushly lashed eyes, of the purest blue, more glorious than any sky.

He regarded her naked breasts to the exclusion of every other part of her and spoke for the first time. “Pull back your arms and arch your back. Present yourself to me.”

His voice was quiet yet commanding, smooth yet rough with arousal.

Unsteady with desire Eve did as he wanted. She had no other choice. She wanted none. With her back arched and her arms drawn back she lifted her breasts in offering.

He studied the ripe globes and her tightened nipples at a leisurely pace, moving from one side of the tub to the other to get his fill.

Eve remained a silent, obedient witness to his brazen perusal. Craving and enjoying it, desire pulsing through her.

A small smile touched his lips as her breasts quivered with her quick breaths. At length his attention moved lower, to the part of her the bath continued to hide. Its violet-scented water reflected the candles’ flames, which tinted it gold and orange. Warm colors that hardly matched the heat blazing within Eve.

“You know what to expect?” he asked.

Eve thought not, so she shook her head.

He seemed pleased by that and began, “From this moment forward you’re never to cover yourself in any of your Masters’ presences. Your breasts, nipples, mouth, cunt, ass and anus are ours to use as we please. Whatever we require of you, no matter how demanding or indecent, you’re to obey with the greatest haste. You belong to us now. We have your agreement. Did you make it willingly?”

Eve had. Just a few days ago she’d signed the document. Years before, Mrs. Trumble had taught her to read and write, educating and training Eve for her future Masters.

He regarded her solemnly, then glanced over his shoulder at a noise that came from behind him.

“What’s past that wall?” he asked.

Another luxury in a cottage filled with such items. There were numerous wax candles that continued to burn, the iron stove and a large cheval glass that stood just to the side of the tub, showing Eve’s reflection within it.

He removed his gloves, then his cloak, hanging it on a wall peg where nothing had ever been during Mrs. Trumble’s baths. It would have blocked the small hole her husband used to watch her.

“Being observed during one’s private moments is quite exciting,” Mrs. Trumble had said, then tittered and blushed. “Brings me back to my time in the House of Lords.”

Tonight Mrs. Trumble had wanted to keep the hole open so she could watch what happened between Eve and her Master. A nobleman who was surely no more than five-and-twenty had made certain he was now alone with her.

He moved in front of the mirror and slung the rope over one of the ceiling’s beams. As the ends dangled loose, presenting a picture that was both inviting and menacing, he said, “Leave the tub. Stand in front of me.”

Murmurs came from the Trumbles’ chamber. Whether from Mrs. Trumble or her husband, Eve couldn’t be certain. Eager and anxious she pushed to her feet too quickly. Water flowed over the lip of the tub, the drops making faint plunking sounds as they hit the floor.

Being nude, defenseless and watched so closely heightened Eve’s senses. She was all too aware of the wind whistling past the cottage, rattling the door. The iron stove pinging with heat. The slap of her bare feet as she went to her Master, just as he’d demanded.

He towered over her, the top of Eve’s head barely reaching his shoulder. They were so close she caught his fragrance. The scent of snow, sandalwood, tobacco and leather. Male and intoxicating.

Her heart beat out of time.

He studied her with a right he’d been born with, one she’d given him by signing away her freedom. Willingly. Wantonly. As he regarded her nudity water dripped from Eve’s hair to her breasts, the beads rolling to her nipples where they lingered for a moment before falling away. Some of the moisture streamed down her belly, becoming trapped in the dark curls between her legs. There his attention remained for so long a small puddle formed at Eve’s feet. Her body continued to soften at his gaze raking over and owning her. A pulse beat deep within her sheath.

She waited for him to touch her.

He stepped back. “Hold out your hands. Press your wrists together.”

Eve’s throat went dry with anticipation. She forced down a swallow as he deftly tied her wrists with one end of the rope then pulled the other over the beam. Her arms were soon above her head. Her body fully vulnerable to his gaze and touch.

She suppressed a whimper of delight and spoke without thinking, “Will you take me now?” Would he whip her?

He regarded her with unexpected tenderness that he pushed aside with a quiet huff.

“You mustn’t speak,” he warned, low enough so only she could hear. “You won’t say another word until I allow it, nor make even one sound. Never will you reveal what takes place in the coming moments. Spread your legs.”

I’m an award-winning, bestselling novelist in erotic, paranormal, contemporary and historical romance for Kensington, Samhain Publishing, Ellora’s Cave, Siren Publishing, Booktrope, Luminosity, and indie. Yay! Booklist, Publisher’s Weekly, Romantic Times and numerous online sites have praised my work, and trust me, I’m forever grateful for that. I’ve had my books reach finals in the EPIC competition, one title was named Book of the Year at a review site, and others have won awards in RWA-sponsored contests. I’m actually featured in the 2012 Novel & Short Story Writer’s Market. Talk about feeling like a freaking star. Before my writing career, I was the editor of an award–winning Midwestern newspaper and worked in Story Direction for a Hollywood production company. Outside of being an admitted and unrepentant chocoholic, I’ve flown a single-engine plane (scary stuff), rewired an old house using an electricity for dummies book, and have been known to moan like Meg Ryan in When Harry Met Sally whenever I’m eating anything Mexican or Italian. Yeah, I like to eat (burp).