Before Lilith became Queen of the Demons, she was Eden’s first woman, eager to learn about the birds and the bees with Adam. Until one stormy night when Lilith follows a tall dark stranger into the garden and all hell breaks loose. For the first time, Lilith discovers there is a world outside paradise and sets out on a journey to find the meaning of life and love. 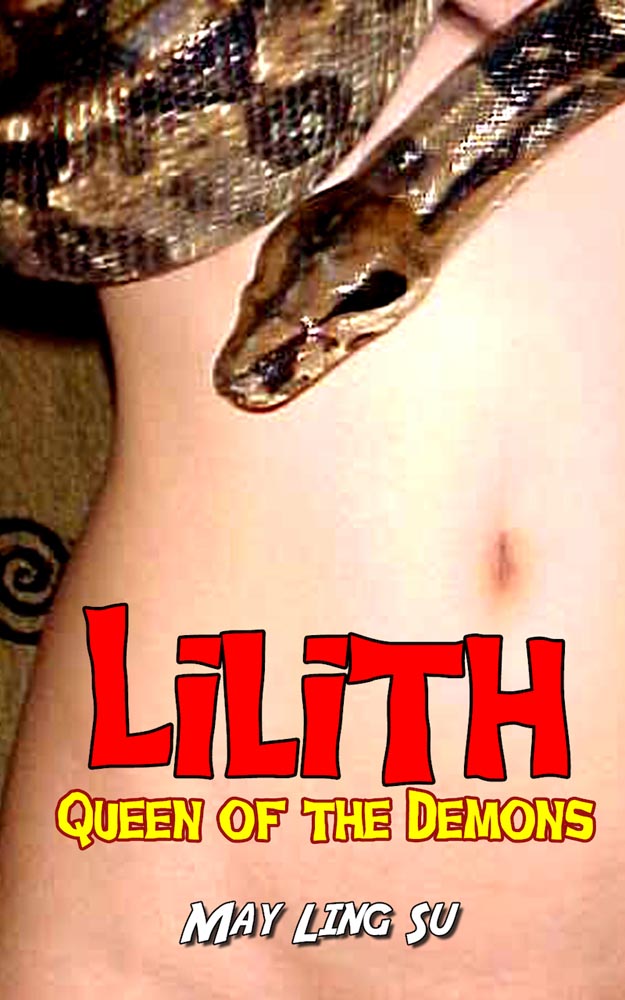 Adam lay on the ground. The sun was setting on the horizon of Eden. He felt a warm hand on his face.

“Adam, wake up,” she woke him softly.

He opened his eyes for the first time and saw her. She was beautiful. He lost himself in the depths of those golden green eyes. She leaned over him, her round, plump figure framed by locks of auburn curls that seemed to be lit on fire by the sun behind her. Her face was full of calm, concern, and love.

She caressed his body, felt the strength of his shoulders, the firmness of his abdomen. She pressed her cheek on his chest and listened to his heartbeat. The soft thump thump thump gave her such pleasure.

We’re alive! she thought to herself as she kissed his warm skin. She explored his flesh, kissing her way down his chest to his stomach. She marveled at how his torso rose and fell with every breath. She liked how his muscles flinched and tightened with each kiss. His reactions excited her.

As she kissed further down, she noticed something different about his body, something she found unlike any part of hers. She held his unusual appendage in her hand, and to her surprise, it began to swell. Larger and harder it grew. She leaned closer to examine it, this mysterious protrusion where his legs joined together.

She ran the soft tip of it across her lips, and flicked the end of it with her tongue. He tensed and relaxed each time she tickled it. She slid it into her mouth. The spongy tip felt good. He reached down and ran his fingers through her long curly hair.

As he got aroused, she felt a stirring inside her as well. Her excitement centered in the same nether region on her body. She reached between her own legs, softly stroked the small patch of fur gathered there. She found a wet sensitive spot deep inside herself. She eased a finger in, then knew what to do.

She climbed on top of Adam and rubbed his erection up and down on her wet spot. It felt good. She eased her pelvis down onto his and straddled his hips. Slowly and methodically she pushed him inside her. He arched up, alarmed and confused. She put a hand on his chest, eased him back. Her smile reassured him that all was well. She rode him with vigor. She pumped up and down, and felt the excitement and joy of flesh on flesh for the first time.

Adam felt as if the world around him trembled as he did. Behind her, green leaves on trees shivered in the breeze. Blue sky vibrated into tufts of yellows and oranges as the sun approached the furthest edge of earth he could see.

He felt a surge. He clutched at her soft hips and furiously pumped faster and faster up into her crevice. Her round breasts swayed in front of him. He reached up and clasped them in his hands.

She leaned forward and kissed his lips as he exploded a thick liquid substance into her orifice. She felt the excitement swell between them, the heat generated from his climax, and then his member slowly recede inside her. His once swollen and stiff organ became soft again, and it was over. She reached down, slipped two fingers inside herself, and felt the wetness. She already wanted more. She tasted her fingers and felt the tingle of his semen on her tongue.

“Who are you?” It was all he could say, exhausted from their activity.

She drew her fingers from her mouth and laughed. “I am Lilith.”

LILITH: QUEEN OF THE DEMONS is available on Amazon at
http://www.amazon.com/dp/B019N1TLBU

Image courtesy of May Ling Su

May Ling Su is an author and muse. Her debut novel, Lilith: Queen of the Demons, book one of a series, is available on Amazon as a kindle download, paperback, and audio book. She blogs at MayLingSu.com