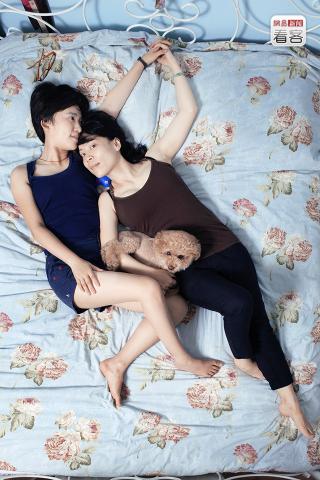 Homosexuality has been a social taboo in China for decades, and even as situations are improving elsewhere in the world, China’s homosexual community remains mostly hidden from mainstream society. However, two Chinese photographers, Masa and Mojo decide to end this decades-long silence and reveal the everyday lives of 48 gays, lesbians and their families through their lens. They spent six months and visited 11 Chinese cities to complete their documentary, “A Straight Journey: days and nights in their kingdom.” This is the first cinematic work of any kind that focuses on the lives of Chinese homosexuals.

It all started with their initial idea of shooting portraits of homosexuals in China. Their routine chats with each subject before the shoot ignited their interest in documenting the meaningful exchanges. They realized that there is still a huge gap between heterosexual and homosexual communities. Homosexuals always hope to be understood and treated equal, but very few of them have the courage to reveal their homosexual identities. This often prevents others to understand their situation fully. On the other hand, heterosexuals always think they know their homosexual peers well, but in fact, mainstream society’s understanding of homosexuality is still stereotypical. Stereotypes like “homosexuals have good sense of fashion” or “homosexuality is a disease and it should remain discreet” are all false understandings acquired from distorted media reports or subjective reasoning.

They think Chinese homosexuals have a better living environment comparing to peers in many other countries. In the United States, while public understanding and discussion about homosexuality is sufficient, there are still certain religions that are anti-homosexual and hate crimes are still quite common. However, the gap between the two sides in China remains due to the fact that most heterosexuals have never met homosexuals that are out in public. As a result, their project looked for homosexuals that were willing to be identified in front of the camera. In other words, they are using actual human faces to replace the homosexual tag that has long been used in China. Instead of forcefully educating others the right way to treat homosexuals, they simply want to present real homosexuals to the rest of society. They want to reduce the fear and refusal stemmed from the lack of understanding through the project.

To them, the advancement of Internet technology has positioned Chinese homosexuals at the crossroad of “day” and “night.”

“Situations have changed dramatically in the past five years,” said Masa and Mojo in an e-mail interview. “Some of them are still in the dark while others have chosen lives under the sun. It is a stage full of stories.”

As photographers, they hope to generate more rational discussions and attract attention for homosexuality in China. Instead of reaching consensus, they rather help Chinese people to think about this question and realize that this is a significant question. It is a very basic but important step. They think that letting the homosexual community appear positively in media is also an important influence.

However, things were not always smooth-sailing during the shooting process. They had a hard time finding suitable subjects, and they had no financial support during the six-month trip.

“We often had to sleep on different sofas,” said Masa and Mojo. “We were unable to find the best balance and we struggled to deliver the best quality shots throughout the process.”

But the result redeems all their sacrifices. The film’s achievement is beyond their imagination. They successfully shared the stories of 48 homosexuals with millions of Chinese people, but they believe the topic of homosexuality remains complicated that it will be hard to initiate deeper discussion on a larger scale.

When asked about their thoughts on gay rights movement and marriage equality in China, they expressed optimism. They think since the homosexual culture has become more vibrant and open, the younger generation can soon make history in China. Additionally, the global wave of marriage equality is also gradually influencing China’s tradition. In a way, China is adapting to a more openminded era and they believe that positive changes will occur soon.

The duo didn’t dwell on their historic achievement for too long as they have began shooting and editing their next documentary, which features one of the characters in “A Straight Journey.”

(To have a peek into Masa and Mojo’s 2015 ShanghaiPRIDE winning film, please refer to it here.)

Image courtesy of actipedia.org
Have an amazing experience or tips you like to share on SimplySxy?  Drop us an email at editorial@SimplySxy.com!