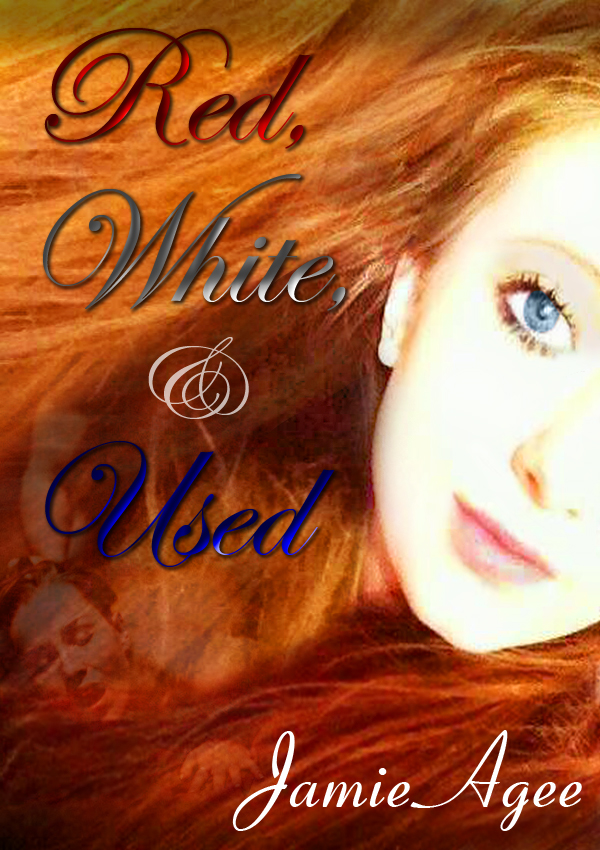 Red, White, & Used is a dark story that chronicles the life of Allison Holden, a striking redhead with a dysfunctional past. She engages in adulterous and unhealthy relationships with men who mentally and physically abuse her. Follow Allie on this non-stop ride, filled with twists and turns, as the chaos of her life unfolds.

He pushed me to the floor and I landed on my face.  I couldn’t brace myself because my hands were tied behind my back.  I was already sore, and he was only beginning.

His strong hands grabbed my right hip and shoulder and flipped me onto my back.  My arms were pinned beneath me in an awkward contortion.  I couldn’t see him.  The blindfold prevented me from seeing anything about my surroundings or what was happening to me.

I felt his weight on my shoulders.  He must have crouched down and pressed his knees into the carpet on either side of my head.  His shins pinned my shoulders to the floor.  He grabbed the hair on top of my head and yanked my head upward.  With his other hand he opened my jaw.

He had a pretty big dick; I knew that already.  And being unable to control the insertion into my mouth, it went in so deep I nearly choked.  The gagging seemed to turn him on.  He continued to brutally fuck my mouth, guiding the movement with one hand on my lower jaw and the other clinging tightly to my hair.

Just when I didn’t think I could take any more, he dropped my head back onto the floor.  I felt him lift off of me, but knew I was in for more punishment.  There was an eerie silence and lack of activity for an excruciating amount of time.  For a moment, I thought he had left me there like that.

I let out a sharp shriek when he landed on top of me again.  This time he attacked my breasts.  He yanked open my shirt and pushed my bra upwards giving him unhindered access.  He squeezed and pinched one breast while licking and sucking the other.  His mouth stayed on my nipple while his hand slid down to my skirt.  Jerking it upward, he tore it a little.  Then I felt his hand inside of my panties.  His fingers were rough against my smooth skin.  He shoved two fingers inside of me unapologetically, and massaged me from the inside.

My hands and arms ached from being pinned under the weight of both of our bodies.  He didn’t care.  My pleas and moans only served to arouse him.

With a few strong tugs, he ripped my panties off of my hips.  He didn’t bother removing all of my clothes, only what he needed to gain access to the parts of my body he wanted.  And there was nothing I could do about it.

Suddenly, I was face down again, and lint from the carpet was in my mouth.  He yanked my hips upward so that they were supported by my knees.  Then he entered me from behind.  One hand squeezed my ass while the other pressed my head against the floor.  He pushed in and out of me aggressively, and I was sure I would get rug-burn on my face.  And he was in me so goddamn deep.

No, I was not getting raped.  That’s just how I liked it – hard and rough.  I was being completely dominated, and I loved every second of it.  Being utterly helpless was such a turn on for me.  I was his toy to do with whatever he pleased.

He came inside of me, and held himself there until every drop of his fluid had drained.  He left me completely satisfied, yet still wanting more.  I relaxed onto the carpet and waited to be released from my bondage.  After a moment of quiet, I felt him untying the nylon ropes from my wrist.  Then he removed my blindfold.

I could finally see Trevor Masterson – the man who made my toes curl; the man who dominated me and brought me to the pinnacle of ecstasy.  I was crazy about him, or at least what he did for me.  However, I wasn’t sure if Masterson were his real name.  It seemed too convenient that a guy who liked to be the “master” was named Masterson.  I didn’t care if he was lying to me.  Our relationship certainly wasn’t about truth and honesty.  It was just about kinky passionate sex.

I had been seeing Trevor for about a month.  We didn’t have a slow kindling romantic relationship like a typical couple.  No, we had crazy animalistic sex the first night we met.  He had shown me pornographic pictures on his cell phone of couples engaged in bondage, domination, submission, humiliation, you name it.  It was the type of sex I had wanted to try for a long time.  And Trevor was more than happy to oblige.

We got together about once a week, or whenever I could get away.  Of course, I always had to keep our dates discreet.  I was sure my husband would not approve.

Purchase and read the rest of Red, White & Used at http://jamieagee.com/erotic-stories-red-white-used

Just a nerdy girl with a dirty mind I began writing erotic fantasy and science fiction stories in high school just for fun. I guess I've always had an active imagination and writing seemed like a great way to explore my mind and live out fantasies. I never considered myself an author and had no intention of ever getting published. I only wrote for personal enjoyment. But here I am with my darkest fantasies published on my website, Amazon, and Smashwords. It's intimidating to say the least. I hope you enjoy these stories as much as I enjoy dreaming them up. Feel free to post comments on my site or send me an email. Come visit me on Facebook and Twitter and say hi!