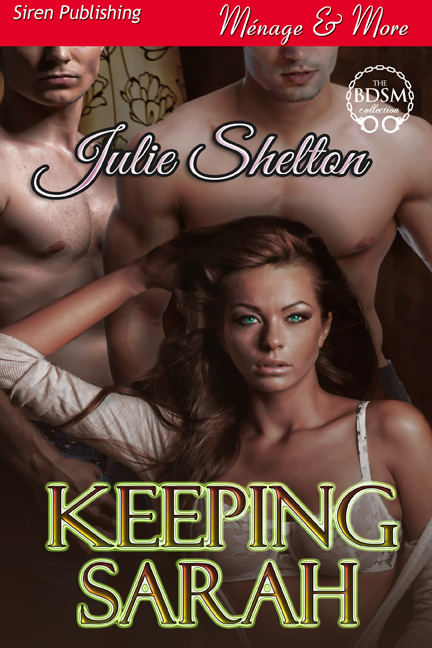 Through Thorne, they discover that they’re the targets of a “blood feud”, instigated by Konstandin Sokolov, son of Viktor Sokolov, the Albanian mobster who had unwisely kidnapped Sarah a few months back, and paid for it with his life. They also discover that Thorne’s guests, ruthless human traffickers, have gathered at the club for a slave auction being held the following night. Konstandin Sokolov happens to be one of the buyers.

Then Jesse turned to Sarah. Bending down, he put his hands beneath her arms and lifted her up off the floor. Turning her in his arms, he unhooked the garters, then unlaced the corset, letting it fall to the silk carpet. As soon as the beautiful, but restrictive garment fell away from her, Sarah took the first deep breath she’d had in hours. “Step out of your shoes, baby,” he crooned, rolling down her stockings and removing them one foot at a time. “Now bend over and grab your ankles. I owe you a spanking.”

With a whimper, she assumed the undignified position, her second of the night, wrapping her fingers around her ankles while he got on his knees behind her to remove the vibrators from her pussy and ass. Dropping the toys on top of the crumpled corset, he palmed her ass cheeks, his flexing fingers making deep indentations in her sweet flesh. “Spread your legs, baby, or you’re gonna fall over.” A smile curved his lips upward as she slid her feet outward. God, I love this ass! He slapped her sharply, the sound and her subsequent cry loud in the quiet room. “Count,” was all he said, transfixed by the erotic sight of his handprint blooming on her skin, first white, then red.

“How many have you earned tonight, slave?”

“Ten, Master.” Her voice was barely audible, muffled by her position.

“There will be no warm-up, so I’ll make them quick. Count them all.” In rapid succession, he delivered ten blistering swats to her backside and by the time she counted the last one, her ass was fiery red and she was sobbing in pain.

Crap, that hurt! And yet, it felt so good. So damn good. The heat from her ass seemed to be having an effect on her clit, as if the two were connected by wires pulsing and crackling with electricity. Her sobs turned into moans as he stroked and kneaded the heat more deeply into her flesh, sending it straight to her pussy until her clit felt like it was on fire.

Still gripping her ass cheeks, he lowered his head, slanting it sideways to flick the tip of his tongue across her throbbing little nub. She jerked and cried out as pleasure consumed her. Then he straightened, pulling her up after him, and steered her toward the bed. If Adam was in sub-space, then Sarah was right there with him, lost and drifting and needing Jesse’s loving care. It was now his duty and responsibility to love them and keep them safe and give them the pleasure they had both earned and richly deserved.

“Climb up, baby,” he said, assisting her up onto the bed. “On your hands and knees above Adam, pussy over his face, head over his cock.” As he was talking, he, too, was getting on the bed, crawling across its enormous expanse toward Adam’s feet. “Legs apart,” he ordered and Adam slid his feet across the silky sheets. “Prepare Sarah.”

At the quiet command, Sarah’s core convulsed again, sending out another gush of fresh cream. God, she was so ready to come! She had been so highly aroused for so long, now that it was finally going to happen, it was all she could focus on. Without warning, Adam reached up and stroked his fingers through her slit, from front to back before thrusting two fingers deep inside her sheath hovering so tantalizingly above his head. He pressed his thumb against her puckered anal opening, pushing insistently, until the muscle relaxed and sucked it in. Sarah stopped breathing. With wicked skill, he thrust in and out of both her anus and vagina, pinching the membrane between his thumb and fingers as he stroked, quickly re-stoking the fires of need in her sex, burning just beneath the surface. A thin, high wail escaped her lips as pleasure devoured her.

“Christ, Jess,” Adam muttered over the wet, sucking noises his fingers were making as he pumped them in and out of Sarah’s sheath, “you should see what I’m seeing. Our little slave has the most succulent pussy in the world. And it’s dripping all over the place.”

Julie Shelton’s third and final installment Keeping Sarah will be available from 7th August 2014.  Watch out for SimplySxy’s interview with Julie on the 7th to find out more about Keeping Sarah and her next erotica in the works.

Image courtesy of Julie Shelton
Join SimplySxy’s forum discussions now on Society
Do not miss another article on SimplySxy!  Follow us on Facebook and Twitter for our latest updates!