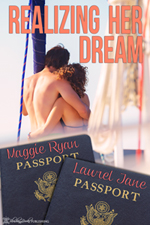 When Casey Reeves loses her husband to an unexpected heart attack, she gives herself a new mantra: To live life as if it were an amazing adventure, as every single day matters.

Unfortunately, one of the things on her bucket list looks far better on paper, and when Casey finds herself up in a plane, strapped to a tall, handsome man, about to undertake her very first parachute jump, she realizes that she’d do just about anything to be able to back out.

Paul Jackson has been a parachute instructor ever since he retired early, and has seen his fair share of terrified women, but when Casey hysterically promises to do anything he asks in return for being able to return to solid ground safely—even let him spank her—he’s amused, and not a little intrigued. He’s also more than willing to accept her bargain.

Casey finds herself taking a leap of faith—in more ways than one. The two begin their journey together, spending some time on a luxurious yacht, in a tropical rainforest and even in a ranch in outback Australia, as they work their way through her list.

What they discover is that life has a tendency not to follow carefully designed plans. With Paul beside her, Casey quickly learns that living every day to its fullest entails far more than she’d ever imagined. And by her side throughout the action, danger and laughter is a man who not only has no hesitation in reddening her bottom when she deserves it, but can send her soaring into ecstasy with a single look or a touch of his hand.

Finding a new love to equal—or even exceed—her old one was not even on Casey’s bucket list but now that she has, can they make it work? Is Paul really the man of her dreams?

Best-selling author Maggie Ryan and newcomer Laurel Jane have put their heads and their pens together to come up with this, an exciting tale of romance, lust, love, spanking and adventure. If the subject of domestic discipline or explicit erotica offends you, please do not read this book.

“Put your hands above your head,” Paul ordered, his words causing his warm breath to waft over her sensitive flesh. “Keep them there. I wish to feast on my dessert without your interference.” Once her hands were clasping the railing of the headboard, he lowered his mouth to her sex, his tongue nudging her outer lips open until he was able to press between the delicate pink petals of her inner lips to sink into her heat. He was rewarded with a gush of her cream, which he slowly and languidly lapped up.

“Delicious,” he said as he smacked his lips, his eyes finding hers. “You taste like honey.” She quivered in his hands as he lowered his mouth again to suckle, nip and then bite at her skin until she was pressing her hips up, begging for more.

“Come for me, Casey. I want you to fill my mouth with your sweet cream.” His words ended as he drew her clit into his mouth, pressing the throbbing bud against the roof of his mouth as his tongue lashed it and two thick fingers drove into her pussy. Within a few strokes, she was tensing, her muscles clenched in preparation of exploding. When he bit down hard, he drove her over the cliff and her hands flew off the rails to hold his head to her as she convulsed again and again, his tongue and teeth never letting go until she was attempting to push his head away.

“Naughty,” he said after finally releasing her clit. He moved to sit back on his heels and pulled her legs back together before pushing them up to expose her bottom. The diaper position gave him absolute control as he held her ankles in one hand, and used the other to spank the taut skin of her upper thighs before moving to the plump globes of her ass. His hand was hard as he swatted her bottom until she was bucking for another reason.

Purchase and read the rest of Realizing Her Dream at Blushing Books, Amazon and Barnes & Noble.

You may also like...
Related Topics:Excerpt, Laurel Jane, Maggie Ryan, Realizing Her Dream

Author for Blushing Books. I write both contemporary erotica and historical spanking romances. I enjoy writing about characters that enjoy the provocative D/S lifestyle of today’s times as well as taking a step back into the past to write stories that take place in the Victorian era with age-play as a theme.