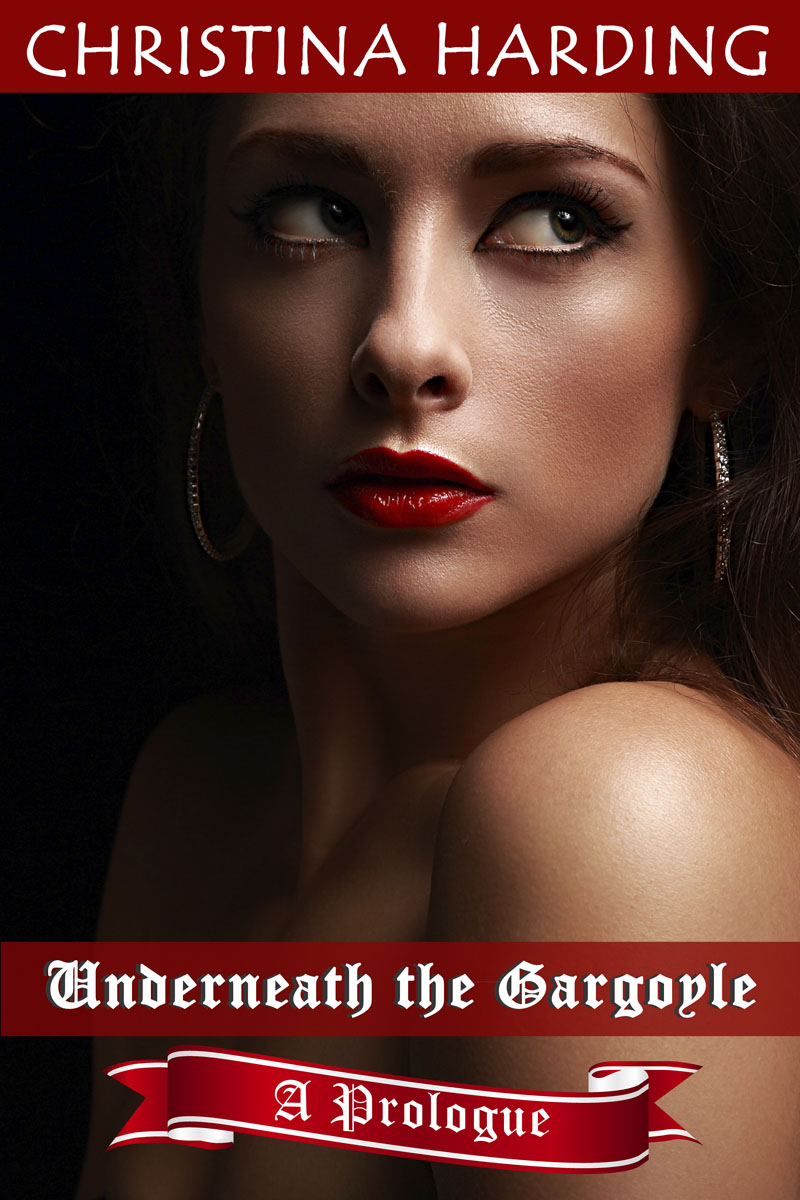 Underneath the Gargoyle: A Prologue

What really happened between Kyle’s parents? A PROLOGUE explores the kinky back story which occurs about 18 years prior to the beginning of Christina Harding’s UNDERNEATH THE GARGOYLE series.

Marissa stares up at the gargoyles at the top of the church and frowns. She fumbles with her polaroid camera, frames one of the gargoyles in the viewfinder using the zoom function to get a close-up, and snaps a picture, her fingers going numb in the frigid cold air. I wish I had my textbook on gothic churches with me, Marissa thinks as she stands in front of the church, waving the polaroid and waiting for it to develop. Her eyes widen with excitement as she remembers she did, in fact, bring the text.

Still waiting for the photo to develop, Marissa sits down on the steps of the church, despite the fact that they have iced over, and flips through the pages until she finds what she’s looking for. There is an entire chapter devoted to this church with detailed photographs of its features, including the gargoyles. She finds a photo of her gargoyle, the one who looks like a dragon. He is sitting in a crouching position, as usual, and he is baring his teeth as if he’s about to exhale a ferocious flame of fire.

The polaroid of this same gargoyle is starting to come into focus, but his teeth aren’t bared. He’s crouching, but he’s staring almost peacefully off into the distance. Her heart racing, Marissa slips the photo into the text as a bookmark, and stands up to get another look at the gargoyle.

His teeth are bared again like in the textbook, but not like the polaroid she took just moments ago. What the heck? Marissa thinks. Trembling, she looks down at her polaroid again. How could this be possible? The gargoyle must have moved while I was flipping through my textbook! she thinks. She takes another photo of the dragon-like gargoyle, now baring his teeth, and then sets off, hustling to the university with a skip in her step.

“Professor John!” Marissa calls out to her thesis advisor, knocking on the door to his office. He opens the door.

“Marissa!” he says, sounding surprised. “Come on in!” he opens the door wide, and Marissa slips through. His office is warm and welcoming with a fire sparkling in the fireplace.

“I have found some solid evidence to support my theory of cryptozoology.” she announces, excited and still breathless from running.

Professor John closes the door to his office and sits down at his desk, waving for her to sit down too. “What have you found?” He sounds eager.

“The gargoyle on top of the church,” she pulls out her two photographs, “I caught him moving today.” Marissa hands her photos to the Professor.

He adjusts his reading glasses and gives the polaroids a long look. “When did you take these pictures?”

“Maybe fifteen minutes ago. I came straight here. I took the photos only about a minute or two apart,” Marissa rushes to explain.

“You realize the implications of this are huge?” Professor John says, placing the pictures on his desk. “This could be a major breakthrough in the study of cryptozoology.” Marissa’s heart swells with excitement, but the professor continues, “You know, not everyone is going to believe the authenticity of these photos. To date, every picture of a cryptid has been debunked. How are you going to prove that your photos are genuine and that they were taken only within minutes of each other? Who’s to say they weren’t taken years apart and that the gargoyle was not modified?”

Marissa finds herself flushing; she was not expecting such a skeptical reaction. Stammering for a response, she asks, “Do you believe me?”

“I think, a girl such as yourself, should not sully her hands in such matters.”

Noticing her vulnerability, Professor John continues, “It must have been hard to get here so quickly.” He looks pointedly at Marissa’s stretching belly. “When are you due?”

“As it seems, a child out of wedlock will cast shadow on your moral integrity. You are going to need someone to support your claim, someone with credibility.”

“As my thesis advisor, can’t you…?” Marissa begins to ask.

“Oh yes, that would seem like the obvious choice, wouldn’t it?” Rising from his seat, Professor John rounds his desk and approaches Marissa, “That would require extra effort on my part. And so, I would expect extra from you in return.”

Hoping she’s hearing him correctly, Marissa eagerly responds, “Oh thank you, Professor! I would be happy to do whatever it takes!”

Professor John reaches up and brushes the hair on the side of her cheek. “I was hoping you would say that.” His hand traces down her neck and starts circling her breast.

Marissa tries to back up, but has nowhere to go. She tries to protest, “I love Matthew Cohen.”

“Even though he won’t marry you? He has left you for any man to take.” Professor John reaches up with his other hand and starts caressing both of her breasts.

“Matthew’s status with the church requires certain obligations.” Marissa futilely explains. She tries to squirm away from the Professor.

“None of this. Lay down on my desk now,” the Professor commands.

“No, and get your hands off me!” Marissa insists. She stands up and attempts to brush by the Professor, but he blocks her way.

“If you’re not going to play nicely, I can just get rid of your evidence,” the professor says, grabbing the polaroids off of his desk and holding them over the fire.

“I knew you would come around.” Much to her surprise, the Professor grabs the elastic waist band of her maternity clothes and pulls them down exposing her to the office. Marissa tries to clench her legs together in a last attempt for modesty, but even as she does so, she feels her pussy start to tingle with expectancy.

The Professor pries her legs open and props them on his shoulders, one on each. Marissa feels the heat of the fire directly on her most private space as it starts to drip. Out of obligation, Marissa cries out, “Please don’t. I love Matthew!” even though her body is yearning for more.

Ignoring her pleas, the Professor zips down his fly and pulls out his swollen cock through the front of his boxers. Even though the skin around his potbelly is loose with middle age, his rod is still firm and hard, ready to enter this flesh which is thirty years younger than himself. Professor John caresses Marissa’s youthful labia with the head of his dick, following the folds around her cunt. Marissa tingles as a rush of blood to her pussy makes her fully engorged. She moans.

The professor is still fully dressed in his suit, his pants hiked up around his waist. Just his pink, swollen dick is unveiled, poking out of his boxers from a mass of curly pubic hair. Meanwhile, Marissa is completely exposed from the waist down, and her shirt is starting to ride up over her swollen belly.

Smearing his pre-cum across her labia, the Professor observes, “I wonder how much you really love him. You seem to be enjoying yourself quite a bit.” He poises the tip of his cock right at the opening of her throbbing hole, entering her with just the head, wavering on the brink of her crevice.

“Oh please…” Marissa starts whimpering. But as she says it, she realizes she’s not asking him to stop, but actually begging for more.

“Now tell me, what are you planning on naming your child?”

Marissa tries to focus, “If it’s a boy, we want to name him Kyle.”

The Professor enters her completely. Marissa’s vagina seizes with surprise, but releases with pleasure. She feels a gush of wet escape her pussy. “Kyle is a solid name,” the Professor tells her.

He draws slowly out of her, but then thrusts in again, quickly. Marissa shouts, “Oh, Professor John!” Her body shakes with pleasure, droplets of sweat forming on her pregnant belly.

Her baby has increased the pressure inside of her, making her tighter than she was as a virgin. Her toes curl as she revels in the exquisite sensation. She’s more sensitive than she’s ever been before. Maybe it’s the change in my hormones? she asks herself. Marissa can feel Professor John’s every movement as his aged, but rigid, cock rocks inside of her. “You are so tight,” he moans.

The Professor cups his hands around her belly and feels her baby kick. “Your child knows you aren’t being faithful to its father.”

Marissa feels the baby kick too, and tingling excitement ripples across her abdomen. She looks up at the professor and sees his face contort in pleasure, his bifocals sitting askew.

The professor reaches down and starts stroking Marissa’s clit. Her legs twitch involuntarily, and her body shudders. Marissa grabs the edge of the desk and pulls herself towards her superior so that he can drive more deeply into her. The Professor grabs around Marissa’s legs with his free hands and bucks harder into his student.

All of a sudden Marissa, feels her orgasm coming. “I’m almost there!” She rolls her head back, “Don’t stop!!” The professor obliges, continuing to pump into her and rubbing furiously on her clit.

Marissa and Professor John reach climax at the same moment. She twists and contorts as the pain of a contraction mixed with the releasing pleasure of an orgasm emanates across her body. John clutches her legs to his chest as he shoots deep within her expectant body. He lets out a grunt of pleasure.

There is a knock at the door.

Abruptly both teacher and student are both brought back to the present. Before they have a chance to respond, the door opens and they hear, “Is everything okay Professor?” Then a head pokes through the door.

His eyes go round as he takes in the scene in front of him.

Marissa stumbles up as best as she can with her baby bump. “Matthew, this is not what it looks like!”

Matthew’s face gets dark. “I saw he was inside of you. I know what happened here; there’s no need to say anymore.”

“No, Matthew!” Marissa insists, but Matthew has snapped the door shut. Tears start to stream down her face.

“Like I said, he’s left you available for anyone to take. And, there’s no need to lie; we both know you enjoyed it,” the Professor tells her, zipping up his pants. He casually picks up her polaroids on his way out of the office and tosses them into the fire. “Also, the cryptozoology of the gargoyles – that needs to remain a secret.”

If you liked Christina Harding’s free story, then you may enjoy the rest of her UNDERNEATH THE GARGOYLE series as well. A PROLOGUE is also available for FREE download from Smashwords.

Purchase Underneath The Gargoyle: A Prologue at

Image courtesy of Christina Harding
Have a book you like to feature and promote?  Drop us an email at editorial@SimplySxy.com to get in touch!

You may also like...
Related Topics:christina harding, Erotica, Erotica Author, Excerpt, Sexy Reads, Underneath the Gargoyle