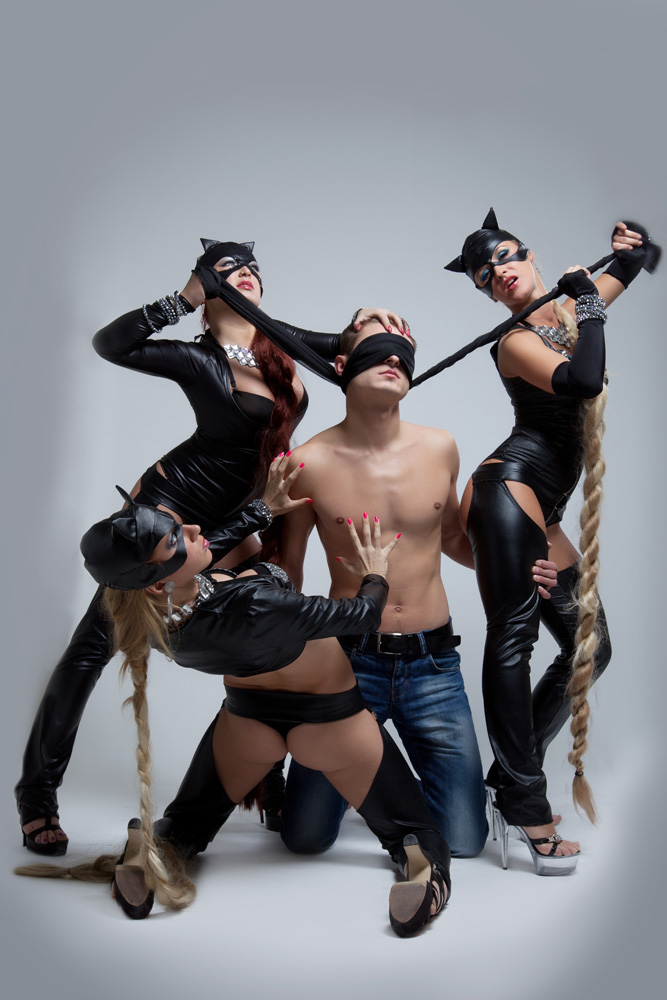 When I stepped into the dimly lit play space, I was shocked by the normalcy of it all. There were mostly normal looking people doing mostly normal things like socializing, making out in corners, sipping their beverages, sitting at tables and holding hands. As the evening wore on, some patrons shed some (or all) of their clothes. Ropes came out, floggers were swung, the occasional crack of a whip went from shocking to barely noteworthy, and an occasional moan or scream bubbled up above the din of conversation and music.

Over time, I shed the nerves and learned the rules, and that’s when the fun really began. So, here’s what I’ve learned about fitting in at a public play space.

Wear whatever the hell you want.

I cannot tell you how much time I spent worrying over what I would wear to that first party. I didn’t have anything fetish-y enough or black enough or sexy enough, and I didn’t want to look like a total newbie.

The one and only rule is to wear what makes you feel good.

Boom. It’s that easy. If the venue has a website, check to see if they enforce a dress code—often the only rule is to be street-appropriate when entering the club.

Sometimes play parties will have a theme—bikini bash or Mid Summer Night’s Dream—but those are generally suggestions rather than a requirement. If you feel great in a collared shirt and tie, rock it. Prefer pigtails, bra, and panties? That works, too. Maybe you feel hot in a tight pair of jeans and a cute tank top. Go for it.

Unless the venue states otherwise, the rule is that there are no rules. I’ve seen men in full business attire, girls in Minnie Mouse outfits, a guy in a toga, and I normally go in a flirty dress and comfy flats. But, if you want to do head-to-toe latex with 10-inch heels and a feather boa, most people won’t bat an eye at that either.

The beauty of the kink community is that there’s something for everyone. So just be yourself.

Every club has different rules about the activities that can unfold. Depending on the laws in your state or jurisdiction, certain things might not be allowed. Regardless of what does or doesn’t happen in your local club, people go to play parties for a variety of reasons.

If someone starts playing in public, they don’t mind being watched one bit. Is that couple on the couch in the corner getting it on? Go ahead and look. Maybe that woman in the sex sling being eaten out by one guy as another guy sucks on the first guy’s dick catches your attention. It’s hot. Watch and enjoy.

Don’t get too close, don’t crowd anyone, and don’t stare in a creepy way. But remember that they wouldn’t be doing these things in public if they didn’t want anyone to see.

It’s OK to respectfully appreciate the sexiness of what’s going on around you. Because let’s be honest, it’s hot as hell.

No matter what the scene is like, you need to be aware of personal space and boundaries. Never approach someone in the middle of a scene.

You might be burning with questions about how to throw a whip or how to swing a flogger just so, but it is imperative that you wait until the scene is complete before approaching someone. If a top is thrown off by someone stepping into the space just as they swing a cane or if you startle a bottom who moves just as a strike hits or a rope is positioned, someone can get seriously injured.

Give plenty of space. Do not judge or ridicule. Do not be rude or obnoxious. And only step into a scene if you’re specifically invited.

Play with others (if you want).

Part of why people go to play parties is to meet potential play partners. Some people enjoy pick-up play (playing with a stranger, negotiating a scene in the moment). Some couples like to find thirds or other couples to play with. Some single people go in the hopes of meeting other kinky folks. The reasons people attend these events are as varied as the people themselves.

Whether you’re hoping to make a friend or you’re hoping to play out a fantasy, a venue’s number one responsibility is to ensure the safety of all attendees. Most public play spaces have a universal code for scenes—red means distress—drop everything and stop right this second, yellow means slow down or pause and check in. If a dungeon monitor or other patrons hear these words and they aren’t respected, expect to find yourself ejected from the club immediately.

So here is what you need to remember if you’re looking to connect with a stranger: Consent is a yes. It is not silence. It is not the absence of a no. It is not a maybe, and it is never coerced or manipulated. Consent is an informed, sober, ongoing yes.

Conversely, no is a complete sentence. If someone tells you no, they are not obligated to give you a reason or an explanation. If you say no to an invitation, you don’t have to explain yourself to anyone.

The number one mistake I see single guys make at these events is to do the creepy approach and then pressing after someone says no. If you handle a no with grace and respect, people will pay attention and you’ll be more likely to get a yes the next time.

Treat every person with the utmost respect, and you’ll quickly earn your way into the hearts and pants of people who play at that venue.

Maybe you run into a co-worker while they’re wearing a ball gag and a pony tail in their ass. Maybe you met up with a hot date to play and your period came a week early. Hell, maybe you fart as you start a wrestling scene or burst into tears when the flogger hits.

Maybe you are right in the middle of fucking someone in a swing and a dungeon monitor comes over and informs you that you need a protective pad under the bottom’s ass for sanitary purposes, and now you have to stop mid-fuck to throw one down and readjust.

It’s all part of this wild, wonderful world of public play. Sometimes it’s so hot you feel like you might burst with need. Other times you just aren’t feeling it or you aren’t sure what to do.

Dungeon monitors are there to help answer questions about safety and keeping things sanitary. Other kinky folks are usually happy to show you a new technique or to let you try your hand at something they’re passionate about (as long as their scene is complete and you approach respectfully).

Remember that this is supposed to be fun. So, let it be weird and don’t take yourself too seriously.

Be aware of what’s going on around you. Be respectful of people’s scenes and space. Be unrelenting in obtaining (and maintaining) consent. State your needs and limits.

Get turned on. Get sexy. And let your freak flag fly.

What other lessons have you learned from playing in public spaces? What are your burning questions about public play? Comment below!

You may also like...
Related Topics:BDSM, Fetish, Fetish Play, kink