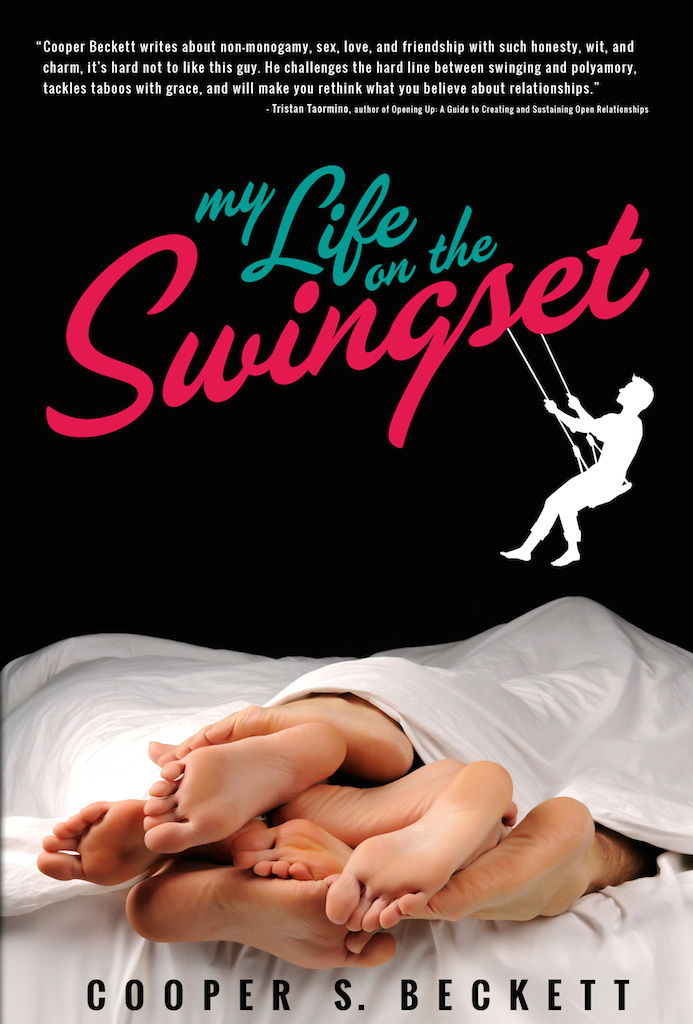 Starting with a first date with a couple of swingers, followed by working through social anxiety and shyness, recognizing the importance of touch in life, evolving feelings about love and expectations, having threesomes, orgies, and prostate orgasms, going through a divorce, and leveling up in life and sexuality. For five years, Cooper S. Beckett has written for Life on the Swingset, here he has collected personal essays, stories, erotica, and prescriptive “how-tos” into this memoir of his life on The Swingset. He speaks honestly and earnestly about a unique way to live life, one that allows for sexual and loving growth and experimentation, a strong sense of community, and the ability to do what we all crave whether we know it or not: Be honest with ourselves and others about what we want sexually, and out of life.

Sex is Sex is Sex
With or Without Penetration

Somehow, I managed to achieve that elusive disconnect between the traditional notion of sex (i.e. me putting my penis into things other than mouths) and the word “sex.” Dan Savage recently said that if there was one thing the heterosexual world could learn from the homosexuals, it’s that sex is any form of sexual congress. This concept ensures that we’re not simply stampeding to the perceived goal line, and don’t feel we haven’t achieved something if there isn’t penetrative penis-in-vagina sex.

I felt that way for a long time.

Recently I wrote about a party where I consciously tried to change this concept. I made myself aware of my pattern, which would be to try to blow my way through interactions to get to the sexual finale in order to be able to play with as many of my friends as possible in a short amount of time. It never had anything to do with not respecting the time I spent with each of them, I loved all of it. I care deeply about those women whom I manage to spend quality sexy time with at parties, and since many of them I only see at parties, it makes it all the more important that I find the time.

This line of thought was detrimental, however, because it caused me to put a tremendous amount of pressure on myself, perform giving oral, perform receiving oral (but don’t fucking come!), and then perform sexually all the way to the goal line. Often by the second tryst of the evening I was already beginning to struggle. Beyond that, all involved were lucky to get half-mast.

Hmm. It’s because I’d convinced myself that this was what was expected of me. When I start something (say, putting my hand down there and feeling her response) I ought to see it through, right? Right?!

Then I began to recognize that these notions I had about swinging at the beginning (most told to me by my “swinging sire” about whom the less said, the better) were, perhaps, incorrect…or at least misleading.

Early on, I painstakingly shaved every inch of my genitals because I was told that this was how things were done. That no one would play with me if I wasn’t immaculately groomed. That if I wanted it licked, it should be bare. I shaved daily, despite my skin clearly having a problem with this type of attention. It took my doctor asking me why on Earth I keep shaving when my body clearly doesn’t want me to for me to wonder about the logic of what I was doing.

So I stopped shaving, and nobody cared. Nobody who mattered, anyway. In my attempts to live up to the “swinger standard” that was sent down from on high, I didn’t see what was right in front of me. Rules only have value if you, and those around you, feel they have value. It amuses me (and horrifies in equal part) that a group of people such as we swingers, so hell bent on ignoring that which we “should” be doing (i.e. being monogamous, sticking with one gender or another) could get so caught up in other “shoulds.” You should always come, you should always get it up, you should always reciprocate, you should always fuck. Why the hell would these ideals always line up?

Well, the short answer is that they don’t. And that we’re often sheep. We reject one dogma to follow another and get swept away. In the past, I’ve also felt somehow shortchanged if events didn’t progress, if I “only” got a hand job. I stop and think about how amazing and disgraceful a thought that is, and how my 16 year old self would conspire to have me shot if he knew I’d even considered that thought. I was jaded, and had a bad case of “the shoulds.”

But perhaps I’ve achieved enlightenment. Things certainly feel different. I’m currently flying the final leg of my trip back to Chicago from a week in paradise at Desire Resort & Spa, the first Life on the Swingset trip to Desire. At the resort I decided to no longer focus on penetrative (penis-in-vagina) sex. It was like a weight had been lifted. The removal of expectations about what things would become allowed us to concentrate instead on what things are.

To live in the moment, for a change.

I focused on whether I was giving or receiving pleasure. I could make out for a while with someone. I could perform oral on others. I could allow an urge to simply do one single thing with someone be paramount. And just as when I stopped shaving, nobody pitched a fit and banished me. In fact, everybody I was lucky enough to encounter seemed to be as excited about what was going on in the moment as I was. Never was there a “We’re not going to fuck?” or “Why aren’t you hard?”

I realized that I’m far more interested in the pleasure of others than myself. I spent the week giving pleasure to those open to receive it; orally, digitally, nJoy Elevenally.

“Cooper, you braggart,” you say, “you think you’re better than me?”

Not at all, random voice guy who interrupts my essays sometimes. I receive as well. I had some truly spectacular moments of orgasmic bliss. But because I was not focused on when we would complete the transaction and I would insert my penis into her (or his, I’m equal opportunity) nether regions, I was able to see every bit of sexual interaction as the glorious experience it truly is. Nothing makes people want to please you more than putting yourself out as a giver of pleasure.

And isn’t that a wonderful way to live?

So, mark the date and time. My last party was not an isolated incident of emotional evolution on my part. That was just proof of concept. Desire represented physical, emotional, and (dare I say) spiritual growth within me.

My heart is full of joy.

Find out more and purchase My Life on the Swingset at:

Informational page for book, and purchase from the author: http://my.lifeontheswingset.com

The man in charge of Life on the Swingset, a website and podcast by and for the sexually open. In addition to writing for the site and hosting the weekly podcast about sexuality and non-monogamy, he travels the globe throwing play parties and teaching classes to help people open themselves up and color outside the lines of their sexuality.