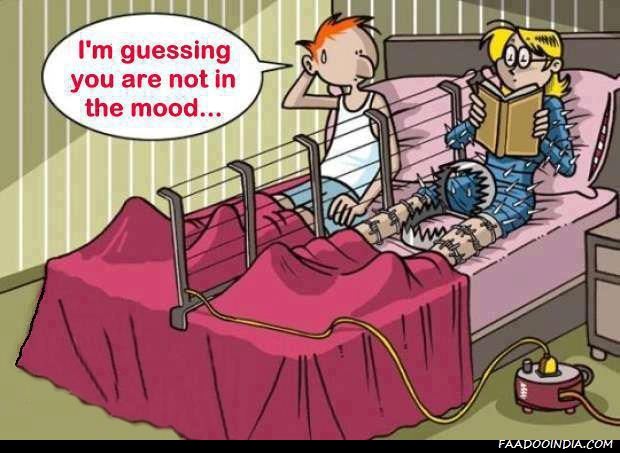 Read the cartoon. “I’m guessing you are not in the mood…” Cue laughter.

Why does this evoke laughter? Even I laughed initially when I read it   before I considered other perspectives. I was curious whether women in   general would find it amusing due to familiarity with that situation, or  if they would be upset by it. And what about men?

In my private practice, I frequently witness this dynamic with  couples of mismatched desire levels, albeit not to the extent of barbed wire. In bed at night, here’s the monologue that seems to go through the  woman’s head:

He will probably want sex tonight. It’s been a little while so maybe I should. But I’m exhausted and don’t feel like it. If I yawn loudly, he’ll see the subtle clue that I’m too tired and not ask, and then I won’t feel guilty about saying no.

This cartoon cuts through the mental game playing as the woman  blatantly presents her opinion about sex that night. The man scratches  his head, and with a bit of uncertainty, states the obvious.

I’m mixed about how I feel about a cartoon like this. This is a stereotype, and such stereotypes are problematic because they can  enforce already restrictive gender roles. On the other hand, this is how many couples operate, and humor is a known path to opening dialogue around uncomfortable topics.

So I posted the cartoon on Facebook and asked for people’s initial  reactions, and why they had that reaction (both publicly and in private message). The responses were incredibly varied from the extremes of   “this is depressing” and “this isn’t funny,” to recognition that “as a  mother of three children, I laughed,” to “lighten up people, it’s a  joke” (which incidentally, was from a man). The most poignant responses were those indicating opposing gender perspectives on who was  responsible for the couple reaching this point. As one friend posted, we   need to ask why this is happening. I quite agree. What differences are   women and men learning about sex and experiencing around sex that makes  this a national joke? Clearly we’re missing the mark, and each other.

From a woman’s perspective, why would she get to a point of desiring physical barriers between her and her partner? She may be exhausted and   overwhelmed from juggling so much, doesn’t feel much of a physical sex   drive, she’s bored with the same old in the bedroom, or she’s built up a  wall of resentments that make opening up sexually difficult. These are  all common explanations I hear from clients and quite valid. The  Facebook crowd added that a discomfort can exist if the man has cheated or if the woman gets tired of saying no. This was exemplified by the  comment, “another clueless horny man,” from a woman who thought the  cartoon was funny because it’s true. There were also some women who felt   that the depicted couple was sad and distressing, because clearly her other modes of communication had been ignored.

The sad theme was also mentioned by several men, who saw it as  frustrating to a man. I perceived these responses to mean that to  encounter such roadblocks when desiring sexual intimacy with your  partner is upsetting. Continual rejection can take quite a toll on a  man’s self-esteem and confidence. On the other hand, several men found  humor in the cartoon with the “it’s funny because it’s true” response  for a few reasons: because women don’t communicate directly enough for  men to understand, so the blatancy of the cartoon is appreciated; it  “blames” the woman for her lack of interest in sex; and that the use of a   bear trap and fencing in bed is just funny. As to why a man  could get to this point in a relationship, in my practice, I’ve found  that men are more likely to continue to have physical sexual desire  throughout a long-term relationship, while their female partners don’t  experience the same type of physical urges. It can be difficult for men to understand and accept this shift.

That being said, I would be remiss to not share the perspectives of  the women and men who expressed the opposite view. A couple women were  in the shoes of the “man” of wanting more sex. One man responded, after a   chuckle, that sometimes guys don’t want sex either. There were also  some people who recognized that it takes two to tango, and both  partner’s played a main role in creating this sad situation. I certainly   see all of this in my practice as well.

What is the lesson here? In relationships as depicted in the cartoon,   it’s vital to realize that the woman is not trying to be a gatekeeper.   Additionally, the man is not trying to be an ass. Despite the difficulty  in each partner accepting this, it is actually quite hurtful and  guilt-inducing on both sides. Drop the defensiveness and get to the  vulnerable truth, and allow space for your partner to do the same. Get  to the heart of your needs, desires, and motivations, and open to a   teamwork approach. Otherwise that electrical fence will get more charged  and divisive.

And the funniest response on Facebook? One of the class clowns from  my high school did not disappoint. He wrote: “I’m wondering what book  she’s reading? Maybe it’s 50 Shades of Grey, in which case the guy should hang in there as she might change her mind shortly.” Thank you, Doug.

This article has been republished with permission from our contributing author, Dr. Jennifer Gunsaullus. Please visit Dr. Jenn’s website to view original post and more of Dr. Jenn’s works.

Jennifer “Dr. Jenn” Gunsaullus, Ph.D., is a sociologist who works as a sexuality and mindfulness speaker, and a relationship and intimacy counselor and coach. She specializes in helping women, couples, and groups deepen intimacy, strengthen communication, and improve trust and self-expression. As a sociologist (different than a psychologist or a licensed therapist) she merges a blend of coaching, counseling, education, and awareness-raising in her work. Dr. Jenn got her start in the sex and relationship field 20 years ago as a sexual health peer educator at Lehigh University in her home state of Pennsylvania. She now merges her practical training in sexual health and academic training in sociology with her passion for holistic health and mind/body/spirit perspectives.

Dr. Jenn is a frequent lecturer on relationship and intimacy topics. From wine bars to yoga studies, college classrooms to senior centers, and the LGBT community center to Mensa gatherings, Dr. Jenn offers unique and powerful presentations on healthy communication and fulfilling intimacy. She has also been an adjunct professor for courses including Human Sexuality, Women & Health, and Social Psychology. Dr. Jenn was a contributing writer for Pacific San Diego Magazine and is a Sex & Relationship Expert for San Diego Fox 5 News, San Diego Living, and UT-TV. In 2010 she was named one of San Diego Magazine’s “Women Who Move the City.” In addition, she is on the Board of Directors for Jeans 4 Justice, a nonprofit to end sexual violence, and is on the Communications Leadership Team for the nonprofit donor’s circle Women Give San Diego.

Dr. Jenn has been actively involved for many years with Eve Ensler’s play The Vagina Monologues as an actor and director, and was named a “Vagina Warrior” at Cal State San Marcos in 2011. She has an impressive collection of more than 150 episodes of her video podcast show about sexuality & relationships called In The Den with Dr. Jenn. Read below to learn more about this sex talk show, filmed in front of a live studio audience, in San Diego, CA.