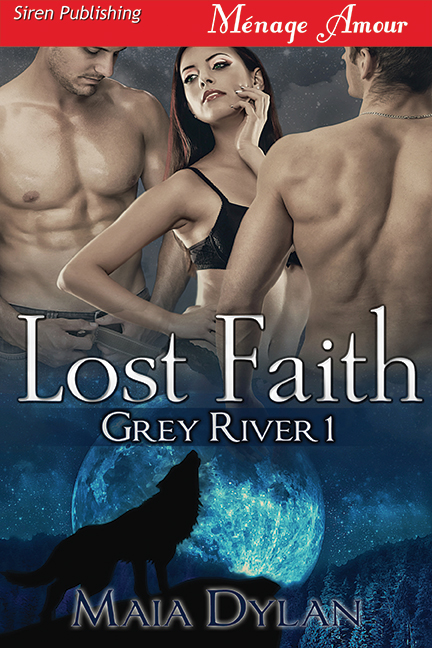 Is it better to have loved and lost than never loved at all? For Ty and Trent Jamieson, the Grey River pack Alphas, they would say either would be preferable to both!

“Oh God!” Faith groaned, or rather tried to, but it was difficult to understand given the fact that Trent had his tongue down her throat. Wanting to be an active participant in what was proving to be an explosive first introduction to ménage sex, Faith sucked firmly on his tongue and plunged her hands into his hair. Her ears were ringing as her body flew toward a precipice she knew that once she flew off, she would never be the same again.

Ty suddenly plunged a finger into her cunt and rubbed an unknown place within her that sparked such pleasure she tore her mouth from Trent’s with a scream, and her body began to tremble violently.

“Fuck yeah, baby, Ty’s found it, hasn’t he?” Trent growled against her neck as he continued to fondle and pinch her nipples, heightening her pleasure. “Ty’s totally hit your sweet spot.”

“You have no idea just how sweet she fucking is, Brother,” Ty growled against her pussy as he added another finger and continued to rub her in just the right spot, the trembling increasing to the point Faith was sure she looked like she was having a seizure. Her body felt like it was hurtling toward something big. Faith needed something to help her, but she just didn’t know what.

“Anything, Faith, for you, anything,” Ty rasped before he swirled his tongue around her clit, then sucked it into his mouth, gently biting the swollen nub. Faith threw her head back and screamed as an orgasm the likes of which she had never felt before overtook her.

“Oh fuck yeah, baby, do it, come for us,” Trent groaned and growled against her neck. It seemed to crest again as Ty continued to plunge his fingers into her sopping pussy and sucked harder on her clit.

All too soon, the tremors slowly began to ebb, and the world began to fall back into place. Faith could hear not only her own harsh breathing but the constant growls of the man still steadily licking her and lying between her spread legs. She could also feel Trent’s hot, harsh breath against her neck.

Suddenly Trent moved away from her, and Ty’s form loomed up and over the top of her. His mouth glistened with the juices from her own body, but what caused her to almost stop breathing was the look in his eyes. As if he were on the edge of complete insanity, an insanity she had caused with her response to him.

Of their own accord, her legs wrapped around him as he settled in the cradle of her hips, the hard, blunt head of his weeping cock pressed against the swollen folds of her pussy. He held himself above her on arms that rippled with muscle and restraint.

“Faith, I have to take you.” Ty’s voice was slightly garbled, and Faith knew that his wolf, stronger than most due to his alpha status, was fighting for control.

Faith would have dearly loved to believe that the reason for that was because of the mating heat and Quickening, driving him to complete their mating with her by biting into her shoulder, marking her as his for all time and for all to see. But she knew that wasn’t the case. If they had experienced the Quickening, it would have been years ago when they first met at the diner. As she understood it, the Quickening was so powerful that wolves could barely control their reaction to their mates, and they certainly couldn’t hold back from it.

No, this was not the Quickening. It was simply affection and intense desire that drove Ty’s wolf forward.

“Then do it, Ty,” she whispered as she lifted her arms to wrap around his shoulders and urge him to her, gently rolling her hips in invitation. “Take me.”

The words had no sooner left her mouth than Ty thrust home, filling her with his cock. Both of them threw their heads back and groaned at the sensation.

Faith gripped Ty’s shoulders and held on as he started to move within her, slowly at first and then with more strength and power. He fell against her, kissing her with a passion that left her breathless. She could taste her own salty musk on his lips, but that simply added to her pleasure. Oddly, the thought of tasting him and his brother flew into her mind. God, she would love the opportunity to take them into her mouth and learn them with her tongue. She wouldn’t stop until she had taken every drop they had to offer.

“Hell yeah, you would, Faith. You would take every damn drop, sweets,” Ty growled against her lips.

Faith started to wonder how Ty knew what she was thinking, but then he added a twist with his hips when he slammed home, which ground his body against her rapidly swelling clit, causing all thought to evaporate.

Maia Dylan lives, loves and works in beautiful New Zealand. She married her best friend and they have two adorable, but stubborn children who obviously take after their father. Maia’s career has featured a lot of travel, and she has filled her time at airports and in the air with books, books and more books. Her love of erotic paranormal romance has seen her amass a huge library. She has been an avid reader and lover of ménage romances since she read her first book in this genre about three years ago. In January of this year, Maia submitted her first ever manuscript to Siren Publishing. She wasn’t at all confident that it would be accepted and in fact she was expecting a nicely worded email with a resounding no! Much to her surprise less than two weeks later she had an acceptance and a signed contract in hand. Since then she hasn’t looked back and currently has three books in her Grey River series set for publication. Outside of writing, Maia loves to eat, so she loves to cook! Her herb garden is legendary, but she still has issues getting tomatoes to grow. She’s been a performer for years, and has even sung on international stages, she would love to own a classic Ford Mustang one day and of course have the opportunity to race it on a race track without fear of a speeding ticket. Although ultimately her dream is to be able to write full time on a sandy beach with a Mai Tai at hand, she is quite happy to fit her writing in when she can. As long as someone reads her books, gets a laugh and maybe come to love her characters and much as she does, then she feels that she is living her dreams no matter what!