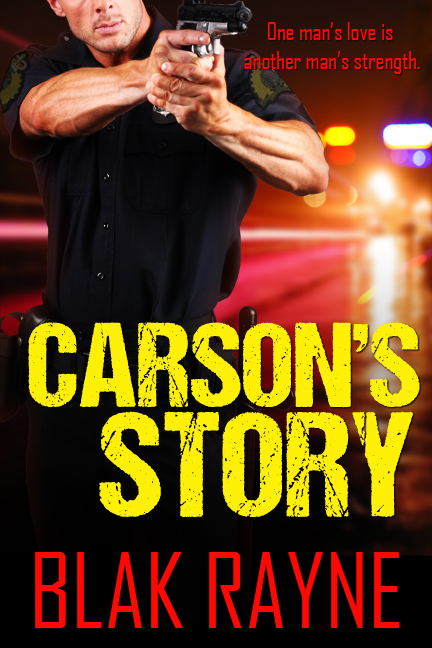 ‘One man’s love is another man’s strength.’

A twenty-year veteran of the police force, Carson Mackenzie has worked hard to carve his niche in a demanding environment where stress is the operative word. Thanks to his occupation, he’s never relied on anyone, not even his husband Stephen until he’s involved in a severe car accident while on duty one night. His recovery isn’t smooth; reoccurring nightmares of the crash play havoc with his mental health and he starts to experience a new kind of stress—something he’s never dealt with, anxiety.

Adding to his problems, Dudley Kramer corners him in a restaurant, a shady art dealer who almost ruined his marriage and career once before. Arrogant and self-serving, Dudley wants sex and he’ll do whatever it takes. Too ashamed to ask for help, he tries to handle the situation alone but quickly discovers the art dealer won’t take no for an answer.

The next morning I was up bright and early. And as per usual, I had to fight off the nightmarish images of a restless sleep and the beginnings of a headache. I slouched against the kitchen island, drinking tea; the first rays of sunlight soaking through the veil of early morning mist in the backyard. Like some powerful sorceress, the sun chased away the last remnants of the night.

At least that’s what I had begun to do, enjoy the view. I have a fetish for men in suits, expensive suits, and men who give the impression of being wealthy and can play the part—a guy who can dominate a boardroom. That’s what had attracted me to Stephen in the first place, his clean cut, Fifth Avenue appearance.

Stephen, in his best suit, kissed my lips hard and took the porcelain cup from me and placed it on the island with a clunk, scraping the granite. Stretching my track pants past my buttocks and then my knees, he sank to kneel before me like I was a god, his warm breath on my belly prickling the short blond hairs.

He knows every erogenous zone on my body, and his thumbs did the dirty work, circling and massaging the lean cut of my abdominal muscles while he nipped the deep, inner crease of my thigh next to my balls. I flinched and growled, lifting my leg slightly. He’d hit the spot, the one spot that drove me insane. He grazed it again with his teeth and a jolt of sexual electricity shuddered through me, and my cock was weeping. But my temples also started to pound with the rise in blood pressure. I’d wanted to tell him to stop, but he seemed so eager to please me, I didn’t have the heart. What could I do? We hadn’t fooled around in ages.

He didn’t fondle much. Instead, it was straight down to business. He held the base of my enlarged shaft in a fist, then lapped the pre-cum glistening on the slit and downed it, sucking hard.

The pressure gradually intensified, and my fingers grazed his bobbing head, sinking into his scalp, tangling in his soft dark hair. Groaning, I stared at the magnificent image, as I brought his head forward and back to meet with each pelvic thrust. He squeezed my buttocks, drawing me into him, fingers breaching the crack of my ass. Another low groan rose in my throat when he stimulated my hole. Fucking his mouth was a beautiful thing and it drove me wild. The headache was there, a faint pulsation in my temples, threatening to wreak havoc, but I ignored it, drowning myself in the heat of the moment.

Smacking a hand on the counter, I gripped the cool stone leaning sideways with my leg somewhat elevated and balls tight. An overwhelming and throbbing wave took over, and I became powerless to stop the euphoria. I gasped loudly, quenching his thirst, and in seconds nearly passed-out. He swallowed and rose a bit, kissing me everywhere. I was spent and I hadn’t done a thing. I just wilted over the counter like a dying flower in the hot summer sun. He nuzzled my damp cock and belly with tenderness.

“I’m sorry I’ve got to leave,” he mumbled, kissing my chest again and gave me a loving hug.

“It’s fine, baby.” Somehow, I found the strength and dragged my track pants up, one side, then the other.

He disappeared in the central bathroom to return minutes later, suit realigned and smelling of toothpaste and soap. We kissed and he winked at me, adjusting the knot at his Adam’s apple. And I just stood there, burning in the after-glow from head to toe. He was the only man who made me feel that way, precious, as if I was the most important person on earth.

“I’ll be back later. Is there anything special you’d like for dinner?”

I’d wanted to beg him to stay home, but he had a job to do, and after three days babysitting me, he was due for a break. “No. Don’t be all night.”

We kissed once more and I followed him outside onto the footpath, feeling a pang in my chest.

Soon as he got inside the SUV, I put a hand up, then returned to the house and clicked the door shut. I had to take a T3 and retrieved my prescription from a cabinet in our bedroom en suite. I hate taking pills. But as the headache took hold, battering my brain, it became necessary. Back in the kitchen, I poured a glass of water and downed the small white tablet. Some days were better than others when I managed to avoid getting a headache, but on others, they’d get so bad I’d have to lie in bed.

I sat at the island and scrolled the contact list in my cell phone until the foster program organizer’s number came up, then I hit talk. “Hi, is this Trudy?”

“It is. May I help you?” The slightly winded female voice sounded husky and mature.

“My name is Carson Mackenzie…Marion gave me your number. I understand that you run a foster-care program for dogs.”

“We do—my husband and I. Are you interested in becoming a foster parent, Mr. Mackenzie?” she gasped and then sniffled.

“Actually, I am.” I touched the countertop, tracing the illusion of a fissure in the granite with a fingertip. “How do I become a foster parent?”

“Oh good! Well, that’s a start. What I really need, Mr. Mackenzie, is to meet with you, see where you live, make sure your home is suitable or not. Then there’s an enrollment form to fill out. When would you be available for my husband and I to stop by?”

Sliding off the stool, I put a hand on top of my head and wandered a few feet, considering the question. “I think tonight would be fine.”

“That would be great.”

Paper rustled through the line and she asked, “May I have your address, please?”

I gave her the address and directions standing in front of the patio slider, then said good-bye and hung up. Stephen had given his blessing, which had come as a surprise, considering he wasn’t crazy about dogs. During our trip to Greece, we’d talked about many things and his preference when it came to pets was one; Stephen loved cats. It turned out Myron had been the one who’d insisted on getting the dogs. And when I thought about Stephen’s personality and grooming habits, a cat would be more suitable. One day Stephen came home and there were two dogs in the house. He hadn’t been pleased, but accepted the animals in his life to appease Myron.

Admittedly, I can be self-centered at times, but making a decision, especially such a serious one without consulting Stephen first, I’d never do. I picked his number from my contact list and pressed talk, excited to tell him; the line rang and clicked.

“You must really miss me,” he said with a gentle laugh. “I’ve only been gone twenty minutes.”

“I always miss you. Where are you?”

He was quiet a moment and I knew he was trying to absorb what I’d said, then he replied, “Stuck in traffic.”

“It’s okay, hon, you know I love listening to your voice.”

My cheeks got hot. “Thanks.”

“I called that lady from the foster program.”

“Oh, and how did that go?” He seemed genuinely interested.

“Good. She’s coming over tonight around seven. I was wondering if you could be home by five?”

“I can. I’ll pick up some Japanese on the way.”

“Aren’t you on speaker?”

“Nope. I can never get it to work right, sorry. I’ll call you back shortly,” he said extra quickly and the line went dead.

“Okay….” I slumped into a chair at the kitchen table staring at my cell phone, exhaling a dreary sigh.

Love to read more of Carson’s Story? Purchase it at the following links or visit Blak’s website for more details:

You may also like...
Related Topics:Blak Rayne, Carson's Story, Erotica