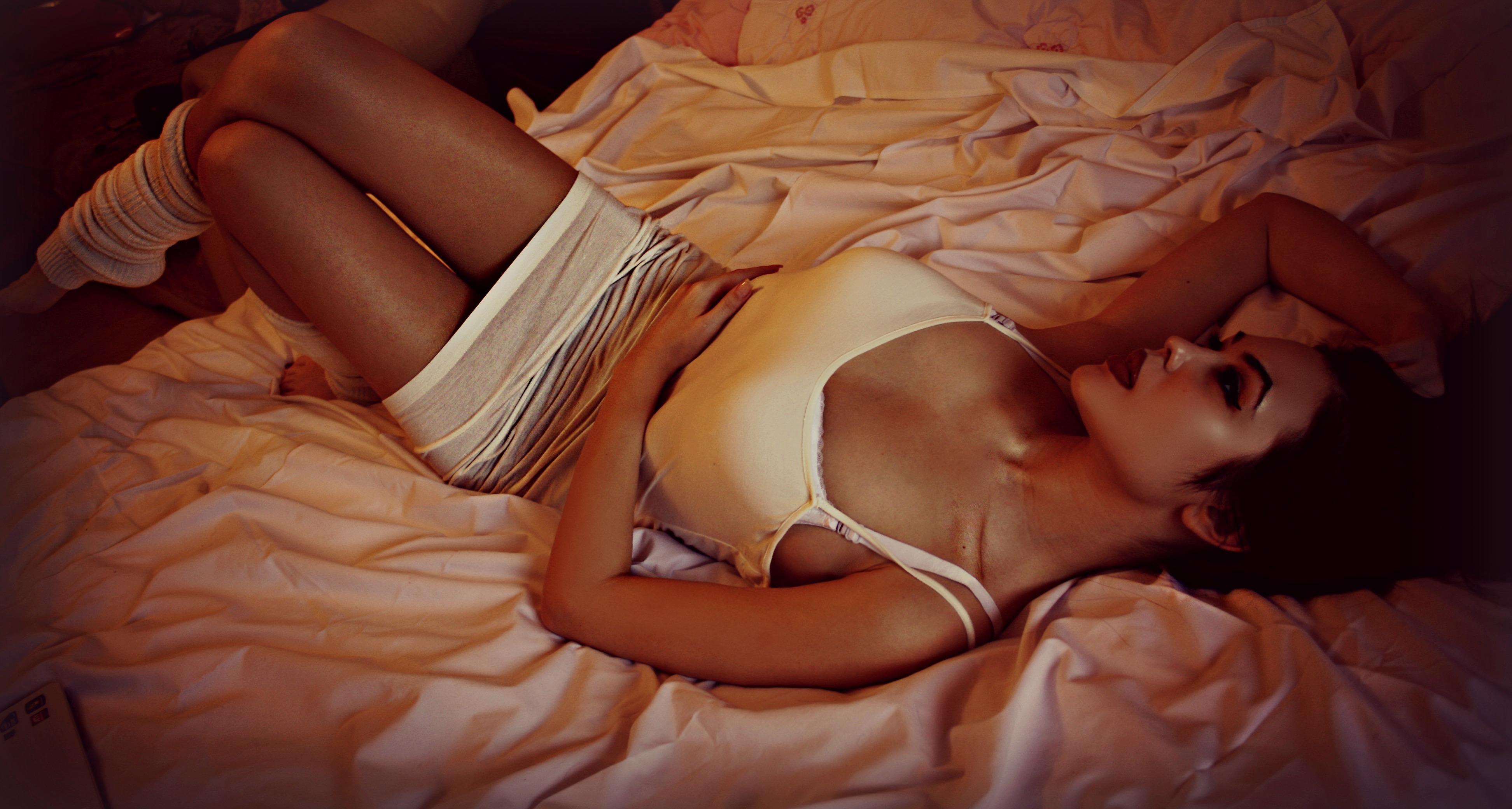 I teach my clients that one of the best ways to understand men is to (gasp!) talk to them, ask questions, and really listen to what they have to say. In the world of entrepreneurship, this is known as soliciting customer feedback, a way of gaining understanding and empathy for the customer’s experience, for his or her world. I am a firm believer in the power of customer feedback when it comes to dating. The end goal is to better understand men’s deeper, more latent needs; it is not to mold yourself into what you think every man wants you to be.

I love “he-said/she-said” pieces, because you get direct and honest access to how men think and feel. My latest “he” is Mr. Locario, a no-nonsense dating and relationship coach who has been featured on  Vh1, FUSE, The Dish Network, TLC, ABC Family, The Tyra Banks Show and Anderson Cooper.

The question I posed to him is a common dilemma in the dating world: When’s the right time to sleep with someone you’re dating?

I appreciate how this conversation ended in a deeper understanding of men’s needs when it comes to dating and sex. Read through to the end to see what conclusions I came to based on this back-and-forth.

Mr. Locario: I think the right time to have sex with a guy you are dating is at least by the third date. You should not wait any longer, because the guy might start to lose interest in you or think that you are playing games and just using him for attention or for his money. Also, the guy you are dating is most likely dating other girls. If those other girls are having sex with him and you aren’t, he might start paying more attention to the other girls.

Neely: That’s a bit surprising to me. So…third date: That’s, say, three weeks of knowing someone. At that point, he’s practically a stranger. What do you know about a man and his intentions after such a short amount of time? Mostly, though, I’d like to respond to your “he might start to lose interest” comment. I teach women to have boundaries and to not do things that go contrary to their needs out of fear of losing someone. Sleeping with a man so quickly simply out of the fear that he’ll ditch you for someone else is the wrong way to go, in my opinion. Now, if a woman is comfortable with this sort of casual sex and can detach herself from the outcome, then I say more power to her. It’s about knowing yourself and what you’re comfortable with. If you can honestly say to yourself: “I’m not sleeping with this guy as a way to manipulate him or trade sex for love. I’m sleeping with him, because I really want to for the sake of my own needs, and I’ll be okay with whatever happens,” then go for it. If you can’t genuinely say that to yourself, then continue to wait until you’re in a more comfortable place, or until you’re more certain that he values you for more than just a roll in the hay.

Mr. Locario: I agree that a woman should do what she is comfortable with. I’m not saying to sleep with a guy out of fear that he might lose interest, but I am saying that the reality is he might lose interest because you are taking too long to sleep with him. Most guys will think that you are not interested in them because you are not sleeping with them. They might think: “Why is this girl going out with me? She must not like me because I’ve seen her three times and we still haven’t had sex yet.” Also, I feel if you are not comfortable enough to sleep with a man after three dates, then you are not really into him and should stop seeing him and give him space to see other women who are comfortable enough to have sex with him.

Neely: From a woman’s perspective, it often works a bit differently. Are you’re saying you’d be out the door if a woman (who you are really into and has most, if not all, of the qualities you are looking for in a girlfriend or wife) were to say to you, “I really enjoy spending time with you, I’m super attracted to you, but I know myself and I’m not comfortable sleeping with someone so soon. I prefer to wait a little and get to know each other more, and if you’re not okay with that, then I totally understand and we might not be a good fit for each other”? A woman’s ability to walk away from a man and see how he responds to her stated needs is an essential tool for women in today’s dating world. I’ve seen enough women in my lifetime be absolutely crushed by thinking that having sex with a man means sealing the relationship deal, when that’s not at all what he was thinking or looking for. I’m not saying that you have to disengage from all physical relations, but certain acts can be a very emotional thing for a lot of women, so when it does happen it’s not as easy as you think to bounce back if the guy disappears or loses interest. So at the end of the day, it’s about knowing yourself and what works for you and weeding through the guys who will respect your boundaries.

Mr. Locario: I see what you’re saying but what happens is most women don’t express what you’ve just stated, so at the end of the day it’s a communication thing. If a guy was dating a woman and she said those things and he really liked her he would keep seeing her, but if she didn’t say anything then he would assume that the woman is not really interested in him or playing games because he would be thinking, “If she really liked me we would be having sex by now” or he might be thinking, “What’s taking so long for us to have sex? If she doesn’t have sex with me soon then I am going to keep it moving.” Again, waiting this long might still make him lose interest, because if he is dating another woman at the same time as you and likes her just as much as you, but she is having sex with him then she might grab his attention, and then, before you know it, he isn’t calling you as much as he used to.

There was actually a story on ABC dateline about a woman who would just go out with guys so that they could buy her dinner. A lot of guys are getting hip to this. So from a man’s perspective he doesn’t want to waste his time and money on a woman who he feels has no interest in him sexually. A woman waiting more than three dates to have sex with a guy looks like a woman who has no sexual interest in him. So I think the communication has to be clear. If the communication is clear that she is into him then things would be fine and he will most likely continue to see her. Also, when it comes to having sex I feel that a woman should just have sex because she likes the guy and should enjoy the moment, but a woman first has to be comfortable with herself in order to do that.

So what can you take away about men’s deeper needs by the end of this back-and-forth between me and Mr. Locario? Here are my thoughts:

Start talking to men (friends, acquaintances, family members, and the like). Start soliciting customer feedback like a true dating entrepreneur. What can you find out that will help you in your entrepreneurial venture to create lasting love?

For the past decade, Neely has been writing and speaking about dating, love, and relationships. She has been a featured expert in a wide array of media outlets and has created and hosted two radio shows and an internet TV show on the subjects of dating, love, and relationships. Drawing from her Master’s degree in Counseling and her passion for helping others, Neely’s dating coaching practice The Love TREP®, based in Boston, is dedicated to teaching and coaching smart, educated, professional women across the world, ages 25-42, how to use an entrepreneurial spirit, mindset, and approach to find healthy, happy dating lives that lead to healthy, happy relationships. Along her own entrepreneurial journey in love, Neely met her fiancée. She is inspired every day by the love that she has found with him (and is especially grateful for this relationship after spending many years struggling with dating). Concurrently to her time as a dating coach, columnist, and speaker, she has worked as an academic advisor at one of the top schools in entrepreneurship education in the country. During this time, she learned a thing or two about entrepreneurial women and men, entrepreneurship, and the ways entrepreneurs think and act when building their business ventures. She was inspired daily by the people around her (students, faculty, administrators, and alumni) to think differently about the way we approach the subject of entrepreneurship and its uses. In other words, people can use an entrepreneurial mindset, approach, and framework to help them create lasting love in their lives. She has taken this collective and abundant knowledge of both the worlds of dating/relationships and entrepreneurship and spent over a year researching and writing her first book Skin In the Game: Unleashing Your Inner Entrepreneur to Find Love, which shows women how to become entrepreneurs in their dating and love lives, so that they are creating, building, and shaping their love stories. Her book is not about offering generic dating advice or one-size-fits-all relationship advice; it’s about approaching the dating world as an individual and putting the power back in your hands so that you can innovate in your love life. Fittingly, Neely became an entrepreneur herself, naming her coaching business The Love Trep® because of her strong conviction that the entrepreneurial way has tremendous value for singles looking to find love. Indeed, drawing from entrepreneurial principles to inspire singles to action informs many aspects of her coaching philosophy.