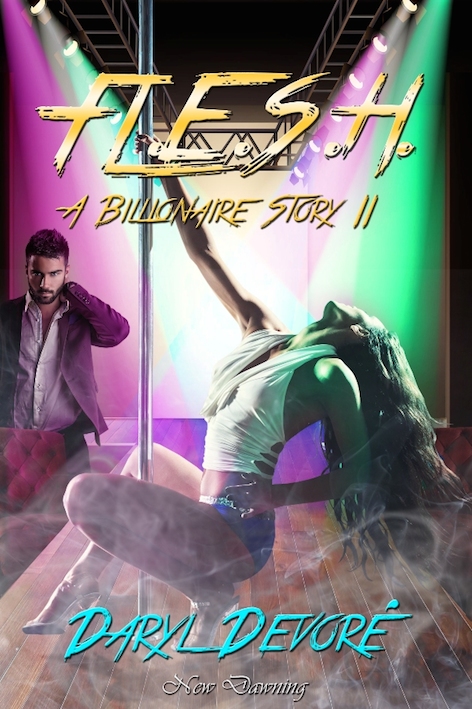 As the owner of a small, struggling dance school in a depressed neighborhood Fuchsia Quinn supplements her income with a late night job at a dive bar. Peyton Lang, having run from a bad neighborhood, lives the lifestyle of a successful billionaire. After a lusty night with a hot pole dancer, Peyton and Fuchsia’s worlds are about to collide.

When the cab stopped, Big Tipper handed the driver some bills, thanked him, and held the door open for her. Just outside the hotel’s front entrance, he touched her elbow and stopped. “You know, before we do this, we really should be introduced. Keeping with the anonymity thing we’ve got going on, what should I call you.”

“My stage name is Flame.”

A sexy grin crossed his mouth. “Oh yeah. You got that right. Hot. Flaming hot.

“And you? ‘Cause I’ve been calling you Big Tipper and sorry, I know that’s rude.

Pete stepped forward. The doors slid open. The receptionist behind the desk gazed sleepily at a small TV. Flame guessed a car chase scene from the sounds of gun fire and screeching tires.

After registering for the room and paying with a credit card, Pete held out the key card and led her toward the elevator. Once inside, she asked, “Which floor?”

She rolled her eyes. “There’s only six floors. And I doubt this place has a penthouse.” She leaned on the back wall. Pete stood next to her. It felt like fire poured from his body. Her head swam. The lurch of the elevator stopping didn’t help the dizziness building in her.

It was all she could do to not rip her clothes off and jump on him. Each step down the hallway increased her pulse and blood pressure. He stopped, slid the key through the lock, the little light turned green, and he pushed the door open.

Inside was a typical hotel room: bathroom, small fridge, long dresser with a TV on it. Pete flicked on a light and pointed. “The only room in the hotel with a king size bed. But first.” He pulled her close, reached into her kangaroo pouch, and pulled out the can of pepper spray. “Let’s just get rid of this.” He placed it on the counter in the bathroom and then scooped her up and dropped her onto the bed. His hands slid under her sweat shirt and pulled it over her head. She hooked her thumbs into her waist band, kicked off her shoes and wiggled her pants off.

The bed shook as Pete climbed on. Resting his weight on his hands and knees, he ran his gaze down her body. “I love nothing more than a woman who knows what she wants and doesn’t waste time wearing underwear. You are beautiful. From these lips.” He placed a quick kiss on her mouth. “To these wonderful—”

He cut off his sentence when he slipped a nipple into his mouth.

With a small lip smack, he popped the bud from his mouth and shifted his body. “To the heaven that is waiting to be discovered.” He trickled his fingers down her belly and between her legs. His finger caressed her clit for a torturously brief moment. She thrust up her hips, hoping for another touch, but was agonizingly denied.

His mouth latched onto hers. She could feel his lust, not only from his erection crushing into her belly, but from the intensity of the kiss. The knowledge this man wanted her exploded her nervous concerns. At the club, he’d captured her attention. Her body had reacted instantly. She’d wanted him. In the diner, everything he’d said only aroused her more. Now, she lay beneath him, reveling in the kiss and sensation of his roaming hands. Her body strained up, trying to eliminate any distance between them. She hooked her legs around his waist and ground her groin against him, and then opened her mouth. She was offering to be taken and she knew he was willing.

His tongue slipped between her teeth. She flicked the tip of hers across the bottom of his. He groaned. She responded. Their tongues wound around each other like tangled spaghetti. Moans escaped her throat. Her nipples pressed against his t-shirt, begging to be suckled.

She broke off their kiss with a gasp. “Question?

“What?” His voice was equally breathless.

“Why do you still have clothes on?”

He leaned back onto his knees. “I was asking myself exactly that.” He pushed off the bed, tugging at his shirt. Flame grabbed the covers and tossed them to the end of the bed. When she turned, Pete stood naked, cock proudly erect. Walking on her knees to the side of the bed, Flame bent forward. The tip of his cock grazed under her chin. A dusting of dark hair circled his belly button. She poked her tongue in and out.

“Mmm. Promises of things to come.” He ran his fingers through her hair.

“Oh yeah. There’s going to be cuming. And groaning.” He bent lower and kissed the top of her head. “You know this is pretty much gonna be monkey sex. We’re both wired pretty tight.”

Flame bent her arms and tickled her waist while performing her best monkey imitation. “Then let’s get the party started.” She braced herself on the bed, leaned closer, grabbed his hips for support, and covered his swollen penis with kisses. His breath quickened. His cock twitched. Changing what she did, she traced his shaft with teasing bites and long licks from bottom to top. When he was completely wet, she slipped the tip into her mouth. Holding him there, she reached around and grazed his bare ass with the tips of her fingers. His body quivered.

Making a circle around him with her finger and thumb, she pressed her lips on her fingers and lowered her mouth as far as she could, then continued the movement with her hand. Pulling her hand back up to her lips, she slid back to his tip, and then lowering her head and hand once again. Her fingers reached between his legs and stroked his testicles. “Like that?”

She glanced up, met his gaze, and smiled.

Using a light touch all the way through her coordinated stroke, she kept the pressure steady. His fingers wrapped in her hair as he pulled her closer, trying to get deeper into her.

Her speed and pressure increased as the rest of her fingers encircled his engorged shaft and mimicked the efforts of her lips. His hips bucked into her. His breaths came in short sharp pants and the look on his face said he was focused on the delicious delights her mouth and hand provided him.

Her left hand alternated from clawing his ass to caressing and squeezing his testicles.

With a groan of frustration, his knees buckled. “Stop.” She dragged her lips up the length of his cock, slipping off and then kissing the tip. She could taste he was near his climax.

Pete tucked his hands under her armpits and tossed her backward onto the bed. The mattress shook as he climbed on. He knelt and rested on his heels, taking a moment to admire her naked body. “You are beautiful.” His hands rubbed her nipples, enticing them to swell. He lowered his head and slipped the closest one into his mouth. His tongue swirled around it, making it wet and hard.

The touch of his tongue on her breast made her clit throb. A groan was all the response she could muster.

Read more of this incredible hot story F.L.E.S.H. on:

Daryl Devore lives in an in old farmhouse in Ontario, Canada, with her husband, cat, a large salt water aquarium full of fish and some ghosts. Her daughter is grown and has flown the nest. Daryl loves to take long walks up her quiet country road, or snow shoe across the back acres and in the summer, kayak along the St. Lawrence River. She has touched a moon rock, a mammoth and a meteorite. She's been deep in the ocean in a submarine, flew high over Niagara Falls in a helicopter and used the ladies room in a royal palace. Life's an adventure and Daryl's having fun living it.