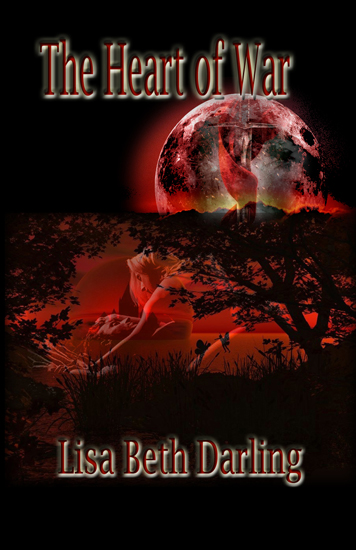 Inside the Heart of every Warrior breathes the Soul of a Hero–even within The Heart of War.

Meet Ares God of War, the greatest Warrior the world has ever known. He’s moody, grumpy, dominant, ravenously sexual, and above all, built like a Greek God. Suspected of killing his Daughter in-Law, Psyche, and long in exile from Olympus, the solitude of Ares’ island is interrupted when Magdalena MacLeod a brash and sometimes manipulative Fey washes up on Ares’ island after believing she’s been shipwrecked. It’s not mere fate that has brought the unlikely couple together yet it may be what tears them apart.

Branded with a golden chastity belt bearing the mark of Cernunnos, Celtic God of the Forest and Death, Alena has been on the run from her husband the Great Horned God for 200 years. When the Olympians discover her presence on Ares’ island, they send Apollo to the island while Ares is away with orders to bring her to Olympus. Diplomatically winding her way out of immediately going to Olympus, when Ares returns and with nowhere to turn, Alena strikes a bargain with the God of War–her virginity for his protection.

Ares sees a sweeter deal; her in his bed and himself back in his rightful place on Olympus even if it means turning Alena over to Zeus. After Alena proves herself to Ares in battle and his bed, the God of War must choose between his Divinely Dysfunctional Family, his pride, and Alena. Get lost in this sweeping dark saga battling Ancient Gods while falling in love with Ares God of War and Alena MacLeod. Ares and Alena share a love that will rock the world from the heights of Olympus to the Celtic moors, but will it be enough? Will love triumph, or will revenge and rage win the battle for the Heart of War?

The Heart of War contains scenes of graphic sex and violence. As such, this novel and the entire OF WAR Series is intended for MATURE AUDIENCES ONLY it is NOT recommended for the Faint of Heart.

Ares sighed deeply. “I don’t appreciate it when those around me lie. Want to try again?”

“No,” she stammered and pushed his hand away, hoping he’d put the vial back in the box. “I’d rather not answer your question. It’s…personal.” Alena’s bottom lip began to quiver and her eyes began to mist.

She didn’t have to go any further than that.

With a wave of his hand, the box and all its contents—including the vial—disappeared from the bed. He reached up to put his hand on the nape of her neck and brought her down to him. “You were going to drink it, weren’t you?”

She turned away from him with a deep frown. It wasn’t the first time she’d tried to take her own life and she doubted it would be the last. Like her attempts to commit suicide over the centuries, Jaakim hadn’t been the first to abuse her in such a way, but he had been the worst. The day she returned from being Jaakim’s little sex toy, still full of Mamba venom, she’d gone to the girls’ dorm, opened the footlocker and broken the seal on the vial. She drank it. Battered and broken, she’d crawled into her bed and waited to die. Alena was very sick for about a week but she was still breathing. Although they did have very long life spans, Feys were not Immortal. Alena was only half Fey. She never understood why no matter what she did, how hard she tried it just didn’t work. She always woke up the next day.

Without looking him, her gray eyes fixed on the fire burning in hearth instead, Alena spoke. “I just wanted it to be over. I was tired of being afraid all the time. What does any of this matter to you?”

Ares turned her face back to him to gaze into her watery eyes. Although he couldn’t yet say why, it did matter very much to him. “The taking of one’s own life is never the answer.” For a moment Ares sat there in her arms, taking in that sweet scent and feeling her warmth while wishing he’d killed Jaakim just a little slower.

“Because if you’re dead you can’t experience this,” Ares kissed her.

As their lips touched her fingers that had been dancing so delicately across his shoulders and upper back froze in place, flexed, and grabbed at the flesh below. Lowering the hand at her neck to her waist, he pulled her body down onto the bed. Alena let out a very sweet sigh as she slid right into the crook of his arm with her lips pressed to his. Her hands were finally allowed to run wild in the space between his neck and his chest. Even though she was afraid that once this started it might never stop, she couldn’t get enough of touching him. The heart in her chest raced like the wind, her lungs couldn’t get enough of the air around them, which had suddenly become hot, steamy. The scent of him, so deep and rich, every breath was intoxicating making her head light and dizzy, her body weak, and her soul cry out for more.

When his lips pulled away from hers only to land on her neck and suckle, the palm of his large hand covered her heaving breast over the thin material of the shirt. Alena pushed the shirt open under his hand so that there was nothing between them. His touch warm and although it was manly, it was also soft, especially for one who called himself a warrior and was always splitting so much wood. The feel of it over her hard nipple made her nails scrape along his back. Ares couldn’t wait to get his mouth around it; she cupped her hands to his face and brought him closer and then his tingling lips left her once more and made their way to their first destination of the evening. His mouth gently closed down over her ample breast and her back arched up off the hard stone to greet him. She tasted like heaven, sweeter than Nectar and more palatable than Ambrosia; he began to wonder what that bald space between her legs would taste like dancing on his tongue. However, there was no rush. They had the entire night. Apollo wouldn’t return until morning and by then it would be too late. Reaching down past that patiently waiting place between those too slender hips, he grasped the hem of the shirt and slowly pulled it upward, letting those thick fingers linger over that same waiting spot, finding it moist already before he brought the shirt up and over her head, laying her bare beside him.

She was a rare prize, Ares understood all of the reasons Cernunnos wanted her. She was beautiful. She was brazen. She was brave. She was passionate. Just what the Olympians wanted with her or what Eros had already done with her he didn’t know but he intended to find out. Not before he took all that she was offering to him—her body along with her heart. Not before she said that she was his.

The world around her began to spin and Alena could no longer tell up from down. It was getting hard to breath and even more difficult to tell where she ended and he began. Men had touched her before but none like this, none that made her want to explore, to surrender, to lose control. The space between her legs became misty, then steamy, then it sweltered as it swelled and prickled with life. “What are you doing to me?”

Ares didn’t know what he felt, why she filled his head with helium, making it so light he felt it would float off his shoulders and he would be glad for it. He didn’t know why what had turned in his favor as a simple barter between friends became so electric and heated. Then again he hadn’t destroyed that camp because someone defiled one of his whores long before he came along. Ares did it because he was so angry that Jaakim would dare to touch one like Alena that he couldn’t see straight long before Sha’Quanda finished the story.

“If we do this, you will protect me from them? From your Family?”

“Are we still bartering?”

With all of her rationale and reasoning fleeing swiftly Alena grasped for the last bits of both. In the end, he was Ares and Ares had a reputation that didn’t bode well for him. “If we do this, Cernunnos will know. He will send them after me.”

A barter it was. Fine. Ares always did like to get his payment up front. “Let him know. Let him come. I am not afraid.”

Staring into those deep smoldering eyes it was clear to see that no, he wasn’t. Why should he be? He was strong. He was powerful. He had the command of fire. He was a God, which put Ares on even footing with Cernunnos. “I thought you didn’t like virgins. Too much crying.”

Ares cradled his head between her breasts so he could listen to her heartbeat. It was strong and fast. He reveled in the feel of her hands running through his hair and down his back. No woman made him feel this way. He didn’t just want to penetrate her, he wanted to take his time and savor every inch of her. “I lied.”

Why didn’t that surprise her? After all he was Ares, what else should she have expected? “Kiss me again.” Alena couldn’t help herself. Ares wasn’t the best custodian she could think of to hold and protect her heart, but she couldn’t fight what she was feeling any longer. All she could do was surrender to him and the desire swelling within her.

“With pleasure,” Ares whispered, his full lips barely touching hers. When they pressed to hers Alena’s head lit up with electricity and the whole world vanished.

Visit Lisa Beth Darling’s site to purchase The Heart of War at http://www.moonsmusings.com and watch the Of War series trailer here https://www.youtube.com/watch?v=eowJWBrVB78

For more of Lisa’s links, find them at the end of her bio below!

You may also like...
Related Topics:Book excerpt, Erotica, Lisa Beth Darling, The Heart of War

A writer of Dark Adult Romance and several non-fiction books. My stories are not for the faint of heart they are for those who it like it dark and gritty.