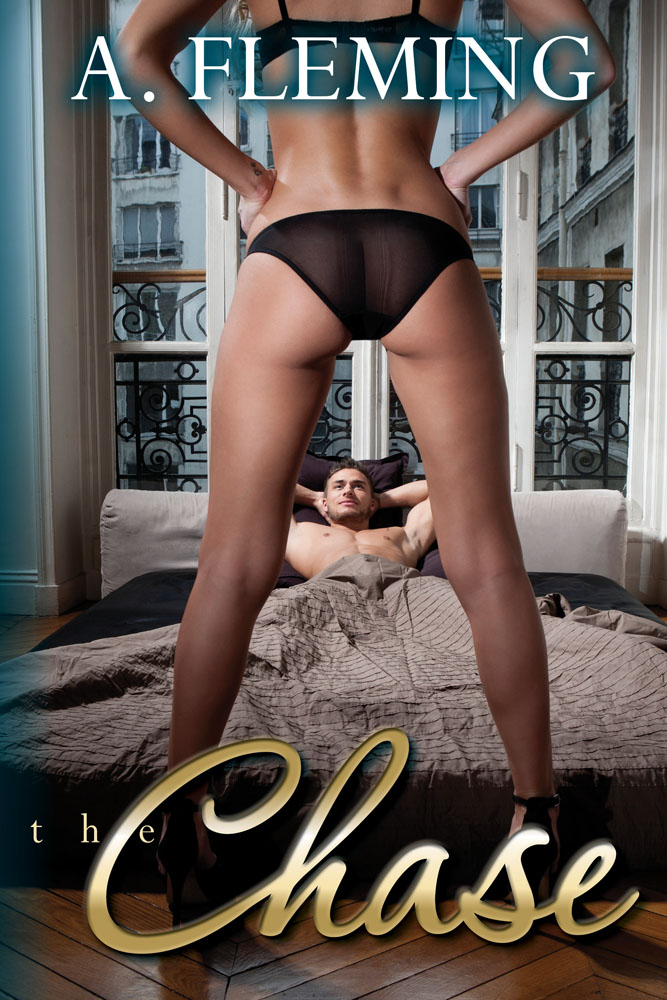 All bets are off in A. Fleming’s steamy debut, The Chase. The first in a four book series, this erotic novel gives readers a one-of-a-kind look into the lives of five men as they embark on adventures in dating, romance, marriage, and sex. Tony Dunbar, Will Rollins, JP, Greg Allen, and Chris Winters have been friends for ages. But they each find themselves at a crossroad when the married men struggle with the realities of monogamy as the single men attempt to traverse the complicated world of dating. While most members of the group seek a relationship full of love, commitment, and plenty of physical intimacy, the lure of trying to have it all sometimes proves to be just a bit too strong.

The truth is Jeanette has beautiful, ample breasts, and she does not mind flaunting her cleavage and of course Tony was tantalized by the view. Earlier in the week, he had called and reserved a table with a view of the bay and asked specifically for candles on the table for their dinner. Just sitting there across from Jeanette, he could hardly think about anything else other than how beautiful and sexy she looked. He wanted to make love to her so bad and with the conversation at dinner centered on romance and seduction, thinking about anything else was difficult. By the end of the meal, the only dessert under consideration was a serving of heated passion and desire. If anyone had looked into their eyes that night, they would have seen their burning desires and had a glimpse of the story of what was to come next.

Jeanette and Tony walked hand in hand to the front of the restaurant to wait on the valet to bring his car. Anyone that saw them could see the sparks flying and the heat rising as Tony kissed her gently on her cheek and lips. During the drive back to Jeanette’s house, they spoke very little but looked at each other with a sexual hunger in their eyes. As Tony drove, he reached over with his right hand and began to massage Jeanette’s thighs. The higher up her thigh he went, the more heat he felt. Jeanette used her soft hands to rub his painfully hard erection through his pants. He could tell by her naughty smile she was happy with what she found. They both knew they were highly aroused and could not wait for what was to come next. From the moment they walked through the door of Jeanette’s house, their inhibitions melted away.

As soon as the door was closed, Tony pushed Jeanette against the wall of the foyer as they French kissed. She grabbed his butt and pulled him to her tightly, feeling his hard, throbbing cock grind into her hot, clothing-covered sex. Jeanette ripped his shirt open and ran her fingers over his bare chest and abs, touching his body ever so erotically. He reached down to unzip and remove Jeanette’s slacks and realized she was panty less. The thought of her being this way all through dinner only heightened his state of arousal. Jeanette could not wait any longer, so she jumped into his arms, wrapping her legs around his waist while he carried her into the dining room and sat her down on the table. He bent down and slowly kissed her inner thighs, alternating from left to right until he reached her wet pussy, stopping only to stand and kiss her deeply again while he unbuckled his belt, unzipped, and dropped his pants to the floor. At that moment, Jeanette pulled him between her open legs and held on tightly as he entered her slowly, allowing her to adjust to his length. Once he was deep inside her, they made love like sex-starved animals until Jeanette’s body shook with a much-needed climax. After she calmed down, Tony helped her lay back on the table with her legs draped over his shoulders.

As he bent down, he slowly kissed his way up her thighs until he reached her throbbing clitoris. Tony slowly licked, kissed, and sucked her clit until she shuddered with another intense climax. After bringing Jeanette to such heights of passion, he was crazed with desire and needed release himself, so he sat in one of the armless dining room chairs and pulled Jeanette down into his lap facing him and onto his painfully hard shaft. Jeanette took control while riding Tony and enjoyed the fullness of his cock inside her. Jeanette rode his cock until he exploded inside her hot, wet, throbbing vagina. After they were both totally exhausted, they found their way to her bedroom and, snuggled together, falling into a deep, satisfying sleep. Jeanette’s bedroom has a view of the hills facing east, so any sunrise is always magical.

The next morning, Tony got up early enough to fix breakfast for Jeanette while she was still asleep. He placed a plate with an omelet, toast, and a cup of coffee on a serving tray and took it back to her bedroom. As the sun was beginning to rise, it was peeking through the curtains of the bedroom. He looked at Jeanette as she slept and admired her loveliness. The sunlight cast a light just above her head on the headboard, highlighting her beauty. After placing the tray on the nightstand, he bent over and gently kissed her on the forehead. Jeanette, feeling the kiss, woke up and smiled at seeing him standing over her. He looked at her and asked, “Are you hungry?”

With a very naughty smile, Jeanette replied, “Not for food, I want you to fuck me—now!” And with that she reached up and pulled him down on top of her for a kiss. This was all the encouragement he needed; his hands were all over her body, gently touching her wet pussy, arousing her even more. Jeanette looked at him with lust in her eyes as he positioned himself between her splayed legs. Jeanette reached for his hard cock and guided him inside her very wet pussy for what was to be a hot and fast morning fuck. That night for Tony was charmed, and he wanted more of the same—regularly. From all indications, Jeanette wanted more of the same too, and she soon spent more than a few nights at his condo.

Visit Alistair Fleming’s site to purchase The Chase at www.alistairflemeing.com

You may also like...
Related Topics:Alistair Fleming, Erotica, The Chase