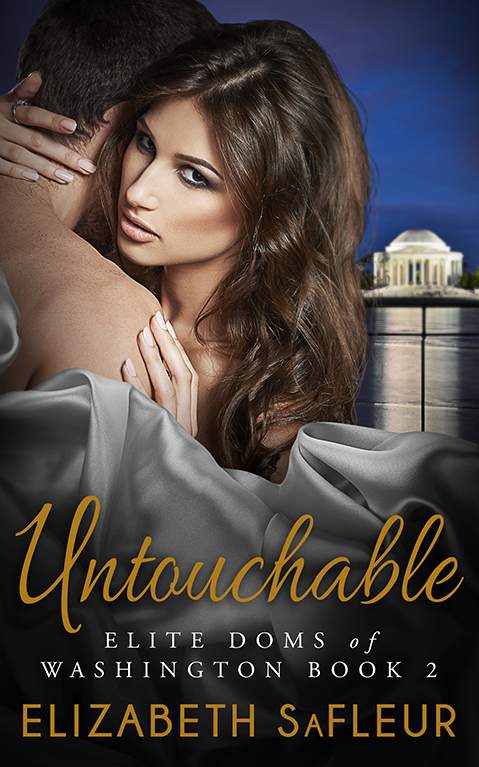 Carson herded London toward the private rooms. She stopped short when they reached a gothic-arched doorway.

“Where are we going?” she asked.

“Then you don’t have to.” He dropped his hold on her waist.

She let Carson pull her through the massive door, held open by a bodyguard. He moved them down an expansive hallway. Only after ushering her inside the last door at the end did he let go of her elbow. She immediately crossed her arms.

“Yes, so I can’t stay long.” She worked her bottom lip and shuffled her weight from foot to foot. Her eyes also darted to the bed in the corner. Perhaps she thought he’d take her right away? She knew his identity. She should know he was committed to due diligence. And he had to know why she was here—the last place on earth he’d expect London Chantelle.

He sat in one of two cushioned chairs set before a lit fireplace. He appreciated her luscious curves, beautifully illuminated by the amber glow of the low fire.

“Sit.” He beckoned her to join him.

“Sit.” The commanding tones of a Dom brought the expected result. As she lowered herself into the chair, her ponytail licked one shoulder. “Your hair is beautiful in this light,” he said. “More golden brown than I noticed before.”

Her mouth dropped to an “O” in alarm, and she leapt from her seat.

“Sit. Down.” He pointed to the chair.

“Please.” Her hazel eyes implored lenience, and her tone of voice surprised him. He liked the beseeching quality. It was quite a departure from her customary unadulterated demand.

“Please what? You thought a simple mask and change of clothing meant I wouldn’t recognize you?”

Before she could complete two steps, he’d risen from his chair and laid his hand on her shoulder. She stopped. He pressed his torso against her back, sending her firm ass into his crotch. He decided to like her stiletto boots. He was a tall man and they made her the perfect height. He waited to see if she’d object, at which point he’d back off. She didn’t move.

Carson pulled off the elastic holding her hair captive. A curtain of gold-laced chestnut silk cascaded free. He brushed her mane to one side and bared her shoulder. “That’s better.”

Her breathing sped up. “You said just talking.”

“Still, sweetness.” He inhaled her scent of Ivory soap and cinnamon Christmas cookies before stepping backward. “We are talking.”

He liked how her emotions turned in an instant. She’d test his abilities to direct her psychology in a scene. He nearly laughed at himself. How quickly I have her bound and pleasured in my mind. “There. Now that’s a start. I rather like you begging me.”

And there goes that chin. “We’ll see.” He took another step back. His instincts told him she wouldn’t bolt.

“Take a seat, London.” Carson returned to his chair. “When you do, hands in your lap. After you listen to me you can decide if you wish to leave. It will be your choice.”

London hesitated, then nestled her behind onto the chair opposite him. She placed her hands in her lap. The thumb of one hand worked the palm of the other.

“Take off your mask. Show me your pretty face.”

London took a deep breath as her elegant fingers slipped off her disguise, pulling the fastening ribbon through her perfect hair. He wanted to capture her cheeks in his hands. He’d rub off the mask indents and erase the worry imprinted on her forehead.

“How long have you been without a master?” he asked.

“That’s a shame. I’m good at business.” His mouth broke into a smile at the thought of bending her over her desk, papers sticking to her bared breasts, pens falling to the floor. He’d smack her ass with that leather portfolio she carried around like a shield. He wouldn’t stop until her engraved initials imprinted her skin.

“Why did you bring me here?” she whispered.

She flinched at his final word. “What do you want, Carson?”

What I want. Did it matter? He’d given up what he wanted long ago—a spirited submissive who matched his desires. Someone who might actually stick with him and not drop him the minute a better offer came through. He didn’t allow himself to think finding such a woman was possible anymore.

“Time. Willingness. Pleasure.” Carson folded his hands and laid his chin on his knuckles. “Now, I want to know what you want.”

Carson raised an eyebrow. “Toying with me will not get you anywhere, sweetness.”

“Isn’t that what you are doing with me?”

“Then what?” she whispered after long minutes.

“Patience will be your first lesson tonight. Then I’ll consider you.”

“Consider me?” She gave him a hardened, fuck-off look.

He let a few seconds tick by. Then he stood. “If you won’t tell me why you’re here, what you seek, then I can’t help.”

“You must answer my questions when I ask them. No delay. It’s for your safety and mine.”

Her lips pursed, her signal she realized she was losing. Her sassiness had its usual alluring appeal—futile, but adorable. She licked her bottom lip, the subtle move urging him forward.

“What is your safeword?” he asked.

“Excuse me? A-a scene. With you? You’re a client. If anything ever got back—”

“Then we would both lose. And I don’t lose.”

“No, You take what you want and damn the consequences.”

“London.” Carson walked toward her and she backed around the chair. “What are you afraid of? Afraid you might get what you want? Experience what you’ve longed for?”

She let out a huff, but continued to retreat as Carson advanced. He sent her in a backward circle until she closed in on the canopied bed. Yes, most definitely submissive. The urge to discover how deep her desires ran raged through him like a brushfire.

“How would you know what I long for?” Her haughty chin jutted out.

“Why?” She’d backed up until she connected with the bedpost.

“Fair question. And one I’ll answer. Given you and I dance well together at the boardroom table, why wouldn’t we here? Had I known your proclivities I might have offered. Why didn’t you come to me before?” How had he missed her signs?

Now he was puzzled. “No, I don’t. You sometimes . . . irritate, but I could never hate you. Surely you noticed my tendencies.”

“Being a bully in a boardroom does not make you a Dominant I’d be interested in.”

“Ouch, London. That hurt.” Carson slapped his chest above his heart but kept his face stony.

“I didn’t think you could feel pain.”

“Everyone feels pain.” Her lips parted when he closed the last inch of distance between them. His thighs touched hers, and he softened his voice. “It pleases me you’re here. There’s no use in fighting this chemistry.” Carson hooked a thumb on his waistband. “One weekend.”

“What will you do with your harem?”

He unbuckled his belt. “Your second lesson. Don’t force discipline with a smart mouth.”

“I don’t have that kind of time.” She raised her impertinent jawline—again.

“Not enough time to learn discipline or not enough time, in general?” The loud rasp of leather yanked through his belt loops sent her attention to his torso.

“What are you doing?” Her panicked gaze shot to his face.

“I am wholly disinterested in being collared.”

“One weekend, London.” He grasped one of her hips with his free hand. “If you’re disappointed at any time, you can walk. I’ll never speak of it again. Our work together will go unaffected. No one—and I mean no one—but us will know.”

“Would you put that in writing?” Her eyes filled with mischief.

Priceless. London lured him toward a lightning storm. He could play. Hell, nothing appealed in the moment more than a weekend playing with London. Yes, this is what he wanted. Now he needed to know if she was willing.

“I’ll do one better.” He snaked the belt around her waist until the leather rested against her hips.

“You could never be a notch, London Chantelle. You’re the whole belt, sugar.”

Her face softened, and the playfulness in her eyes died. He recognized the deliberation behind them, the wonder if she’d be safe, here and at work. London needn’t have worried. She might get scared, but mutual satisfaction was the only way his brand of sexual fulfillment worked.

“Say yes or no.” He pressed his torso to her corseted body, the last space between her body and his obliterated. “But say yes.”

“What will happen if I say yes?”

“What you want.  What you’ve probably always wanted.”

Her eyes misted with a surprising vulnerability. “Yes.”

Don’t wait further to find out what happens next.  Purchase the rest of the book here: