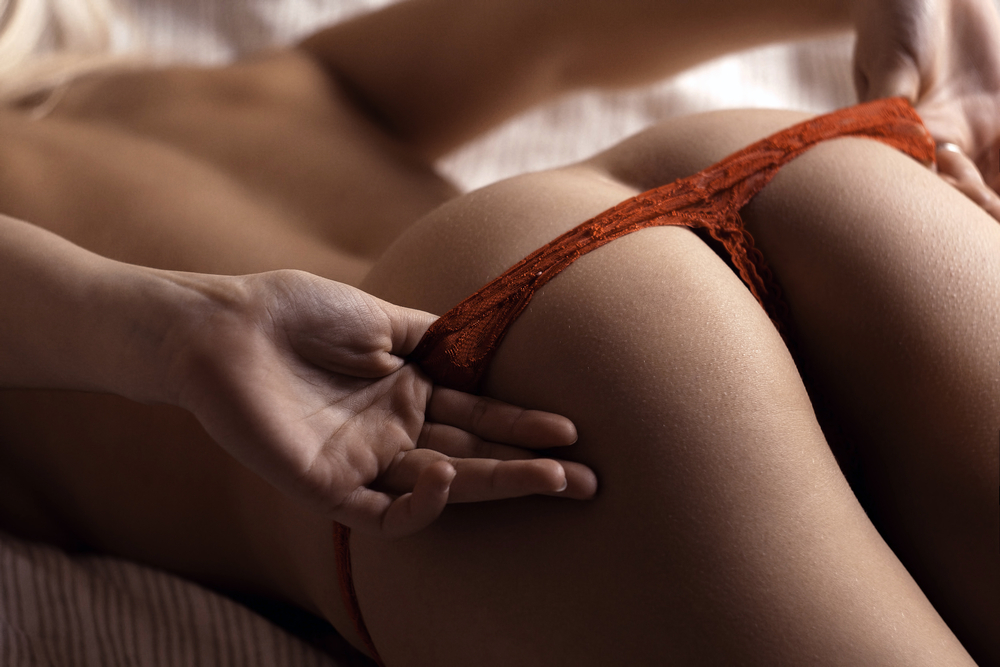 Photo: Shutterstock
Prev2 of 2Next
Use your ← → (arrow) keys to browse

I shifted myself between his legs and begun licking his balls.  Ed always had a strong sense of hygiene and he was well shaven below.  I knew how much he enjoyed me sucking on his balls while I stroked his dick.  Normally, my other hand will play around with his ass but tonight, I was positioning The Cone in-line with my wet pussy and finding the button to switch it on.  Put a horny lady with a new sex toy she has never even read about and you get five minutes of fiddling and adjusting before getting the right position.  And all this while sucking and licking a dick that is already dripping with pre-cum.  In a squatting position with The Cone vibrating away, I began taking Ed’s dick deeper into my mouth.  Unlike other vibrators such as the rabbit where I need to use one hand to hold, The Cone sits perfectly on the floor and vibrates (a wonderful hand’s free device).  This allowed my hands to be free to rub Ed’s balls and playfully run my fingers around his ass.  I could tell he was enjoying it as he was moaning continuously and his hands were starting to grab my hair tighter than before, pushing my head against him.  My tongue started to run from one testicle to the other, making sounds as I sucked softly on each for a two seconds while my tongue played with it.  Tilting his dick, I moved my tongue onto the tip and began licking the tip in circles, tasting the pre-cum as it oozed out.  My head bobbed as I sucked harder and deeper on his dick.

My hands were starting to get used to finding the buttons on The Cone and changing the vibration modes.  Moving myself up and down, according to the rhythm of its vibrations, I began riding it harder and harder as my pussy juices flowed freely down the tip and along its sides onto my carpeted floor.  I could feel my pussy tighten as the tip of The Cone entered and vibrated while I moved myself occasionally to rub my clit against the tip.  In the heat of enjoying myself, I began to realise that I was slacking off with my other job.  That of using my mouth to satisfy Ed’s dick.

With no intention of giving a sloppy blow job, I removed my mouth from his dick.  “Fuck me from behind,” I said in gasping breaths, with my new best friend humming under me.  Not wanting to lose touch with The Cone, I moved myself slowly into The Cone Dog position.  My elbows supporting my body and my stomach against the floor, I placed my wet clit on the vibrating tip and arched my pussy upwards to receive Ed.  Ed had no trouble putting his dick into my super wet hole.  As he grabbed my hips and thrusted slowly, I could feel his dick move in and out.  I knew I wouldn’t last long today, not with The Cone surprising me with every second.  In my prone position, not being able to reach behind to adjust the button, I closed my eyes and laid on the floor, feeling the vibrations against my pussy and Ed’s dick all at once.  “Fucked me harder, I don’t think I can last too long tonight,” I ordered Ed.

Ed started to quicken his pace.  His thrusting became more purposeful .  I was vibrating and electric currents were running through my entire sweaty body.  I felt filled to the extreme, my boobs bouncing up and down with every thrust.  The Cone’s vibrations complemented Ed’s dick made me so weak yet damn good.  I couldn’t take it anymore.  Wave after wave of orgasm hit me and my whole body shuddered as I collapsed against the floor in my juices, eyes glazed.  My aching pussy rested against The Cone’s vibrations, moving to its tune, like a slave to its master.  I didn’t know when Ed came as my body was numb from the multiple orgasms I just enjoyed.  In fact, at that very moment, I didn’t even care if he came.  All I remembered was him lying down beside me on the floor panting.  After what seemed like ages, I mustered enough strength to get up.  The entire Cone was wet with my pussy juice.  Not a single spot was dry.  The smell of sex and cum filled the air.