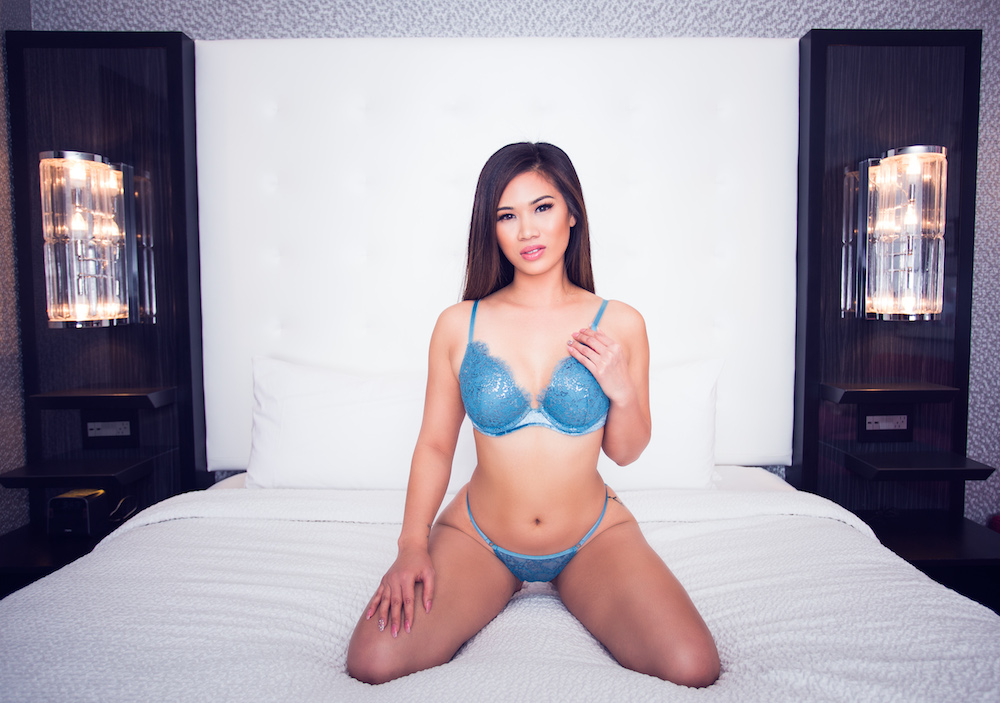 My name’s Natasha. I’m a Leo. I was born and raised in San Jose, California. I’m a first generation Asian-American that’s half-Vietnamese and half-Filipino. I grew up watching America’s Next Top Model & Project Runway as a teenager. My desire to be a part of that world led me to pursue a career in fashion first!

I have two associate’s degrees in Fashion Design & Liberal Arts. I also have two fashion styling certificates from the School of Style & Elite Fashion Academy where I trained in San Francisco, Los Angeles, and New York.

Eventually, I wanted to be a model behind the camera instead of a wardrobe stylist. I’m really glad I decided to chase my dreams as a glamour and import model, as it’s taken me all over the world and I feel like I can truly be myself! 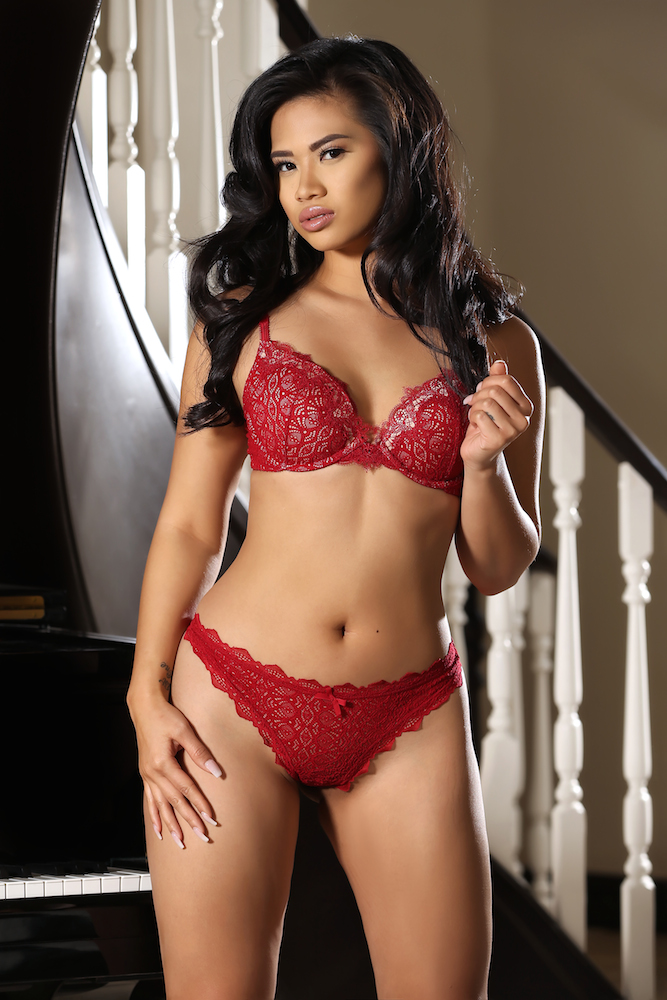 How did you get started into being a model?

When I was in high school, my friend used me for her photo class’s portrait assignment. I was maybe 15 or 16 years old.

We took a lot of photos using natural light during “golden hour” and some with me walking through the leaves during fall season. They’re very innocent photos compared to now (laughs). You can see the rawness and unrefined talent in the pics.

A lot can change in ten years! My look, style, and demeanour are much more polished. So for new models not born in entertainment or money; be patient and keep working on your portfolio. You’ll figure it out. 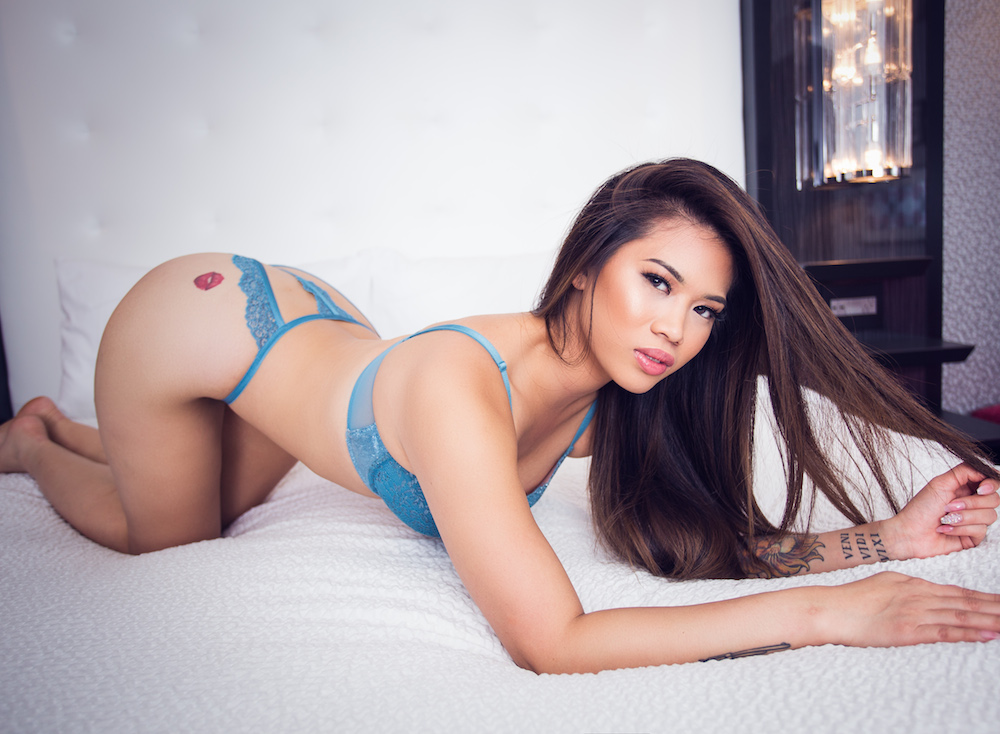 What do you love about being a model and is it a lot harder than it looks?

Modeling has brought great joy and purpose into my life. I think others might underestimate my career choice or the lack of stability a modeling career can hold, but I’ve really lived quite an interesting life.

I love how every job is different. It’s given me something to look forward to in the future. It challenges me to adapt to the situation and evolve myself. By making my own schedule instead of having a typical routine 9-5, it gives me freedom to work as much as I want or take time towards other interests – typically my health/training, hobbies , friends and family.

I love how modeling has taken me around the world. I’ve been to Fiji, South Africa, Thailand and other countries through modeling! I’ve done ring girl, promo gigs, and even had my own model feature while working around the US. I’m really grateful to experience that. As a kid, I used to read about other people’s adventures because I wasn’t well off and I had a hard time making friends… but modeling has brought my own adventures and friends! I’ve witnessed some beautiful and fun moments that wouldn’t have been possible if I wasn’t a model. 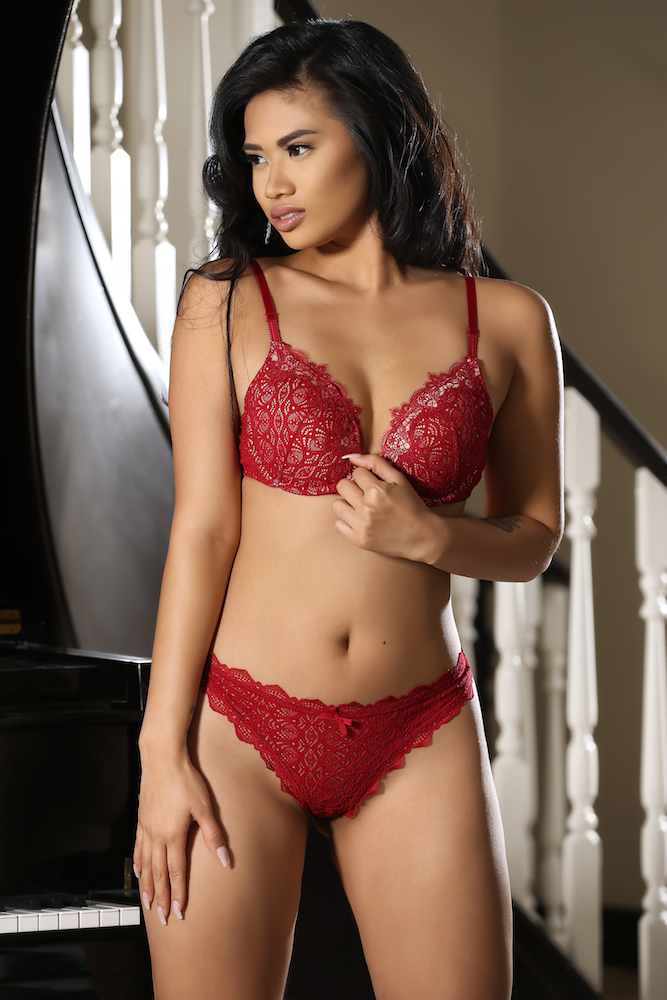 But the thing I love the most about modeling, is it makes me happy when I see that people genuinely enjoy my work.

I’m no doctor, but I can make people smile. I get such nice feedback when I go to the import shows. I’m glad my work has brought something positive to the world. Growing up in Asian culture, positive reinforcement such as compliments or talking about your feelings isn’t a thing… so it’s nice to feel appreciated and be good at something.

Well, of course there’s a lot of pressure to maintain how you look… comes with the territory (laughs).

Sometimes people can be critical about your look– and I’ve learned to be kind to myself.

I’m bi-racial and exotic looking. I don’t necessarily fit a cookie-cutter Asian look. My skin isn’t that dark, but it’s dark to some Asian cultures. I have a curvy figure and bottom. I always wished I was more petite because I’d get made fun of… now the slim thick/hourglass figure is in (laughs). It can be stressful when there’s a lot of pressure to be a certain look, but that’s just the norm of the industry.

Some people will love your look.. and some won’t (laughs).

By far the worst part of modeling is when I’ve been put in awkward situations or when I’m dealing with sleazebags. And the strange photo shoot requests… eww..

There are some shady people in entertainment! People definitely take advantage of young models. You have to learn how to navigate the politics of entertainment and hold your own ground. Whether you’re a freelance or agency model, that’s one of the hardest things with being a model is the sleazebags. Also, photographers that don’t return images or manipulate girls into drinking, pressuring them to do things to get photos, posing overly provocative photos are scumbags to the industry!! A fashion photographer asked if he could do a nude trade shoot…. for free. I told him absolutely not. Yeah… some people are just cheap and gross…. (laughs). 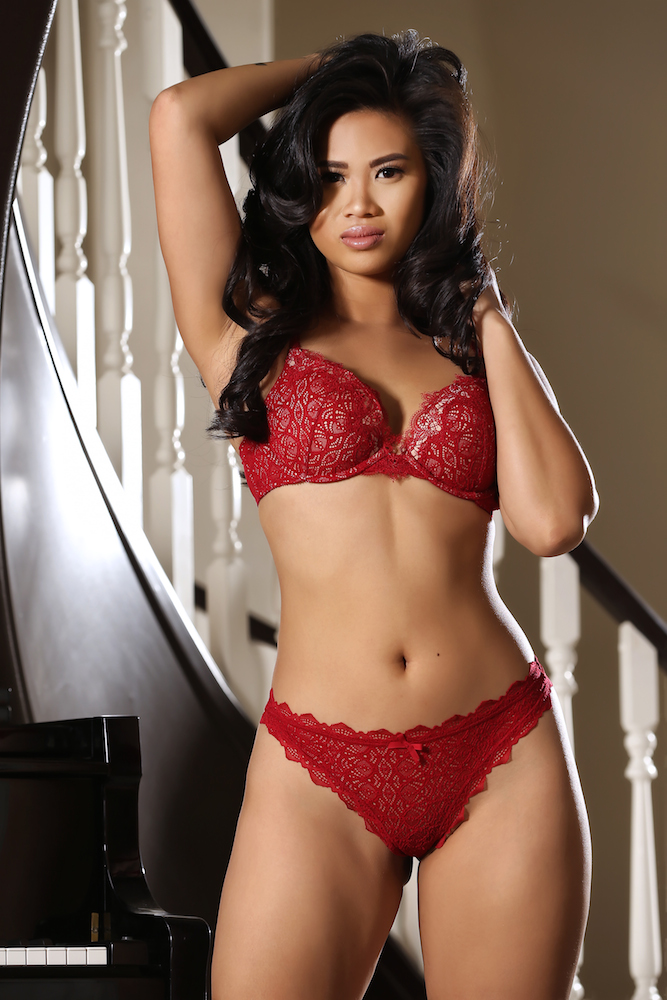 Which is a memorable or unforgettable event or photoshoot you have done before?

I’m supposed to just give one? (laughs) Hmm… there’s so many “unforgettable” shoots.

When I first started modeling, I was really excited to work with these pro skaters… I taught myself how to skate at 16 so ya… I was super stoked! I wasn’t really used to being around celebrities back then… I was definitely brand new.

Louie Barletta and Roger Bagley are such nice people to work with… I’m glad they were professional (not some gross sleazebags) and didn’t scare me off from the entertainment industry (laughs).

Oh, a really funny and memorable shoot was when I did this one in Vegas. It was a typical lingerie shoot… except one of the models was not typical… SHE HAD A HOUSE ARREST BRACELET ON. She proceeded to talk about how she crashed into five cars a month or two before she had the bracelet. And she that was her second or third DUI? Like whoa homegirl…. TMI! 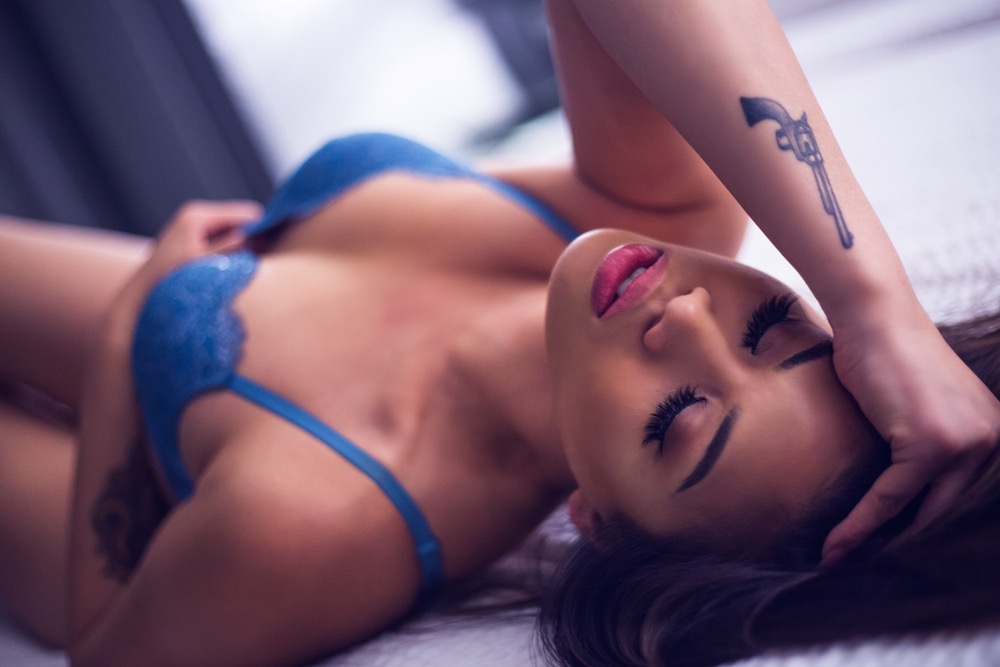 Do you have any quotes or mottos that you always use regularly?

I guess I don’t really use a quote or motto regularly, but I refer to literary posts philosophically. I have a few tattoos on me that go along with my attitude towards life.

“Veni Vidi Vixi” is poem by French writer Victor Hugo written after the death of his daughter Leopoldine. She was 19 years old at the time of her death. I guess you could say they’re kinda like scars instead of tattoos.

I also believe in the law of attraction to manifest the life you want. Under the sunflowers tab in my Instagram, I post about it and other philosophies I feel deeply about. 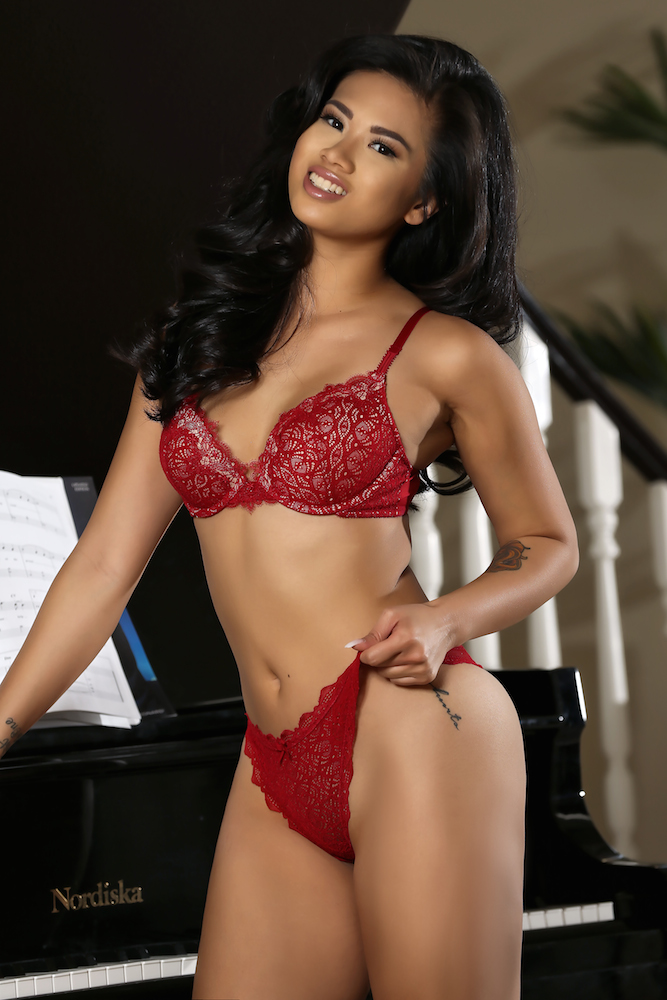 Where have you always wanted to travel to but have yet to find the time for it?

A world tour would be the dream… I’d start with an Asia tour (laughs). My bucket list includes doing a photo shoot in traditional clothing in my father’s land (Vietnam) and mother’s land (Philippines). 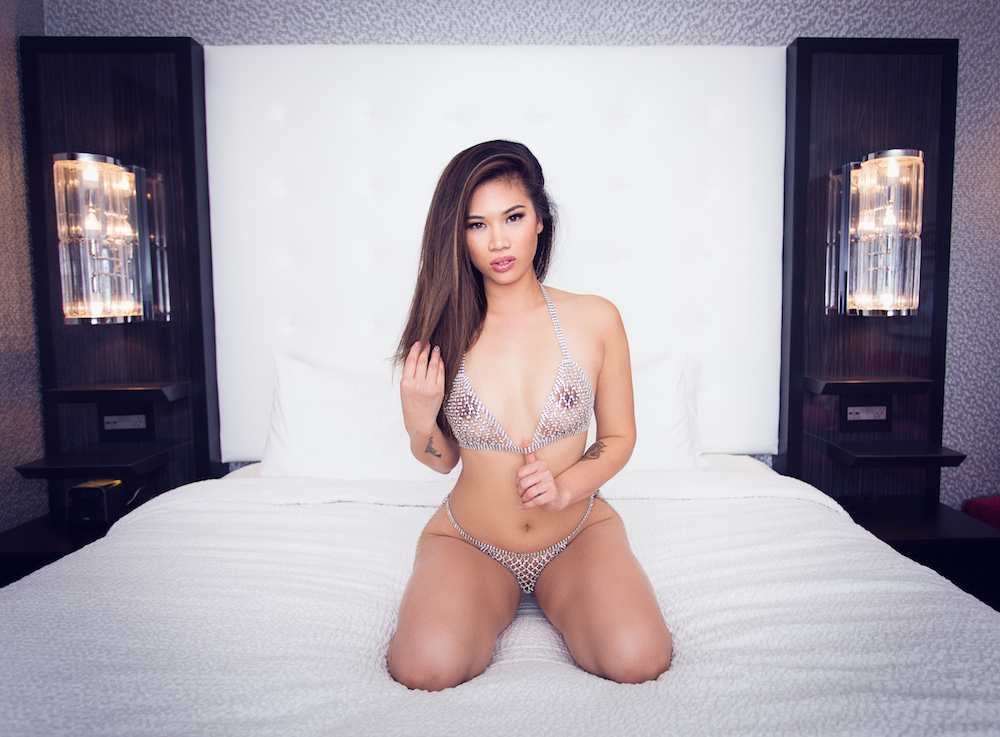 If you could learn anything, what will it be?

I wish I was fluent in many languages. Spoken and written language helps connect with others stronger than body language. I have a few language apps and I love watching foreign films… so I’m trying!

As far as my knowledge on languages goes…

My primary language is American English.

Japanese would be my second language since I taught myself Hiragana when I was 11/12. I’m a huge anime nerd so I try my best to sing the anime songs in Japanese (laughs). I’m pretty sure I can do Ranma karaoke version (laughs).

Third language is French. I took it in high school. I know some slang and can read but I can’t speak on a conversational level. You can also find me in a French rapper’s video, so that’s kind of a good reason to know some français (laughs).

If you want some thing romantic to say to your bf/gf, tell them “Envie de toi! Je t’aime et tu me manques beaucoup! Bisous.”

I wish I could talk in Vietnamese since there’s a big community in San Jose.  I get a lot of slack for not understanding and looking Vietnamese enough (but I’m biracial so I’ll never look full). Vietnam is a homogeneous country where it’s a big deal in the community to not understand the language or look “Vietnamese”. My mom actually put me in Vietnamese school, but it was hard… like learning and fitting in with other kids was no bueno. It’s just such a hard language to learn cause it has a combination of Chinese and French influence.

I don’t feel as pressured to learn Tagalog or Bisaya (my mom’s dialect) as there’s not many Filipinos in my area. The national language in Philippines is Tagalog and English, so I’m gucci (laughs). I feel there’s more of ethnic diversity and acceptance since Filipinos have many different looks but most notable are the Chinita, Mestiza, and Morena/Kayumangi look. I fall under the Chinita category.

If I was a genius, I’d learn it out of respect for my mother. I think it would also be useful to know some Chinese, Korean, and Spanish. 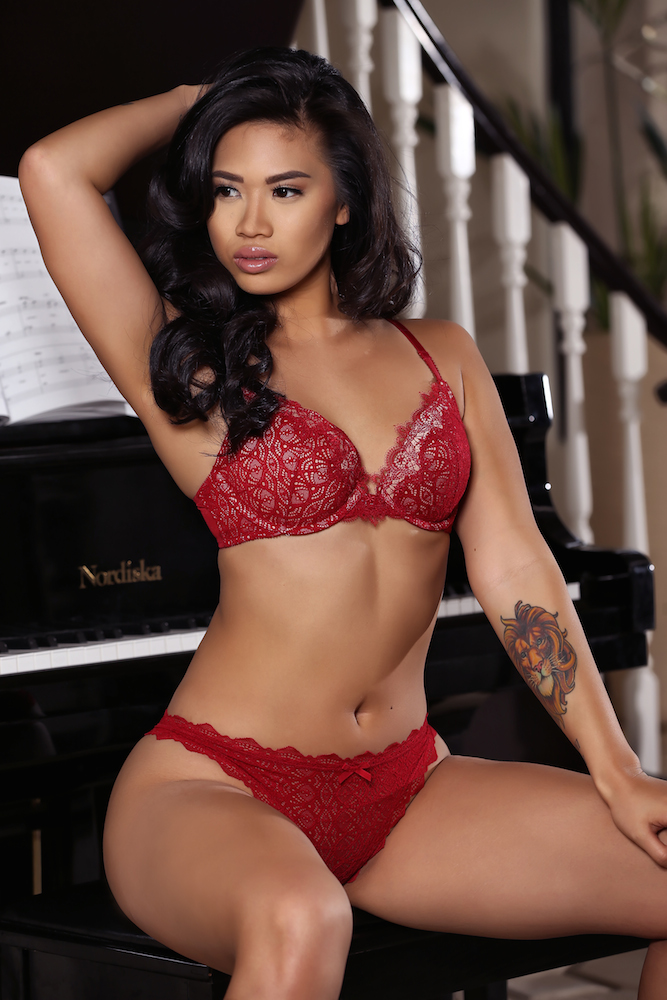 What is a lame or funny attempt a guy has tried to know you?

A really funny time a guy has tried to get to know me was when I posted a Facebook status about how hard it is to cut a pineapple.

He then solo chain commented three times in a row about how he wish he lived near me and would cut my pineapples for me. And then he ended it with a fart joke about cutting cheese (laughs). 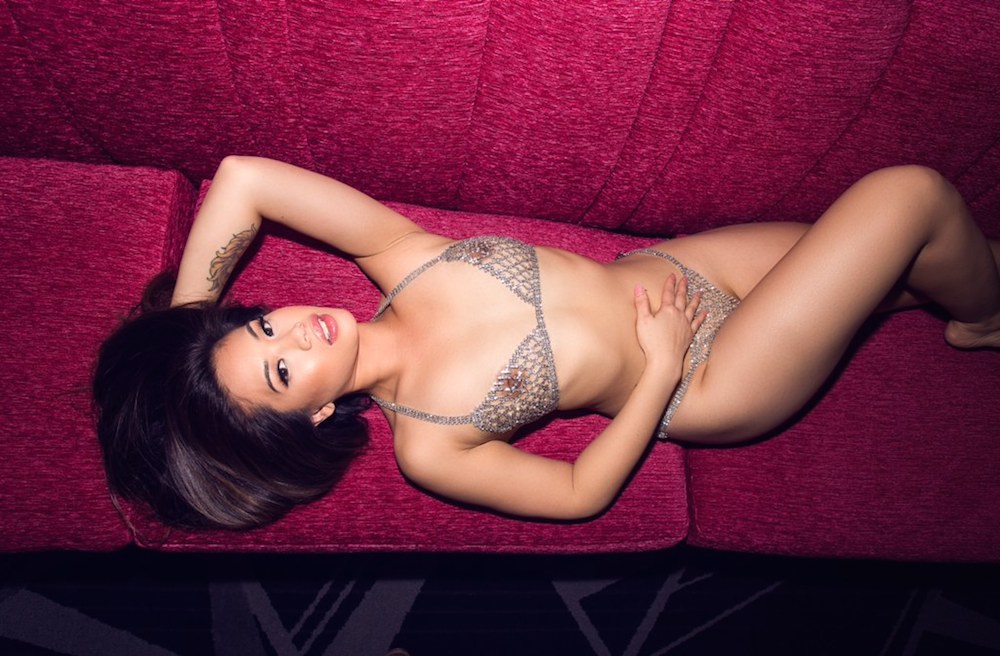 Thank you for taking the time to answer our questions Natasha. One question before we end, how do you define “sexy”?

I find it very “sexy” when you don’t have to talk about something – you just do it. Self-confidence without all that extra fluff. When your work speaks for itself, and you reach that moment when you no longer have to introduce yourself. That’s sexy.

People that are beautiful, fun, kind, and rich don’t have to always say they are because that’s just who they are. I strive to be around people like that, which falls into the principles of law and attraction.

Don’t talk about it, just be about it!