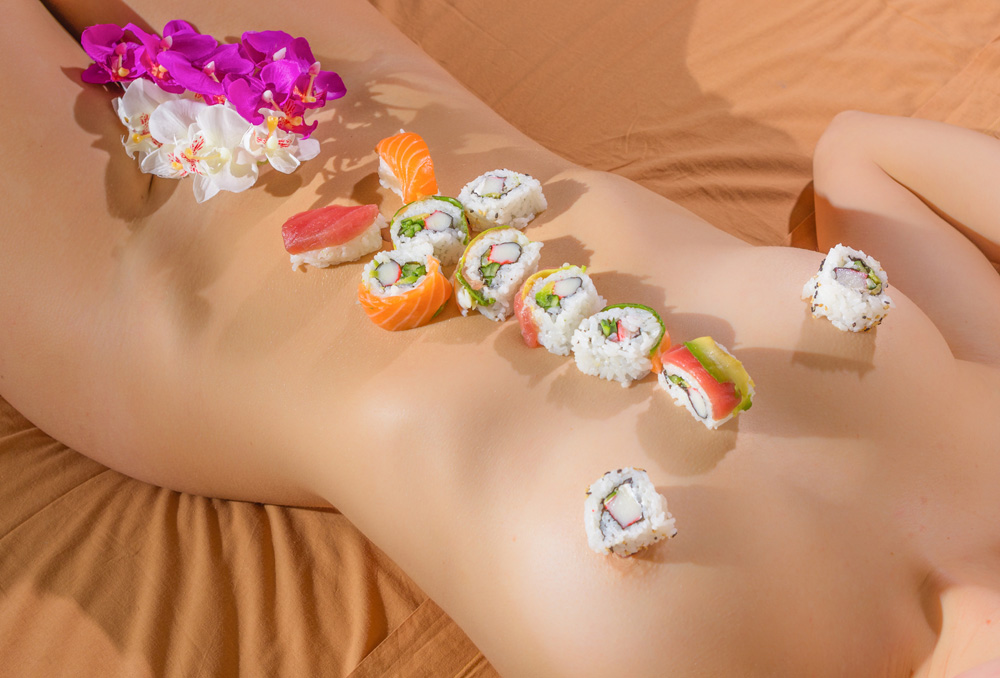 Perhaps like some of you, I had never heard of nyotaimori (aka eating sushi off a naked woman) until very recently. The feminist side of me was like WTF, while the exhibitionist side of me was definitely curious (and kind of into it). I wanted to learn more about nyotaimori but I didn’t just want to just read about it—I wanted to do it. So I decided that I would host a body sushi night, with myself as the “female platter.” I got some friends together to try on this nyotaimori for size … literally.

But before we start, you may be curious about where the hell did this sexy, fishy practice came from.

Nyotaimori, in Japanese roughly translates to “female body presentation” and is the (sometimes fetishized) practice of eating sushi from the naked body of a woman. Sounds steamy right? Supposedly, the art of nyotaimori was a subculture of the geishas during the Samurai era. Geishas would host a celebratory meal for the Samurai warriors after they returned home from a victorious battle; the meal was served on the geisha’s bodies. They are supposed to stay still and silent as the men enjoy their victory feast.

Nyotaimori is no longer an exclusive Japanese practice; it has since become more Westernized and popular in the U.S. In present day, nyotaimori seems to be most common in two spheres: a unique catering experience and as a fetishized practice within couples and group sex. Several catering companies, like those in Los Angeles and Miami have created thriving businesses off of this idea of body sushi. It’s titillating to see a beautiful naked model while stuffing your face with a shrimp tempura roll. Personally, I would appreciate nyotaimori in a more private setting where some sort of sexual play may or may not be taking place after the meal.

I was fairly selective in who I invited to participate in this sushi extravaganza. I didn’t feel comfortable including some of my male friends, some of whom are partners of my close girlfriends. I was choosy about who I invited because I didn’t want to feel objectified by the guys and I believed I would feel less ogled by my female friends. I know that this is a big assumption on my part of my male friends; maybe they all would have been respectful and wouldn’t have made comments about my tit size or new tattoo. I wanted this experience to be more about enjoying the food and company while trying my best to adhere to the nyotaimori etiquette and wanted it to be less about sneaking peeks of my boobs.

After I decided it was a ladies only event, I had to plan out the sushi menu. I purchased several sushi rolls but had to accommodate a few of my guests who don’t like sushi or fish. For those guests, my friends and I made candy and fruit sushi instead using things like gummy fish and worm candy with fruit strips and rice krispie treats. It took the equivalent of five rolls of sushi to cover most of me and we only made enough for one course!

Typically during a nyotaimori experience, the model or “platter” is not supposed to move and must remain silent for hours. She is supposed to lay still as others replenish her body with sushi; she can only move when the meal is over. It was very difficult to keep still and to keep myself from laughing and talking with my guests. We did lose a few pieces of sushi due to a case of the giggles.

After the night was over, stomachs were satiated and my clothes were back on, I chatted with my friends about their experience. The general consensus was that it was fun but it was a lot of work and would especially be a lot of work to do with or for a partner. None of them found the experience to be erotic but that is likely because some of them dislike sushi and/or aren’t attracted to women (the two major factors of nyotaimori). Had their partners been lying on the floor decoratively covered with pizza slices, they may have thought differently!

As for me, the “platter”, I had a lot of fun! It was rousing to lay there naked on display while one of my guests plated the sushi on me. I didn’t feel objectified—I felt sexy. I also liked feeling a bit out of control when it was time to plate the sushi. It was out of my hands and all I could do was lay there and trust that all would go to plan; the power dynamic between me as the “platter” and my guests was more palpable than I thought it would be and I liked it. For these reasons, I can see why body sushi can be so erotic for some; you are a piece of pleasurable, beautiful art that first can satisfy the stomach and then the heart.

Eat your heart out friends but save room for the California roll.

Nicole Nelson is currently in school obtaining her Masters of Social Work (MSW) from Smith College with a focus on LGBTQ issues and couples/marriage therapy. Nicole hopes to become a certified sex therapist to continue educating clients and helping people advocate for and embrace their sexuality. Read the rest of her profile below and the links to follow her!