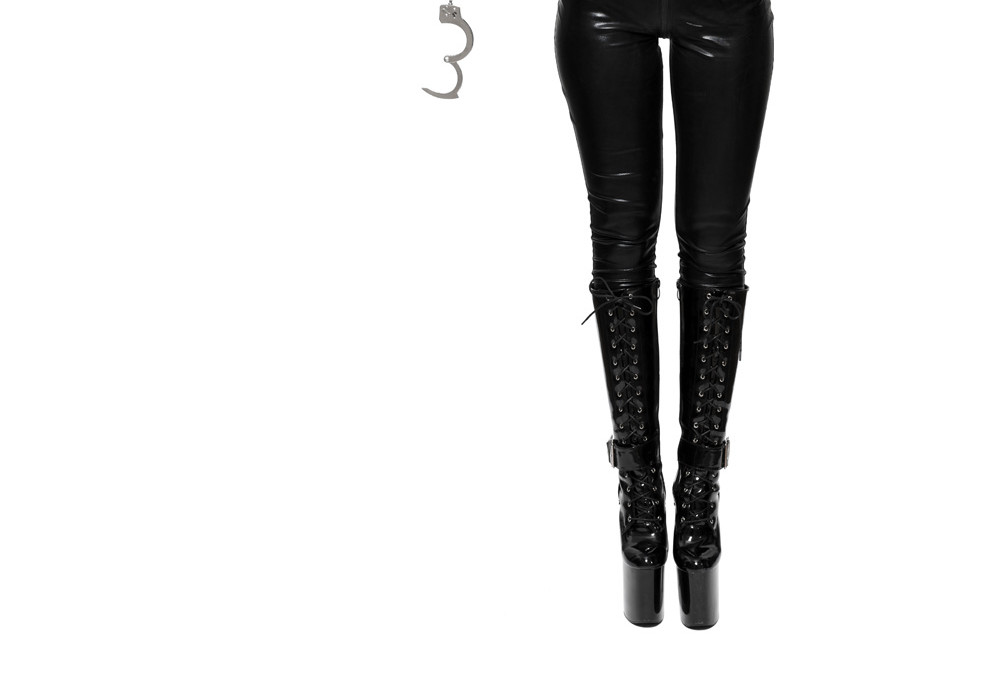 The latest media sensation of Great Britain is The Gimp Man of Essex, a mysterious guy appearing all over the namesake county north-east of London… clad in black rubber from head to toe. The habit of calling full-body latex ensembles ‘gimp suits’ comes from the 1994 movie Pulp fiction, but this longtime staple of fetish fashion is around since the late Fifties. Fans love the feeling of total enclosure, the scent of rubber and the anonymity, helping them into a head space completely removed from daily life where they feel like pure sexual beings – and behave accordingly.

The featureless face hoods can feel pretty unsettling to others however. The same lack of identity that makes easier to see and treat those who dons them just as sex dolls instead of complete persons hooks into our primordial fears of isolation and detachment. Faceless people are scary, and this is why they frequently appear as creepy villains in horror movies, such as American horror story or The collector. So, why is this man showing up dressed like that?

The real answer is obvious: he is an exhibitionist who enjoys the attention received by his shiny setup. That is only his own business, however. In fact, he has another explanation – and a very nice one. The Gimp Man of Essex is collecting charity: he donates one pound for each photo with him posted on his Facebook page. The money goes to Colchester Mind, a local association helping distressed people – especially those suffering of mental health conditions – to reintegrate into society. A very noble effort, that can only be explained by the man himself.

«My family doesn’t know about this. I started in June 2013 and I don’t go out during school holidays or weekends, as I don’t want to scare anyone» he says. «I am adult enough to realize people look at negatives in everything: some think I am a paedophile or a pervert into horrible things, but I only want to start a debate about diversity. Most people are very welcoming when I tell them what it’s all about, and after all if you walk along the beach you see a lot more than I’m exposing!»

So let’s forget the non sequiturs for the moment and let me take up his challenge. The Gimp Man is right: a latexclad guy is uncommon and innocuous just like most mentally distressed people. But looking at him I couldn’t help but to think of the rubberdoll fellows I wrote about a few days ago, or the furries. All of them share the same dream: just to be accepted by society, without being feared on the basis of harebrained assumptions and prejudices. Seriously, can anyone really believe that somebody in a plushy cat costume constitutes a danger?

As a matter of fact, only very few bigots do. As the Gimp Man case show, or the experiences described in the rubberdoll documentary, or the giant furry parade of Anthrocon (the furry conventions), or even the Pride week… Most people really don’t care what you dress up like nor what your kink is, provided that you are not violating their rights. That’s only normal, isn’t it? So what’s up with extremists attacking unusual people? And why don’t we see more funny guys walking around our cities?

There are several reasons, actually. Some of them are related to social power, some to money – but in the end it all boils down to fear. Fear of oneself, to be precise. Have you ever heard those people whose argument against atheism goes: ‘those who don’t fear god’s retribution and damnation surely give in to their evil desires and indulge in all sorts of crimes’? As any sane and ethical person can see, that’s downright crazy. It doesn’t take Freud to understand that such a though can only come from somebody who feels those violent urges in himself, and who can barely keep them in check.

The same goes for sexual phobias. How would exactly gay marriage ‘destroy families’, for instance? How the anonymity of a latex hood would make you a paedophile? We could make dozens of similar examples, none of them even remotely logical – yet the media love and perpetrate these common fears.

The net result is that “ethically unbalanced” people find their autophobia (fear of oneself) confirmed and strengthened by every single repetition of those scaremongering lies… but the real danger lies elsewhere. To cut a very long psychology essay short, to be exposed to this unfounded and appearingly prevalent world view worms such fears into everyone’s brain – including the very subjects of the topic. The gay community, for example, knows very well the phenomenon of internalized homophobia, that is homosexual people hating themselves and disgusted by their own inclinations “just because it is normal to feel that way”.

Granted, statistics also show that there always be a certain percentage of people that won’t accept you no matter how gently and thoughtfully you’ll explain your harmless kink. Some of them, confronted with their own fears, are in fact bound to respond with a violent attack. But generally speaking – unless you behave like a maniac – the other person will just shrug, or be intrigued.

So, how can we fight internalized autophobia? If you feel brave, following the Gimp Man of Essex example might work. Yet a much more sensible plan of action is simply to learn how to recognize the social and psychological traps surrounding us. All it takes is a little bit of reading the right sources, and you will soon be able to distinguish real dangers – and there are a few – from scaremongering. Try to frequent diverse environments, try to stand up just a tad more for your right of expression.

This is not a war, nor you have anything to demonstrate. But you might want to win at least one small battle: the one with your own fears. It’s easier than you think, and you cannot imagine how good it feels to live without their imaginary burden on your shoulders.

Image courtesy of
Have an amazing experience or tips you like to share on SimplySxy? Drop us an email at editorial@SimplySxy.com!