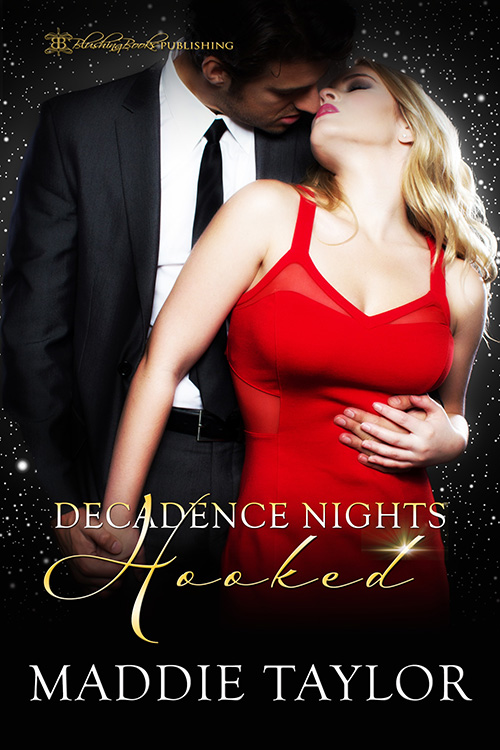 Legal secretary, Olivia Wright’s clock is ticking. Not her biological one, per se, but she feels she is running out of time to find Master Right. Two years from forty, she’s searched exhaustively. Several times she thought she’d found the Dom of her dreams, but Master Right had turned into Master Wrong, and her prince into a slimy toad. The last time, three years ago, she’d been sure had been the one, but he’d dumped her and nearly broken her. Now, after a long dry spell, she’s ready to try again. She’d given up on the man who’d caught her eye, the one she’d lusted over from 9-5, day in and out, who sat no more than thirty feet from her for the past few years. Yes, much to her dismay, her boss was not into her and despite her best efforts, and tightest skirt, he hasn’t spared her an extra glance beyond that required for their professional relationship. Resigning herself to an unrequited love, she attempts to move on, procuring an invitation to Club Decadence, hoping to find the Dom of her dreams.

Joseph Hooks is not your typical dominant. He’s NBA tall, with no police or military background to speak of, wears of all things tweed suits and on an occasion the dreaded bow tie. But behind his somewhat nerdy appearance and his round rimmed Harry Potter glasses is a handsome, green eyed, strict but sensual dominant who’s also hell on wheels in the a court of law. He’s wealthy, powerful, successful, and enjoys popularity among the subs at his club, at least those who don’t flee from the swishing sound of polished rattan. He’s also tired of searching for his perfect submissive and coming up short.

After a frustrating day of watching his gorgeous secretary’s delectable bottom in an incredibly tight skirt, he heads to San Antonio to blow off steam and maybe make a connection.

He thinks she’s terminally vanilla and straight- laced. She thinks he’s not into her or possibly gay, when he doesn’t react to her parade of tight skirts. Hopelessly oblivious to what has been staring them in the face for three long years, Joseph and Olivia embark on a search for love. Luckily, their separate and oftentimes rocky paths converge at Club Decadence. As a storm rages outside and things heat up inside, will Olivia’s frog finally turn into the Master Prince she’s longed for? Will her tight skirts and her presence at the club, be the sign that makes Joseph wake up, smell the coffee that she brewed, and at long last claim the woman he’s yearned for all along?

Decadence Nights, a new spin off series of novellas by Maddie Taylor, featuring brand new characters as well as a host of secondary characters that you met and fell in love with in the Club Decadence series. These are their stories and their happily ever after’s. We begin with Joseph and Olivia to get you Hooked.

“Skirt up, panties down, little one. You’ve worked for me long enough to know my requirements.”

“Yes, sir.” Reaching back with both hands, she tugged her skirt up her thighs, the snugness increasing as she gathered the material with trembling hands. The path became more difficult as it traversed her curves and began to bunch up over her rounded behind. Once she had it high around her waist, she paused. She’d worn stockings and a garter belt. Did he want those down too?

She opened her mouth to ask when he beat her to the punch.

“Stockings and garters stay, they look lovely against your creamy skin, but the panties must go. Pull them down to mid-thigh and keep them there.”

As she tugged down her French cut lace panties, the gusset got caught between her thighs. She had to wiggle, parting her legs a bit more to release them. As she shifted, she could feel the cool air brush against her wet pussy lips and wondered if he noticed how aroused she was. Could he see the evidence of her desire on the soaked crotch or smell her lustful scent?

“Good girl,” he murmured, stepping closer. She suppressed a groan at his praise, her control tested again when his warm hand ran over her bottom cheeks. Successful in one endeavor, she failed at the other as a shudder swept through her needy body.

You may also like...
Related Topics:Erotica, Excerpt, Hooked, Maggie Taylor

A lifelong reader, Maddie became a romance junkie as a teen with her first romance novel, The Wolf and the Dove by Kathleen Woodiwiss. From then on, she was hooked, and gobbled up everything she could get her hands on, whether contemporary, historical, paranormal or sci-fi. If there was romance to be found between a strong alpha male, and a sassy, adventurous and oftimes defiant yet loving woman Maddie was all over it. As an author, she stays true to those themes writing steamy erotic romance, with a side of kink, and adding elements of intrigue, danger and suspense to her plots.