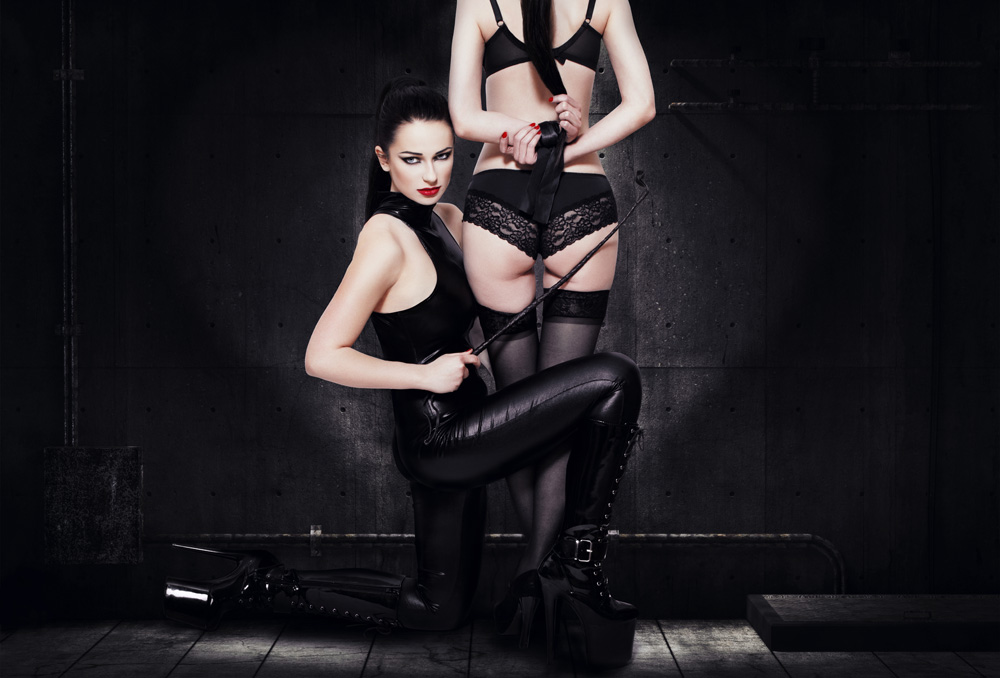 I strongly suggest you to click on both the above links to get an idea of what I’m talking about. Briefly put, however, the former documentary reveals how the “chateau” is in fact little more than a mobile home in the woods out of Albany, NY. The manager, known as Master R, is a former musician and a nature-loving nice chap who keeps a somehow homely court of like-minded enthusiasts treating La domaine as a safe haven from the pressure of “normal” life. They look like a decent, fun-loving bunch whose passion keeps the place more or less running despite the obvious lack of means and organization. As a matter of fact, the main story concerns a former slavegirl drafted into service as a professional dominatrix when the previous Lady of the house suddenly quit.

Conversely, Madame Robbe-Grillet is as stylish and aristocratic as it gets. A former actress and fiction writer, she never advertised her trade yet she does live in a castle-like manor and cultivates a detached, ritualistic idea of erotic domination games. Aesthetics and elegance are paramount, so much that the only submissives she still accepts in her presence look like models or A-list actors and actresses. She is the sort of person you expect to play chess on par with master players – while holding a philosophical conversation in which each witty metaphor is commented by the appropriate move on the board – as she sips an impossibly precious wine from a crystal glass held on a tray by a silent butler.

Each approach is the byproduct of its cultural environment

The French mistress took her first steps into the world of erotic domination in a country still recovering from the shock of WWII and adjusting to the new geopolitics. Dwarfed by the superpowers looming east and west of it (not to mention Britain, up north), to retain whatever grandeur it could France was desperately clinging to its old cultural identity. That included a strong sense of social classes and a fading aristocracy. To this day French sex personals frequently use the ‘BCBG’ acronym, literally translated as ‘good style, good class’ but actually meaning ‘rich, well-educated, high bourgeois’ – a socially accepted sign of self-entitlement inconceivable in most other countries. In such historic context appearances played a major role in reinforcing a higher social status, so attention to details and rituals was especially important.

La domaine’s approach is also the fruit of a culture focused on empathy: communication and care for everyone’s well-being were actively encouraged, as was looking at the person behind the job – or the role – he fulfilled. We are all rather familiar with this sort of milieu, so I won’t linger too much on it. Generally speaking, however, it is safe to say that in this case integrating every aspect of one’s personality is considered a desirable goal, content is favored over appearances, and openness is seen as a virtue.

Keep these observations in mind as you watch the documentaries, and you will easily see how each approach is the direct result of its surrounding culture, reflecting its values and norms. We can also imagine how embarrassing a meeting between Master R and Madame Robbe-Grillet would be. I doubt they could tolerate each other’s presence for more than a few seconds, and surely they couldn’t share a play scene if their lives depended on it. By the way, communication would also be a problem since she’d refuse to speak any language other than Parisian French, and the American documentary shows he can’t even correctly pronounce the French name of his own business.

These approaches cannot be moved out of their context

Eroticism has always idolized foreign lands and cultures, picturing them as paradises of sensuality. That’s however just a thinly-veiled hope that somebody, somewhere, has it better than us, since sexual dissatisfaction is also a constant throughout the ages. Arousal feeds on novelty, after all, so becoming inured to whatever is available is hardly surprising. This is why a New York trailer uses a fairytale-sounding name, and why in 2014 a woman still pursues the veneer of an early Nineteenth century lifestyle.

Yet again, it only takes a few minutes of watching the docs to realize that Master R would be very unhappy if he really had to live in an European castle, following its sober rituals and having to forsake his beloved country music and the football nights. Mistress Grillet, used as she is to eating very little to keep her figure – and never with clients in order not to tarnish her superhuman aura –  would similarly be horrified by all those communal meals, the overabundant portions and breach of personal space.

That being said, the different approaches of our protagonists once more remind me of how universal unusual eroticism is. No matter how dissimilar they look, they both pursue the same archetype of eroticized power imbalance. Or, in a less highbrow wording: sexualized master/slave scenarios are and always have been part of the human nature. This isn’t exactly a breakthrough discovery, either. Historians and ethnographers routinely find evidence of “kinky behavior” throughout the history of mankind, from ancient Greece to modern times.

Which brings us full circle to the debate from which I started this post. What’s with the supposed “BDSM protocol” so eulogized by that young lady, and by countless clueless websites? It is well established that the diehard “Old guard” and “training houses” myths are just a misinformed rehash of mostly fictional lore: the existence of one protocol all submission relations should conform to is equally bunk. Please create your own, if you like, but do not try imposing it on others who probably know better. Or do, come to think of it. As we have just seen, if it clicks with the cultural environment, you might as well manage to influence and shape of kink for the generations to come. For a while, at least.

You may also like...
Related Topics:BDSM, Dominant, Fetish, Lifestyle, submissive