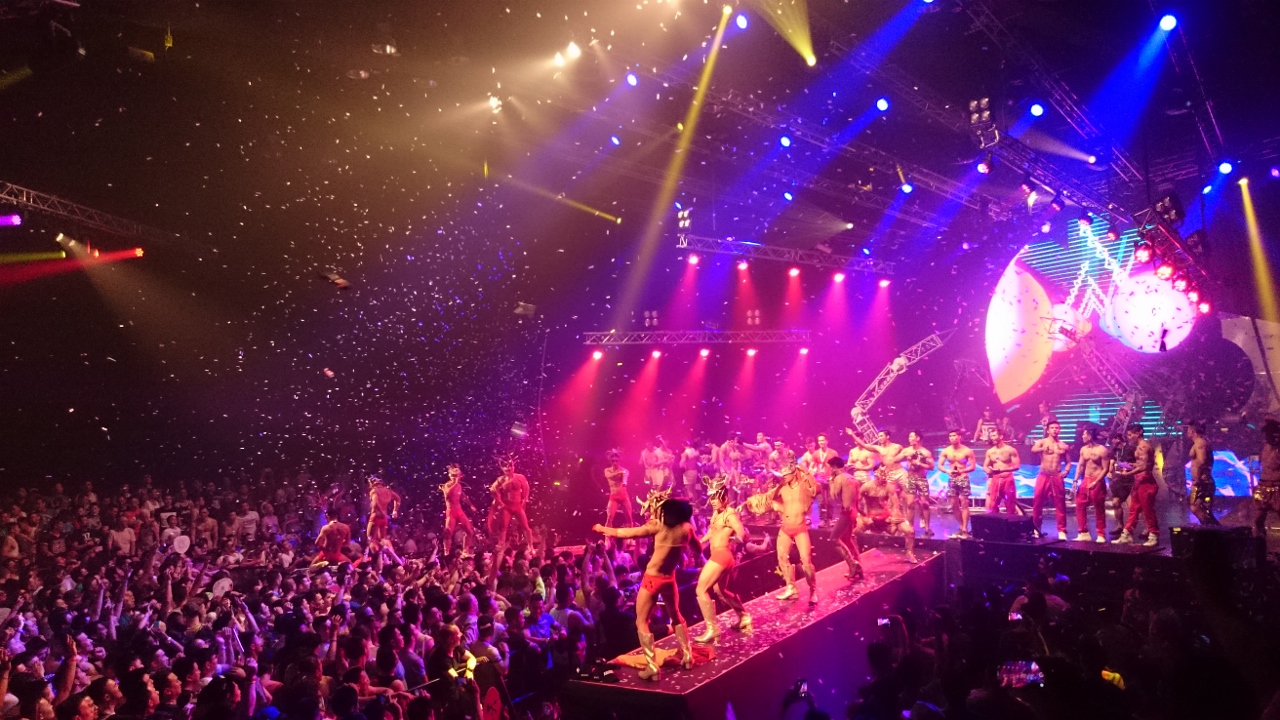 There is no dance floor big enough for gCircuit. Two weeks has pass since SongKran9 and the music is still beating in my heart. The biggest gay circuit party in Asia has truly lived up to its name and hype. The three day event spanning from 10th to 12th April includes three night parties and two pool parties. With an estimated six thousand party goers a night, I would describe the experience at SongKran9 a supersized “a night at the club”; the music was definitely spectacular, the crowd partied harder and the air was cleansed with pixie dust.

When you stepped onto the SongKran9 red carpet you are greeted by hot models from the different partners and sponsors of the event. From Atlantis Cruise, which does gay cruise in US and Europe, to Jack’d, one of the most popular global gay app, your eyes can’t help but wonder. Three booths stood out. The first was testbkk.org. They had an impressive boxing ring themed booth in sleek black and gold complete with sexy models in boxing attire. Their motto “Suck, F*#K, Test, Repeat” is a coy reminder that even though many of us are indulging in the process of sucking, f*#king, and repeating, we cannot neglect the importance of testing. For an NGO of HIV and STI awareness, they have an impressive PR campaign.

Next was Pure Bliss Weddings, a wedding planning company for LGBT that is based in Phuket. Not only was taking pictures in their beach themed booth fun, talking to the planners about the different weddings that are taking place in our region is an eye opener. It gives one hope that the society is progressing even though we do not have legalised marriage for our community in Asia yet.

Lastly was SongKran9’s own booth where you have the chance to meet and greet the GoGo boys who will be performing. The month leading up to the event, one only gets a sneak peak of who the GoGo dancers are from gCircuit facebook page. However, to have a chance to meet them is another thing altogether. The highlight is being able to meet SongKran9’s brand ambassador Peter Le. Despite the star power shrouding him, Peter is a very humble and stand up man. The way that he carried himself and interacted with his fans was nothing short of impressive.

Upon entering the dance floor, you will be amazed by its sheer size. Being there early, I was able to see how the void began to slowly fill up with the heat from party goers, the thirsty for fluids and the need for a rad beat. The opening DJs were fanatics. My personal favorite was opening DJ Louis T. He had the right mix of tribal music that could keep me going for hours. After experiencing the beat of the opening DJs over the three days, I feel that each and every one of them have the qualities to be a main DJ at the next big circuit party.

It was only when the dance floor was packed enough then did the performance for the WICKED party began. All the dancers and models who we meet earlier came on stage with more than enough confetti to ignite the night. From the elevated view of the VIP, one could see the intricate tango between the main DJ, the GoGo boys and lights show. Even the WICKED party was filled with the excitement excited of a virgin experience, the NEON party which is the second night’s party you can see that the GoGo dancers are really up their game. They brought about more energy than the night before and were able to maintain the high energy level dance after dance. Placing NEON party as a leader in the running for the best party of the five. However, the prediction was pre-mature. This is because the opening sequence of the PHARAOH party was the most erotic thing I have ever seen in my life.

The GoGo boys were dressed like Egyptian Kings.
They had sexy servants waiting on their every hand and foot.
These Gods dance sensually with each other in a vessel that descended from the heavens.
While their servants bathed them in milk.

The first thing that came out of my mouth when the performance ended was , “I think I just wet myself”. It is hard to determine which party was the best as each one was different. Even the pool party has its own set of fun. It was a nice break from dancing in the dark. The pool party encompasses the vibe of the water festival element of the actual Thai New Year. Having hundreds of topless guys in sexy swim trunks playing with water. Who can ask for more?

However, no party is perfect and if one were to look around, one would be able to find some unhappy and bored party goers. The SongKran9 teams still works tirelessly to put up a good show. At the front of the house, one can see the Drag Queens, Miss GiGi and Siva entertaining the new party arrivals. Even the PR director, Jom, has made it a tradition to come all dressed up in Drag. Much credit also goes to Yoss who designed the beautiful outfits for the GoGo Boys and Drag Queens. The countless tech and backstage crew were instrumental in ensuring that everything ran smoothly. Together with Tom and Oui, it is unquestionable that these folks are serious about partying and definitely know how to run a good show. With a successful ninth year under their belt, you know that when SongKran10 comes along next 15th to 17th April 2016, it is sure to be bigger, better, bolder … and a ton more of pixie dust in the air.

You may also like...
Related Topics:LGBTQ, SongKran9, Special Feature