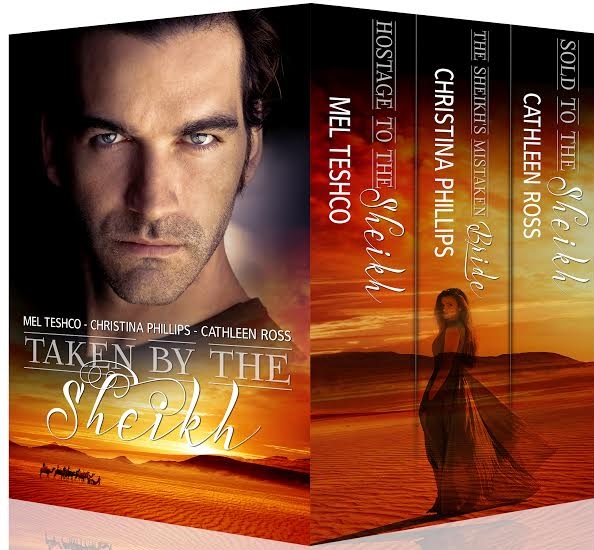 SimplySxy: Hi Christina, thank you for taking your time out and for sharing

your exciting upcoming project with us. Could you tell us more about Secret Confessions and the inspiration behind this story?

Christina: Thank you for having us! My brief for my Secret Confessions heroine was New Age/old money

. Willow came to me soon after Escape invited me to join the continuity. She’s been in love with her best friend Seb since she was 17, nine years ago. I had a lot of fun with rose petals in this story (and so did Willow and Seb!)
Cathleen: Our publisher Escape Publishing gave us the general storyline. I had to write a domme which I found terribly difficult as it is opposite to my nature. Mind you, I could learn from Nella and I think I’ve grown tougher since I wrote her. The dog obeys me sometimes now. Still working on my husband.
Mel: My storyline is a Cinderella type of story. The wealthy, handsome man who sweeps the penniless waitress and uni student off her feet. She’s the much younger wife in this series who adores her husband as much as he adores her. It’s a sweet romance with hot sex scenes. I loved writing this.

SimplySxy: Congratulations on Taken by the Sheikh for topping the best seller lists on Amazon UK. We would like to know about the collaboration efforts behind this series. How did the idea of having three novels with different writers come about?

Christina: I’d wanted to be involved in a boxed set for a while but had no idea how to go about doing it. Then Cathleen contacted me to ask if I’d be interested in a collaboration with her and Mel. The three of us have been good friends for several years and I love their work, so this was a very easy decision to make!
Cathleen: I really like Mel Tescho’s and Christina Phillips’ work so I asked them to collaborate in a boxed set. Mel was already writing a sheikh story so I said lets run with that. We have come up with other ideas too. Taken by the Biker, Taken by the Highlander, Taken by the Yeti.
Mel: What Cathleen said! But umm, Taken by the Yeti?? Lol—maybe we’ll do a purple prose book with lots of silly OTT characters!

SimplySxy: One of the challenges we can think of with having different writers is to keep the story and tone going on. How did Cathleen, Mel and yourself work to put everything together?
Christina: We worked out the overall story arc and figured out which bits of information needed to be shown in each book, and once we knew where we were going with that it wasn’t so hard to write our own stories. As for the cover, I wanted Henry Cavill 🙂
Cathleen: For some reason this didn’t seem so hard. We workshoped ideas. Christina is the most romantic of us all so we stuck her in the middle. I have the toughest hero so I rounded the books off, but for the next boxed set we will change places. I think the concept of having three brothers in terrible trouble worked well. Getting the right hero for the cover was the hardest because Mel fancies anemic looking heroes. Fortunately we all had one vote on the cover choice and Christina went my way, which was lucky because Mel’s choice of cover male really needed a good steak.
Mel: We did work really well together, and our critiques for one another were brilliant in different ways as we all have our strengths and weaknesses. If anything came up we weren’t sure on, or we had a brainwave, we’d email and then agree/disagree pretty quickly. We had to make certain we were all willing to give and take. And I still like my Johnny Depp lookalike cover model …

with our readers some insights into each of your individual novels? 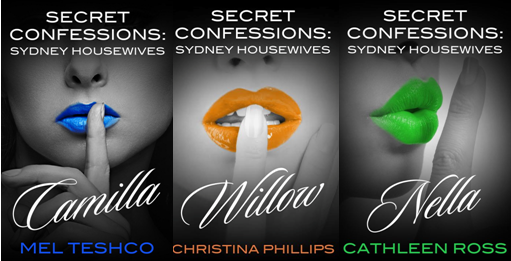 Christina: Willow is the daughter of a beautiful socialite who always manages to make Willow feel inadequate, and an A list Hollywood action movie star. Although Willow’s been in love with Seb for years, there’s a huge obstacle preventing them from getting together. But Seb is nothing if not resourceful!
Cathleen: My readers have said Nella is the most shocking of the housewives to read. It made me proud and glad I write under an assumed name. I really had to dig deep as a writer to come up with some of the things Nella did to her husband. I think I scorched my eyeballs.
Mel: Camilla is the young, innocent, gorgeous redhead who is a little too trusting. Her husband, Drake, only wants to protect his wife. The trouble is most of the women in her husband’s circle aren’t so enamored by her.

SimplySxy: What’s your favourite genre within erotica and why?

Christina: I’m currently into bad boy heroes. It’s part of the fantasy of taming the beast; that love brings even the baddest boy to his knees.
Cathleen: I’m really enjoying heroine abduction stories and zombies so long as the zombies are the external conflict and not the hero.
Mel: I love alpha heroes, particularly a hero with some kind of superpower—I’ve been reading a lot of dragon/phoenix/vampire (paranormal) stories and hope they make a big resurgence soon! I’m working on a paranormal story with a mutant hero.

SimplySxy: If you could bring one of your characters to life, which one would it be?
Christina: I still have a real soft spot for the hero of my second historical romance set in Roman Britain. Bren has been through hell and is so tortured I just want to wrap my arms around him and make everything better. I’ve recently had the rights returned to me on this book by Penguin and will be self publishing it (along with the other three books in this series) later this year.
Cathleen: I want to meet my captain of BASE, a novel I’ve just turned in to Escape publishing. I lived on a navy base for some time next door to a navy mine clearance diver. He had the best body I’ve ever seen and personality to match. Actually the truth is I can’t remember his personality.
Mel: Definitely my mutant hero—talk about tortured! Also, not many men could carry me in a hurry, but he’d do it with ease …

SimplySxy: Do you have any unusual writing rituals and how do you get yourself in the mood to write?
Christina: I don’t think my rituals are unusual, as I need to check my emails before I start writing. Then I need to check Facebook and maybe Twitter. Then I put some lip balm on (this helps me think …) As for getting in the mood, when you have deadlines poking you in the eye you just have to get on with it no matter how much you’d rather be doing something else!
Cathleen: I have to tire my dog out by taking him to the park, otherwise he slams down my computer lid with his paws, which is really annoying. I also have to go, Where’s the possum,” so he runs around looking for it, which buys me more two-handed writing time.
Mel: I like to write freehand where there are no distractions. I find at least half of my book is written that way. Also looming deadlines really tend to get you in the mood LOL.

SimplySxy: There are a lot of aspiring erotica/erotic romance writers who aim to be successful, which usually translates to having a best seller or being nominated/winning an award. What is your advice to them?
Christina: Read across the genre and also outside it so you’re aware of what’s out there. I belong to RWAus and highly recommend joining a writing organization for the support, encouragement and advice. Consider teaming up with critique partners or entering contests for honest feedback on your work. This not only helps strengthen your writing, it helps toughen your skin which is vital since when you’re published not everyone is going to love your work. And they will let you know…
Cathleen: Be prolific, work at your craft all the time. If you self publish make sure, you use a good book designer and editor. Be professional at all times. Practise, practise, practise.
Mel: Don’t just jump in and expect to write a best seller first go around (though this has been known to happen). Most authors spend years honing their craft, entering competitions and joining writing groups like RWA. It’s a HUGE learning curve.

) where two women and a man have amazing chemistry at first sight, but translating the sex scene into something emotive when they don’t know one another isn’t easy.

SimplySxy: A creative mind and vivid imagination can definitely bring a story to life, but there is definitely a ceiling to it. Surely experience between the sheets and in the bedroom is going to help in coming out with these stories?
Christina: Authors are always going to bring some of their own experience into their books, whether directly or indirectly. And when you need more, there’s the fun of research. For example, I’ve never been in a d/s relationship but that’s something I can research so my characters are authentic. Love and sex are two very primal human needs which make them fascinating to explore and read about, but the imagination is a wonderful thing and doesn’t always have a ceiling.
Cathleen: My husband is very embarrassing, telling anyone who will listen that he is my muse and while there are certainly some elements of truth in that statement, there is only so much the body can do. You still have to have a compelling story. The lovemaking has to be a plot point, moving the romance forward in some way. You can’t as an erotic romance author write a book full of vanilla sex. You do have to be more creative. Sometimes I do test out the husband guinea pig but not all the time. When writing my Secret Housewife, I wrote scenes I personally don’t find remotely erotic nor did I try out the things Nella did to her husband, so imagination can play a large role. It had to in this case because Nella was plain scary to me.
Mel: My husband wishes he was my guinea pig LOL. If only he could do half the stuff my paranormal heroes do (gusty sigh)—still, there’s bound to be a grain of experience in every sex scene.

SimplySxy: Thank you very much for your time and taking the effort to answer these questions.

From the hottest writers in Australia comes a scintillating new series. Enter the world of Sydney’s elite, and find out what goes on behind the doors of the most exclusive addresses in the country…

Meet the Housewives of Sydney. They are wealthy, elegant, poised, and constantly in the public eye. But what goes on behind closed doors, in the private homes and parties where the cameras and paparazzi aren’t welcome? Delve into the most personal details of their relationships, their friendships and their lives. The only question is: can you handle the heat?