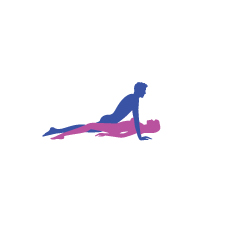 Carter Cruise … shares her views on the Sex Position—Missionary.

Description:  The classic Missionary position—lie on your back while he lies face down on top of you

What Excites Carter: There’s something primal about missionary to me. I imagine this is the way cavemen had sex long before tantra came along and that animalism is appealing. Also, eye contact is HOT during sex and missionary is one of the easiest positions to maintain good eye contact during sex. I also like the pressure of the man’s pelvic mound against my clit. I personally like to begin and end sex with missionary. In the beginning, it’s a good way to start slow and really get the mood going with lots of eye contact and kissing. At the end, when the guy is going to cum, he can take control of the speed and intensity, and the woman gets a good view of her partner’s climax.

What Doesn’t Excite: I think the reason this position has gotten so much bad press is because couples use it just to “get the job done,” when they aren’t feeling kinky or creative. If it’s used that way, it can become vanilla and boring!

Best locations to do it:  Any horizontal surface, but for comfort and to really get the most out of this position a bed or other soft surface is preferable.

Ways to Spice it Up:  Just because the man is in the dominant position here doesn’t mean he has to do all the work! The woman can grind back against him so the position becomes a more mutual exchange, instead of just lying there and taking it. Since the woman’s hands are free, take advantage of that! Scratch your partners back, head, or explore other erogenous zones like the ears during a more slow paced missionary, and use your hands to stimulate your clit during a more fast paced session. You can even hold a vibrator on your clit so that when combined with the internal stimulation from the cock, this produces explosive orgasms. If you’re feeling kinky, have your man hold your arms down above your head in pseudo-bondage. Also, placing something like a pillow under the woman’s backside for support increases friction on the clit. This is a great position to practice mutual orgasm!

Carter’s Verdict: Missionary doesn’t have to be boring! It’s a versatile position that can be slow and sensual, or fast and rough. Lots of skin to skin and eye contact make it intense and romantic, and clitoral stimulation from the man’s body or woman’s hand makes it a good position to reach climax for both partners!

You may also like...
Related Topics:Carter Cruise, Missionary. Sex Positions