Gay culture is often associated with promiscuity, acting on sexual impulses and difficulty in controlling sexual impulses. We gays, call the promiscuous phase of our gay life as the “Whore phase.” This phase usually lasts for couple of years after coming out of the closet. Sometimes, this phase lasts longer for some gay men. Some gay men are sexually impulsive and compulsive.

Some individuals have a great deal of difficulty controlling their sexual behavior. They have frequent intrusive thoughts about sex and repeatedly engage in sexual behavior that can become out of control. This can result in numerous problems –

Sexually impulsive behaviors which can include “acting out” sexually in illegal or inappropriate ways can be seen as being influenced by environmental triggers such as a sights, sounds and smells. With sexually impulsive behaviors, there is an inability to resist an impulse, tension before engaging in the sexual behavior and a sense of release upon exhibiting the sexual behavior.

Alcohol and drugs can sometimes be seen as catalysts for these sexual behaviors because, as a rule, they can lower inhibitions and, as such, can lead to an increase in sexually impulsive behaviors that can be harmful to an individual or to others.

The primary difference between those individuals who engage in sexually compulsive behaviors and those men who have active sex lives with multiple partners is that rather than thoroughly enjoying their sexuality and sexual activity on all levels, the individual is, instead, engaging in sexual behaviors to avoid feelings of tension and anxiety.

Coleman has identified seven types of impulsive-compulsive sexual behavior listed in Table 1 below. Click on image to enlarge. 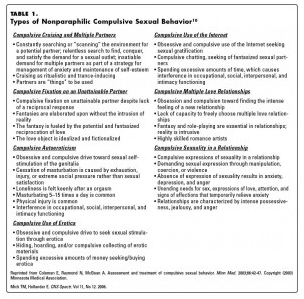 Depending upon the circumstances driving the sexual thoughts and sexual behaviors, being either sexually impulsive or sexually compulsive are, in fact, two alternative ways to describe what is commonly referred to, in the nomenclature, as sexual addiction.

How does a person’s being in a steady romantic relationship affect sexually impulsive or sexually compulsive behaviors?

Whether viewing hours of pornographic imagery, engaging in lengthy online sexual chats or cyber-sexual video-chats, perusing online personals or phone apps for potential sexual partners or driving to meet individuals for sexual encounters, the individual is receiving a steady flow of these powerful neurochemicals and, because of the immense feeling of pleasure and reward, the brain wants these chemicals to continue to flow.

This article has been republished with permission from Deepak.
Please visit Deepak’s website  to view the original post and more of Deepak’s works.

Images courtesy of Shutterstock.
Join SimplySxy’s forum discussions now on Society
Do not miss another article on SimplySxy!  Follow us on Facebook and Twitter for our latest updates!

I work in IT as a Senior Web developer during the day and a blogger and writer by night.I am currently writing Adult erotic novel. I have a Masters degree in Anthropology and Genetics. I have been living in US for over a decade and have lived in Canada, India, UK and Europe. I am openly gay and single right now. My blog desigaylife.com is a holistic gay blog that focusses on Health, Wellness, Relationship advice, Sex tips, Ayurveda, interviews of positive Gay role models, Indian food and herbs, Transgender issues and homosexuality in India, other LGBT issues and spreading awareness. I specialize in Ayurveda, specially in Indian spices, body types in ayurveda and food one should be eating based on body type. I also specialize in advising on Gay relationships and Gay Kamasutra sex. My hobbies include: Photography, biking, hiking, swimming, writing, cooking, taking road trips and making new friends. I also tutor for ACT and SAT Math.