Pink balloons gather and aflutter; nothing short of spectacular.

The sixth annual Pink Dot SG was held on 28 June 2014 with a turnout of 26,000 participants. It is most encouraging and heartening that while this year’s Pink Dot SG took place amidst the controversial Wear White Movement, it continued to garner the support of the public and even set to achieve yet another groundbreaking turnout. While most, if not all of the participants are familiar with Pink Dot’s advocates, little are aware that this sixth year running event is also one of Singapore’s homegrown pride and joy. Pink Dot SG is a social movement that was started by a group of individuals—straight and LGBTQ—who care very much about the place of LGBTQ individuals in Singapore. It is an initiative that seeks to build a truly inclusive home that celebrates diversity and inclusiveness, and has since grown into an annual highly anticipated event and even inspired numerous overseas counterparts such as Pink Dot Okinawa, Pink Dot London, Pink Dot Anchorage, among others.

The path towards true freedom to love is never easy, much less for LGBTQ individuals—as seen in the history of LGBTQ in Singapore. In December 2000, Asia’s pioneer gay personals website Fridae.com was formed and it’s first large-scale outdoor dance party held on 8 August 2001; one day shy of the country’s national day. This proved to be a test of the social boundaries in a society that upholds traditional Asian attitudes. Subsequently, such events were banned and this called a temporary hiatus to all other public dance parties of such nature. The arts scene in Singapore itself was slow to warm up to the idea of movies and plays showcasing elements of alternative sexuality and it was not until January 2008, that Golden Village—a cinema operator based in Singapore—organized the very first “The Love and Pride Film Festival” dedicated to LGBT films. On May 16, 2009, the first Pink Dot SG was held in the city-state and while it was attended by a mere 2,500 people, the event received international media attention and coverage and it has never looked back since. 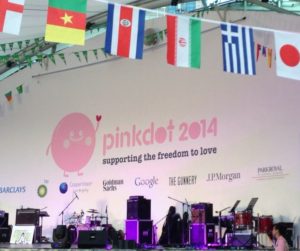 With a strong team of dedicated organizers and three very talented celebrity ambassadors—Sebastian Tan, Janice Koh and Brendon Fernandez—backed by the sponsorship and support of major multinational companies such as Goldman Sachs, Barclays, JP Morgan and Google, this year’s Pink Dot SG only goes to show the scale that this event has taken on. While it is easy to immerse oneself in the fun-filled activities, entertaining performances and the annual Pink Dot light up, the underlying importance of this event cannot be taken for granted. Apart from being a “feel good, positive event”, there is a constant need to address the issue of diversity within society and to be conscious of the fact that Pink Dot SG is not a “be all and end all” for LGBTQ. This serves as an opportunity for us to reconsider today’s definition of acceptable social norms for as Janice Koh has so very aptly said, “There was a time when left-handed people were persecuted. Pink Dot starts from the ground; touching the hearts of the community. The LGBTQ group is only deemed to be truly accepted when the Pink Dot movement ceases to exist.”