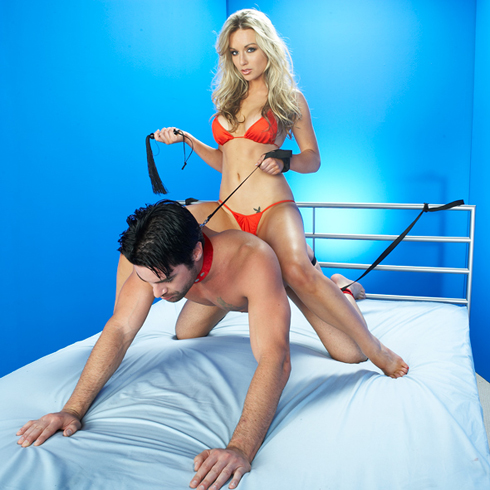 I was recently amused to see the following statement on Wikipedia which claimed that “71% of heterosexual males preferred a dominant-initiator role”.  Wikipedia referred to a study done by Kurt Emulf in 1995 as to the source for their statement.  I am here to tell you that in the last fifteen years of my experiences as a Dominatrix, and as the Dominant Partner in all of my relationships with men, the men whom I have come in contact with have proven to me that it is exactly the opposite of that published study.  In fairness to that study by Emulf, I have to wonder which demographic group of men he studied.  I have found that typically, male “Blue Collar” workers might fit the mold he presented.  They usually have to put on the macho front and try to act like they control “their little woman”.  Whereas, in almost all cases, the “White Collar” males who I have come in contact with almost all showed an attraction to Dominant Females.  These men, in most cases, jumped at the opportunity of serving a Dominant Female and catering to her needs in private.

Female Domination is a relatively new term, and has primarily gained popularity over the last twenty years as more and more women have moved away from the stereotype of an “at home Mom and home maker”, and have moved into the business world with positions of increasing responsibility.  While the emergence of the woman in the business place has been taking place, at the same time, another event has been transpiring.  More and more of the men who are in high pressure positions within the business world have been looking for an outlet to relieve the pressure and demands which were put on them in the business world.  These men have found that pressure relief valve, in many cases to be submission to a Dominatrix or allowing their wife or partner to institute a Female Led Relationship at home.

When you think of Female Domination, the first thought that jumps to your mind is that of Leather-Clad Women in black stockings and high heel pumps with stiletto heels, and rightfully so.  This is the image that most men who are looking for a Dominant woman have in their minds.  That is exactly why I and most Dominant women dress in Leather, Black Stockings, and High Heel Pumps or Boots most of the time.  It serves two very important purposes.  First, it fulfils the desires of the men who come to us looking for Domination Sessions.  Secondly, when attired as mentioned above, it allows us to see the men who are attracted to us on a daily basis, and gives us an idea as to whether or not they might be a good candidate to serve us as a slave.  When men can’t take their eyes off of you when you are dressed in a dominant manner, it’s usually a clear tip off of what they are attracted to.

I can tell you from personal experience, and you can also read the actual account of what happened in my book “At Her Beck and Call”, which illustrates my point.  I met my husband/slave on the Internet about thirteen years ago, and determined on the first date, that he was a good candidate to become the subservient party in a Female Led Relationship.  How?  Very simple!  I noticed right away that he could not take his eyes off my nylon clad legs or high heel pumps.  When I let my dress slide up and expose the garter belt holding up my sheer nylons, he was transfixed on the image.  My hunch was right as soon as I questioned him as to whether he preferred a woman in garter belts and stockings or a woman who wore pantyhose.  He was embarrassed, but he admitted to me that he found my attire to be a lot sexier than a woman wearing pantyhose.  Later, back at my house I confirmed that he was a good candidate for a Female Led Relationship when I pushed his face down to my high heels and he immediately began to worship them.  It didn’t take me long to move our relationship along to the point where he surrendered all control over to me and became my adoring slave.  I am happy to report that we’ve now been married for over ten years, and Troy is still always there at My Beck and Call.

I get this question from women all the time.  There has to be more than just the dress and attire, doesn’t there?  Absolutely, there has to be the correct mindset on the part of the woman, first and foremost.  The woman has to want a man who will get down on his knees, worship her body, be compliant with all of her wishes, and cater to all of her needs.  The woman in the relationship has to take charge and make Female Domination a reality in her relationship.  It is not hard to do at all.  Most women are held back by that old stereotyped image which I mentioned previously.  Those days are gone, and the faster every women realizes it, the better off all females will be.  Men will let you have control and will do your bidding, if you will just take the initiative and make that Female Led Relationship happen.

I am a strict believer in male chastity, and I have kept my husband locked in a Chastity Tube for many years.  He has learnt that he will never get a release and orgasm unless I am totally satisfied with the number and quality of orgasms he has given to me, and totally pleased with his behaviour in our marriage.  I will devote another article strictly to the how to’s on male chastity, but I need to mention one important fact here.  Once a woman locks up her partner’s cock in a Chastity Tube, magic happens.  The male will become more adoring, more attentive to the women’s needs, and becomes more obedient to every wish that the female should utter.  Men are not controlled by their mind.  They are controlled by what is between their legs, and when women realize that, take control, and institute forced male chastity into the relationship, the woman finds quickly that she becomes the Queen of the household.  I’ve found that to be true ever since I locked my husband into a Chastity Tube, and I’ve also received the same feedback from every woman who I have talked with who did the same thing.  The move pretty much guarantees a successful Female Led Relationship.

You do not have to be a professional Dominatrix like me to have your man kneeling at your feet, worshipping your body, giving you all the orgasms you could ever desire, and loving every minute of serving you.  You just have to take control today of your relationship and make it happen.  When he comes home tonight, put on that short leather skirt, garter belt, sheer stockings, and killer high heels.  See what happens.  I’ll bet that you can have your mate down on his knees in minutes kissing your heels, worshipping your legs, and waiting for your next command!

You Need Orgasms
You Have More than One Partner? : An Intro to Non-Monogamy
Advertisement